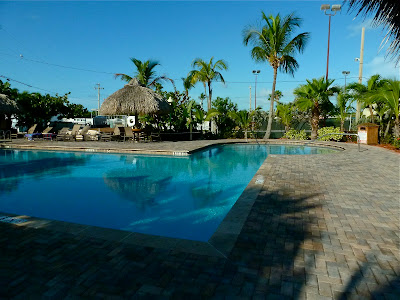 Sparky and Eldo were sitting at the pool today, reading and people watching, and all of a sudden, two ladies JUMPED sky high out of their lounge chairs and were staring directly in front of them. One was a mom, the other was her twenty something daughter. The daughter's eyeballs were as big as golfballs and the two gals were frozen, eyes glued to something in front of them. "DID YOU SEE THAT?" "Yeah! What the hell is it?" I'm thinking, scorpion, huge spider, big strange flying insect of some sort. 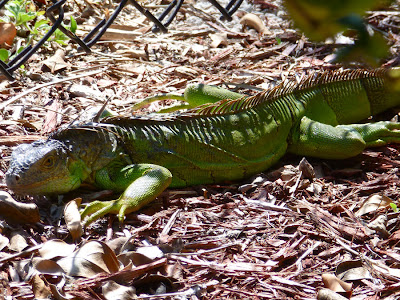 I look up, and there's about a two and a half foot green iguana making his way across the pool deck directly in front of them. The two women didn't scream but they were scared to death of it, thinking it might bite or something. The iguana, who shall now be known as Iggy, didn't like the attention he started to get, especially from Sparky, who had run back to the rig to get her camera and was now back snapping away, coming ever closer to Iggy, along with a couple of other people trying to get a photo. The two women made a beeline for the opposite side of the pool, giving Iggy a wide berth, which was fine with Iggy. Iggy was VERY nervous and more scared of them than they were of him. He flared his throat thingy which is supposed to scare predators and postured up and down, up and down with his head, to make himself look larger and more threatening. That didn't scare Sparky, she kept trying to get just a LITTLE bit closer to get her photo. Back as fast as he could, into the bushes he went, nervously watching everybody. He finally slithered through the fence holes to the other side of the pool complex after Sparky followed him into the bushes. She just HAD to get a photo of an iguana, never having seen one! 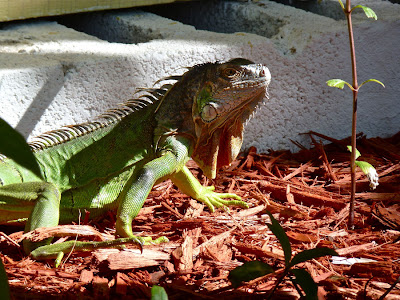 The two women kept asking a few minutes later, "Are you sure he doesn't bite?" "They really are scared of people?" And finally, they started to relax and even got out their camera phones to take pictures of him when he came back out a little bit later. The two gals were from Ohio, we compared notes about no iguanas in Indiana and Ohio except for pets. After their initial scare, they told us a story about seeing a dolphin in Marathon, and how the dolphin was playing with a very large fish it caught, throwing it up in the air a few times and just playing with it. Sparky was all ears! Ah, well, a visit to Marathon, another place, another time....

It seems that green iguanas are a problem around here...they are a feral population. Sparky learned that feral means an animal was once domesticated and now has become wild. Green iguanas are purchased as pets, then owners have let them go when they don't want them any more and now they are munching their way through Florida. They cause severe landscape damage as they love to eat plants and flowers and their burrowing near seawalls can cause sea wall collapse. Sparky also learned that iguanas CAN bite when cornered or captured! Glad she didn't know that at the time. Did you know they also can detach their tail when caught to get away, then grow a new one? Cool!

No other creatures other than a couple of tiny geckos showed their faces today at the pool. Some guy at the pool today said that when he was in Mexico, the iguanas, much bigger ones, would be found swimming in the pool! Yikes!

You gotta love the Keys....slower pace, slower way of life....even the local cafe cat has got the idea.... 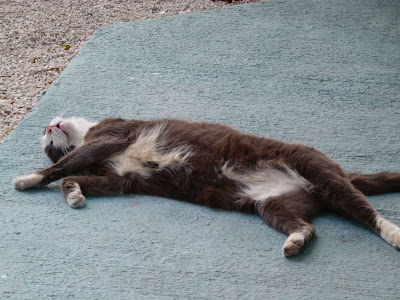 See you tomorrow in paradise!
Posted by Jeannie and Eldy at 11:45 PM