We're not talking about RV park curfew, (we actually had one somewhere where we stayed, you had to go in your coach after 10:00 PM!) we're talking about a bank of lights in the motorhome that went out and stayed out. We had an interesting experience today that could have been quite expensive, but thanks to the husband of the park manager here at Florida Grande, ended up being pain free as far as the wallet goes....

We have a set of eight ceiling lights in our living room that run behind the driver's seat thru the dinette area. They have been flickering somewhat over the past few weeks. At first, I thought one of the lights was going to burn out. I'd look up and try to figure out which one, but couldn't tell. I'd ask Eldy if he saw them flicker, and he'd say no. OK, I think I'm just imagining things. Finally, the lights went out, all eight ceiling lights above the living room sofa and dinette section and at the same time. We checked the fuse box, changing a few fuses after trying to decode which fuse went with which set of lights--some labelings on the box were ambiguous. Changing the fuses didn't work.

I was worried we had a short somewhere. Short = possible fire in my mind! The lights are on the 12 volt system and run off the battery, but there still could be some sort of short somewhere. All the other lights in the living room worked. We pulled off the switch cover, thinking maybe we had a bad switch. It looked like the wires were a little loose to the switch connector. Nope, that wasn't it....I went down to the laundry to check a load and ran into Bruce Hagan, the park manager's husband. He's an electrical engineer by profession. I ran our problem by him, and he said he'd bring down his tester and check things out to see what might be the problem.

A short time later,  he came back and checked the on/off switches to make sure juice was coming in. It was. Then he took the electrical schematics plans back with him to study them for awhile. Ever look at those things? It would be a miracle to figure them out if you had an electrical problem! Guess they are for the repair guys when they come out. Back he came....He really wasn't sure what the problem was except that there was a grounding problem. 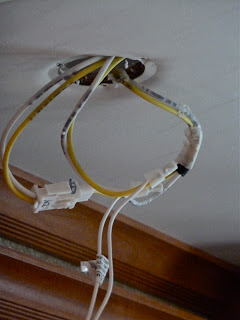 To make sure, he checked the first light on the living room ceiling light set by the fridge and sure enough, that's where he discovered a disconnect in the ground wire. He and Eldy went outside and checked if all the ground wires were connected in the bay, and they were. Eldy called Tiffin to get more specific information, where to find the junction box to check where the ground wire connects to that set of ceiling lights, because the junction box was not at the first light by the fridge. After the third call relaying information about our coach and what the guys had found so far, Tiffin told us that the junction box is in the first ceiling light receptacle behind the driver's seat. Bruce jiggled the connectors at that light, and the lights flickered on and off. He gave a good push to the connection, the lights came on, and remained on. YAY!  Woo-hoo! No service call needed to an expensive RV repair service or electrician! Bruce refused to take any monetary compensation for his time. Eldy is one happy camper! Problem solved and information gained in the process! You always hope for the easy solution, and this time we were lucky!

Lights are back on! Thanks so much, Bruce! 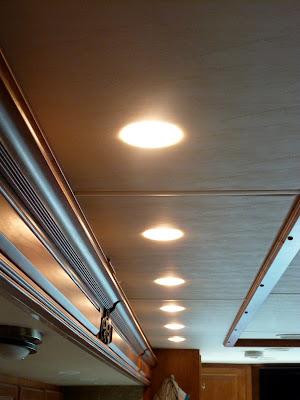