Key Deer, They are Here and So's the Beer! 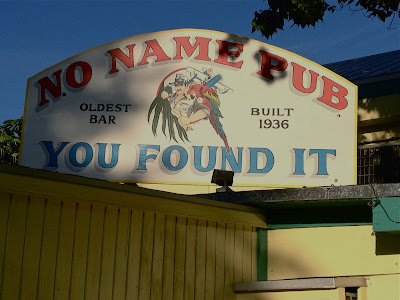 Our first day in Big Pine Key was a beautiful one...temperatures in the seventies during the day, and temperatures in the seventies at night...After exploring Sunshine Key's facilities, we decided to find a bar and grill that was recommended by several different bloggers....No Name Pub in Big Pine Key. It's not that easy to find, as the sign indicates....But find it we did, actually, without too much trouble.

This is a cool little pub with some historical interest. It used to be a general store with a brothel upstairs back in the thirties. There are hundreds, if not thousands of dollar bills plastered all over the walls and ceiling.....We had a great grouper fish basket that we split because it was so big, and they have delicious seasoned fries that they call silver dollar fries...They were great, the grouper was GREAT! And Eldo says the beer was great! I forgot my camera tonight, so we'll save some inside shots of the tavern for another time.

I'm sure we'll be back for the food, the beer and now, here are the deer! They are all over No Name Key, all over the little town, in people's yards, and at dusk, they came out tonight to feed and see what the humans were up to. We must have seen at least twenty of them, and they aren't skittish around folks, which makes me think people have fed them which is against the law. 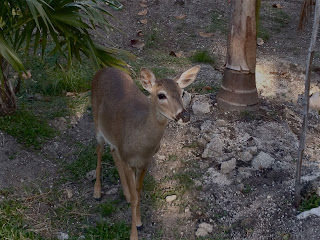 Here's a link to size, weight and information about the little Key deer, which we think are endangered, or at least they are protected in the keys. Wish there was a way to show you a comparison of the size, these were quite small. They weigh 2-4 pounds when born, so that gives you an idea of what they start out as. I saw a REALLY tiny one in the bushes, and he still had spots, so I think it was a fawn. It was very shy, so I think the ones that are brazenly walking the streets are probably mature deer. 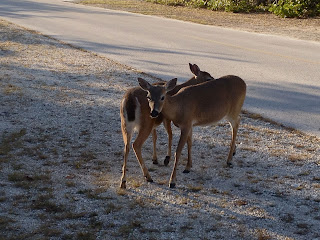 These little bucks thought nothing of using their hooves to knock over the trash cans and try and get inside.....I watched the one in the rear do that just after I took this photo! 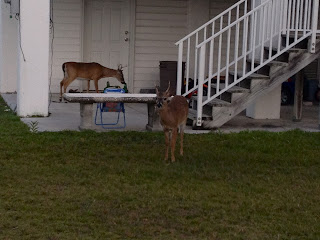 And another nice little buck nibbling around the trees in the neighborhood.... 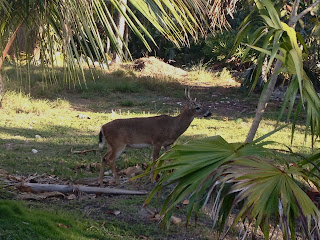