I always thought Florida was green all year round and had lots of flowers in the even in the central part of the state. I was surprised when I saw all the dead grass and trees that had seemed to had lost their leaves, or were still even shedding as I rode my bike around the county roads these past few weeks. It felt like fall back in Indiana the way the leaves were raining down all around me as I rode my bike. Central Florida has a "dormant" period, I guess! Grass takes a break from greening and growing, deciduous trees lose their leaves just like they do up north, and shrubs take a break from all that blooming. Up until now, even the golf courses looked like they were struggling and were quite brownish looking.  BUT-----
Lo and behold....things are "waking up" around here...shrubs are sending out shoots and blooming in places, the ornamental grasses are sending up shoots, and we see little tiny leaves on some of the trees that have been pretty bare up till now......The pastures are greening up, too! 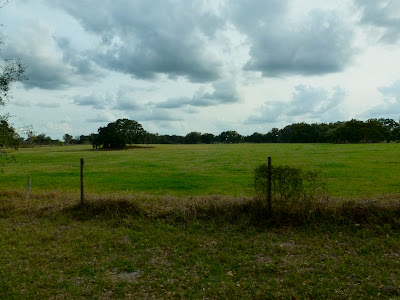 I even saw my first redbud tree here in Webster, which made me just a teensy homesick for the budding flowering tree species in Indiana that soon to start showing their colors up north, providing spring weather tempts them. I'll bet they have a ways to go up north yet...... 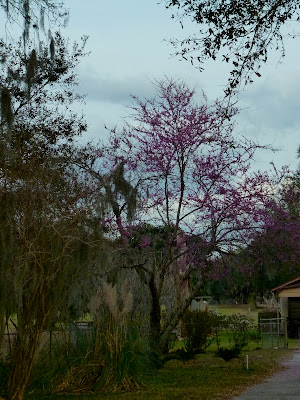 The weather has been consistently WONDERFUL in Webster the whole month of January and now through February. Daytime temperatures were in the low sixties when we came the first of January, and the lowest nighttime temperatures were in the low thirties in January. That didn't last long. Daytime temperatures have hung around the sixties to high seventies, even a few eighties the past couple of weeks, and the lowest nighttime temperatures for February have been in the fifties. Great sleeping weather! We have not hardly used our air conditioning...we open the windows early in the morning, start up the Fantastic fans, and they do a terrific job of circulating the air throughout the day.

We have less than a week to go here in Webster...We will be very sad to leave our new friends, and our wonderful neighbors, Nick and Ritchie Boersma. But when you know you are going to the Keys, and going to save a TON of money doing it (using our Thousand Trails Florida Max Pass), the "hitch itch" is starting to grow.......See you later!
Posted by Jeannie and Eldy at 11:45 PM

Email ThisBlogThis!Share to TwitterShare to FacebookShare to Pinterest
Labels: spring in central Florida