No Chicken Little today, just some sky divers falling from the sky today, dropping in on Florida Grande late this afternoon...Pretty exciting stuff for this little town of Webster. How this particular park got so blessed to have some jumpers come in for some practice has to do with a few of the residents knowing the jumper training facilities and some of the sky divers. This is not something you see every day, so we just HAD to check this out!

Apparently, Team Fastrack, a skydiving team, is practicing for the upcoming air show season. They have chosen Florida Grande for an air practice jumping session and are arriving today at 4:45 PM just in time for Happy Hour! Now, I call that perfect timing! They must have heard what great happy hour parties Florida Grande throws every Friday.  Or else they heard about the food!

According to a news release which I am pretty much quoting, the sky diving team is part of a bigger operation out of Coleman, FL, called Start Skydiving. Start Skydiving offers tandem jumps and accelerated freefall training at very reasonable prices. (Uh, Sparky, I can see where you are going with this....says Eldo nervously.....Wasn't that bobsled ride back in New York enough of a thrill for you, with the probable neckaches for days afterwards being minor whiplash? Didn't we decide risk taking adventures were a no-no for any future thrill seeking adventures?)  Hm-m-m-mm....Sparky is contemplating......(And wasn't the zip line in New Hampshire where we went full speed into the end of the ride with a resounding JERK! enough of a scare?) We-l-l-l-l....I guess.....But I did read somewhere that an elderly couple in their sixties celebrated their 50th wedding anniversary by doing a tandem skydive, hurtling 120 m.p.h. towards the earth. I told Eldy that, and he said, and I quote: "I'd pass out." Sparky said she'd probably pee her pants. The couple in the article said they are going to do another sky dive on their 75th anniversary. Woo---eeeeeeeee!

The cool thing about this jump today is, a jumper is flying in a 1700 square foot American flag, the largest flag being flown by any sky diver in the U.S. This flag has been flown into Ellis Island and several NASCAR races and other aviation shows. And so, at 4:45 PM today, here we were anxiously scanning the skies and watching for the wind streamer to come out of the plane signaling that the three jumpers were ready to jump. 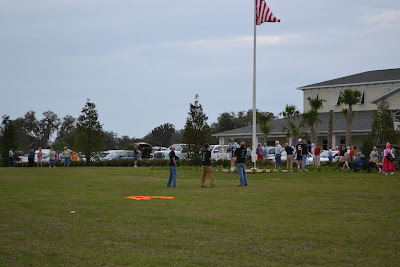 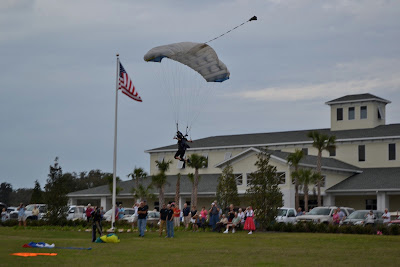 Naturally, they have to do a little advertising....That seems VERY reasonable! 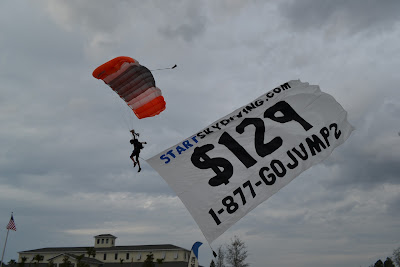 And here's the special part....the guy with the flag.....It's attached to his foot! 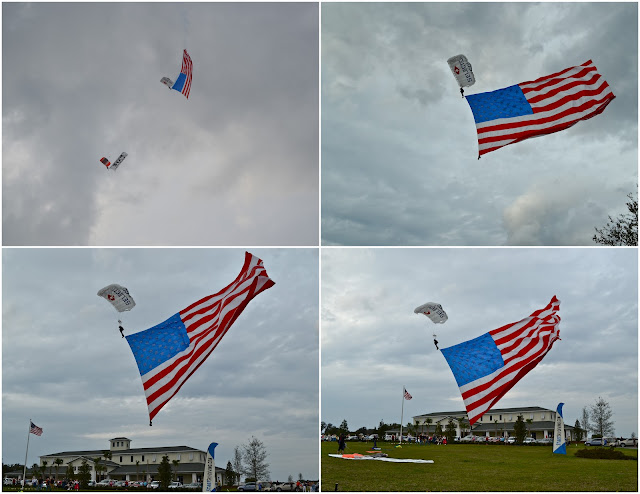 Here's another cool part.....One of the jumpers is a young lady! She has been jumping for 9 years she said. She said she gave her dad a sky dive jump for his birthday recently. His reaction? He'd "never do it again" but he's glad he did it. Now he asks her every year what she's going to get him for his birthday and how does she plan to give him a heart attack THIS year?  :-) I believe she said that she holds 3 (?) world records or is part of the sky diving team that holds three world records! Woo-hoo! You go, girl! 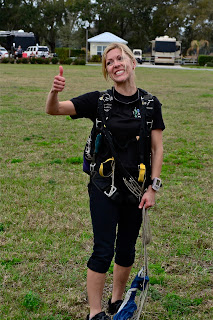 She had a camera attached to her helmet, I think they all did. What a rush that must be! (Uh-oh! I can tell when my Sparky is getting ideas in her head....) They were all invited to happy hour, so they packed up their chutes...... 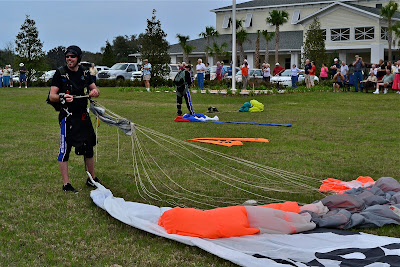 It takes a team, Team Fastrack, to get these guys and their gear in the air and safely back down again.... 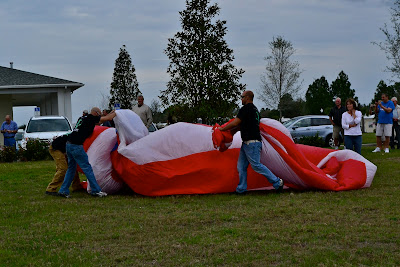 Time to head inside.....After all that planning and sky diving, they were hungry! We loved their shirts..... 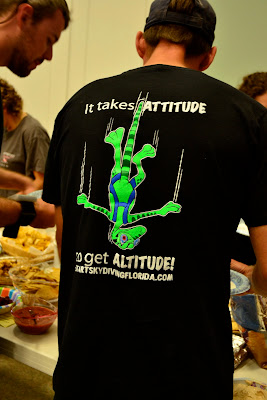 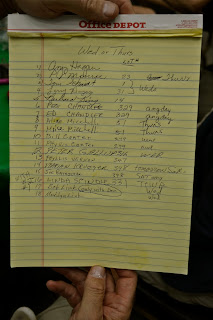 And apparently, Florida Grande has PLENTY of attitude, because TONS of people signed up to go jumping in the next few days...like 18 senior citizens, some in their seventies! When the list came around, Sparky started asking questions, a few too many, because Eldo's ears perked up, and he when he thought Sparky was seriously considering going, a big, loud, "WHA-A-A-T???????" came out of his mouth....

This gal is going, and she didn't even have to think twice about it! Well, after looking at this photo, maybe she IS thinking, "Good Lord! What have I got myself into?" 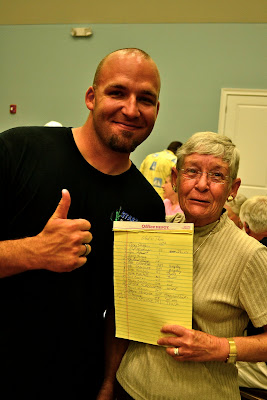 Seriously, how bad could it be with two hunky guys holding on to you, one on each side, guiding you down and telling you what to do, and taking care of pulling your chute the first time you go out? Sounded pretty good to Sparky! If she wasn't saving for a kayak, and an ipad 3, she'd be in! 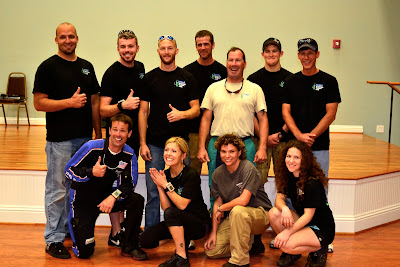 We thank Team Fastrack for coming out today, and I'm proud of my fellow senior citizens for having the guts to take the PLUNGE!  No fuddy duddies here at Florida Grande, that's for sure!
Posted by Jeannie and Eldy at 10:45 PM