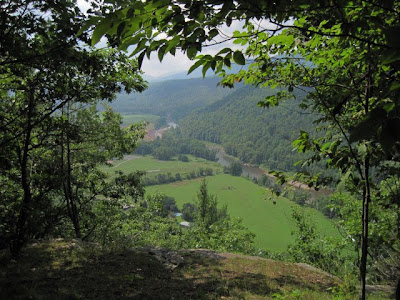 When New York has its very own set of carvings on the side of a mountain...a small mountain, but mountain nevertheless. The set of carvings is called Pratt Rock. Zaddock Pratt was a very successful local tanner and later a congressman (he ran the biggest leather tannery around back in 1843) and he was full of himself. So full of pride, when a jobless man asked him for a handout, Pratt asked him what he did for a living. The guy was a stonecutter, so Pratt said in exchange for a place to stay, Pratt asked him to carve his life story. Twenty-eight years later, the stonecutter was still at it, the story goes, when Pratt died. The carvings include Zaddock Pratt, his son, a horse, an arm holding a sledgehammer, and a circular stone carved with Zaddock's motto on it. The trail starts off route 23 near Prattsville, NY, close to the junction of route 23, and route 23A. The trail is a STEEP climb to the carvings. Unfortunately, what we thought was the .5 hiking trail to see the carvings ended up being 3/4 of a mile hiking trail to the top of the mountain, which heretofore, will remain nameless because we don't have a clue what mountain it was! Probably Pratt's Mountain. At any rate, the true trail branched off to the right of the first resting point we came to, but we missed it going up..and up...and up....so the photos today are of the view on top of Pratts Ro 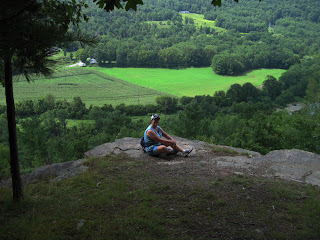 cks.
The true trail is unmarked, unmaintained, and extremely narrow. We're talking about a dangerous trail with a crumbling rock path, overgrown with weeds and poison ivy and it would be easy to take a misstep and have a serious fall. We discovered the correct trail on the way back down, after hiking the mile to the top and back, so we explored it briefly. I would not recommend this hike to see the carvings as the trail was so poorly taken care of and seemed risky to just about anyone attempting it. We never did see the carvings, but there's a kiosk at the picnic grounds down at the bottom of the trail with photos of the carvings, so you can get an idea of what they are like. I think we do need to see Mt. Rushmore!
We will be glad to get going Wednesday morning to Tioga, PA. This part of New York where we are now, near the Catskills, seems to be a very depressed and dying area. The motels are shuttered, the homes are in disrepair, and the local towns are struggling. The town of Tannersville on Rte. 23, on our way back to the campground, was an interesting little town, with cool restaurants and offbeat, quirky little stores that would be fun to explore. We 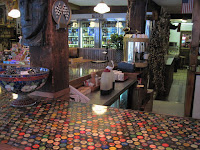 ate lunch at The Last Chance Cheese Shop and Restaurant. The restaurant is listed in Zagats travel guide--more for atmosphere than quality of food, in my opinion...good food, a little on the expensive side, but the antiques inside were wonderful to look at. There was a side room full of hanging antique musical instruments which caught Eldy's attention very quickly. (He used to be a buffing supervisor for Blessings Music in Elkhart, IN) so we took a couple of photos of them and the restaurant. A little further down, we saw a beautiful, Ukraine Catholic Church. I just had to get a photo of it! 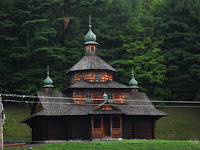 Tomorrow is about a four hour drive from Catskill, NY, to Tioga, PA. Hope we have some shade for the next few days!
Posted by Jeannie and Eldy at 2:34 PM