Can you say fast? 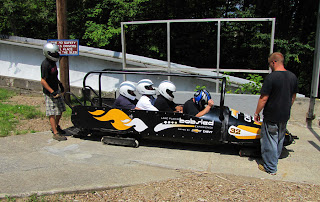 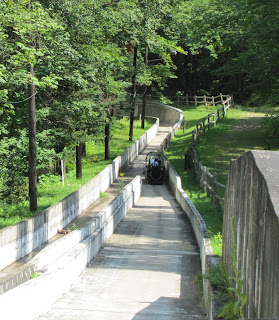 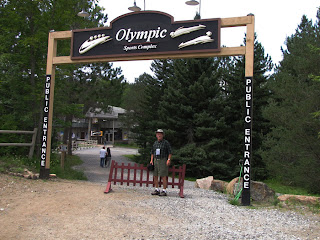 Can you say FOOL???!!!! We checked out the bobsled ride today, and I mean not only did we check it out, we RODE it! At last post, I believe I said, "No way, Jose!" and I meant it. But after hearing that a 96 year old man rode it and enjoyed it, I thought, "WELL! I can't let a 96 year old guy outdo me! Must not be too bad. Two G's of force on you at the last turn? That doesn't sound too bad." Eldy graciously offered to pay for it, so I thought, well, why not? If I throw up afterwards, I won't feel quite as badly as if I had paid for it myself. I drove a stock car once at the age of 40 at least 75 miles an hour around a track, I thought I certainly could handle a top speed of 55 miles per hour! Well, yes and no...the first indication of that this was probably not a good idea personally for me, was the warning you should not go on it if you have neck problems. Having been rear ended at the age of 18, when an x ray technician clucks their tongue and states matter-of-factly, "I see you must have been in an accident at one point in time", that means I have neck problems. My neck really doesn't bother me much, it just sounds like a bunch of rocks grating sometimes when I turn my head. But hey, I'm used to it, I'm 60 years old and my body talks to me- a LOT. I kept thinking about the 96 year old guy, so I said what the heck! They outfit you with heavy, HEAVY duty helmets, and get you into the bobsled. It's like packing you on a toboggan sled. It was just Eldy and I, the driver, and the brakeman for our ride. I told myself, "Please don't make a fool of yourself and scream in the brakeman's ear." I'm still not too nervous at this point, as you start slow, with the brakeman running and giving you a pushoff and then he jumps in the back, just like you see on TV. What you DON'T see on TV is how fast you get going to 55 mph with the side walls and what seemed to be the TOP of the side walls of the run coming at your face within seconds of the pushoff. The other thing you don't see on TV is how jarring the ride is...that heavy helmet is rockin' and bobbin' on your head, there's 2G's of force pushing on you in the last turn, and I'm thinking..."Oooooohhhhhh, this is SO NOT A GOOD IDEA!" They tell you to hang on tight...NO PROBLEM. I'm holding on tight so my neck doesn't get whiplash from the helmet. I have lockjaw, shoulder lock, armlock and back all locked up by the time we get off the ride, 15 seconds later, and Eldy did, too. The adrenalin kicked in AFTER I got off the ride..I could barely walk, my legs were so rubbery. They take your photo at the end right after you climb out of the bobsled, and it was all I could do to not collapse and fall down so I had to lock my knees to keep upright. I asked Eldy after we got out of earshot of the employees, and said, "Did you see that wall coming right at your face in the turns?" He says, "No, I was just looking straight ahead." THAT'S the secret, if you want to do the ride. All I could see was the white walls coming at my face the entire way down. Was it worth it? To be able to say you rode the bobsled on the track the Olympians practice and actually were on in the 1980 Olymmpics, yes, it was! Would I do it again? HE-double hockeysticks, NO! Both our necks hurt quite a bit afterwards, and we decided, that we aren't going to be that foolish again. If there's a warning about necks, hips, or any other body parts, we'll probably say, "No, thank you!" and take photos of other people doing it instead. That, and it was quite expensive! ($50.00 a person gets you a tee shirt, a US team bobsled pin, a free photo, and a one year membership to news about the bobsled team, bragging rights, and probably, a stiff neck). Sigh!
Posted by Jeannie and Eldy at 6:34 PM