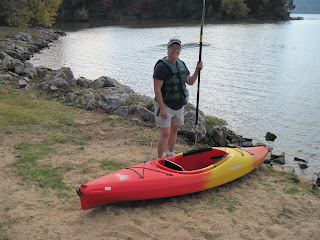 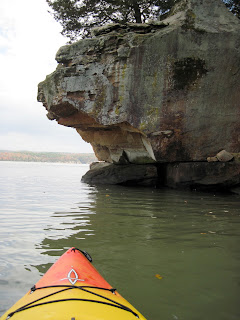 Off to Lake Dardenelle this morning, to rent a kayak....I've had several kayaks in the last five years that I have been kayaking, but decided that to carry two of them all the time on top of the car would be a bigger hassle than the number of times both of us would actually get to use them. Lifting them, strapping them securely, hoisting them up and down has gotten harder as I've gotten older. I had nifty saddle racks where you just have to lift one end of the kayak up against the car, then scootch the kayak forward, sliding it on top of the car. That worked great for me as a single gal, when I schlepped all over northeast Indiana and lower Michigan, kayaking on my own. But Eldy has a bad shoulder, and we were worried about theft and a number of other things with carrying kayaks all the time, so I sold my "Tupperware" river boat, and my cruisin' Eddyline....now the kayaking bug is biting again....I'm looking at inflatables...we're heading to Florida soon, and I just miss being out on the water....But for now, renting is a great option. 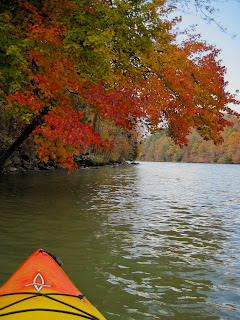 Since Lake Dardenelle State Park offers kayak rentals, I headed out today for a few hours of paddling pleasure on the lake. I much prefer rivers, but hey---I'll take what I can get for the beauty and the enjoyment of being out on the water..$14.00 for four hours, very reasonable....Eldy has only been out a couple of times in a kayak, and I was going to paddle hard today, so he had some other things he was going to do today (like heading to another county for some shopping? Our county we are in is one of many dry counties in Arkansas) while I'm out paddlin' a plenty. I rented a little shorty kayak, 9 foot long, and had my own carbon-lite paddles so off I went! Three hours later, in I come, happy and tired....here is what I saw while out and about on Lake Dardenelle....at least 6 great blue herons that really got ticked off when I was beneath them and near them. I couldn't quite get fast enough with the camera to capture one, but certainly got scolded with a very loud, "A-W-W-C-K, A-W-W-W-C-K!!!!" I also had an "ARE YOU SERIOUS??!!!!!" advertisement moment....you know the TV commercial where people are so absorbed in their phones that they are missing some really important moment of their lives because they are messing with their smartphones? I had my phone with me, and thought while I was floating for a moment in the kayak, I would take a break and call a friend.  After talking for a few moments, I heard the "AW-W-W-W-CK" call, and darn, if a great blue heron didn't swoop out in front of me just a few yards away...I missed the perfect camera op to capture a shot of one very close!  Aw, darn!  Are you SERIOUS??!!!  Yes, I am! 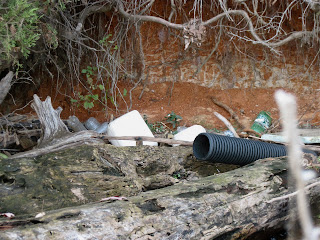 What else did I see? a lot of trash on the riverbank...it was sad to see that. I wish I had brought a trash bag with me, and I would have done some cleanup. I saw a skeletal remains of some animal, probably a small mammal, saw these interesting remains as well, have no idea what they are! I also saw what I thought was a baby beaver, running along the river bank in and amongst the rocks. He would stop, look at me as if to say, "What??!! Are you still following me? Nuts to that!" and off he skampered into the rock crevices. I saw some pretty wildlflowers on the bank--maybe coreopsis, but not sure...overall, it was a relaxing way to spend some time with nature...next time, I will put my phone well out of reach, just for emergencies.....see you tomorrow...
P.S. thanks to all the people who are following our blog, we really appreciate you taking the time to read what we have to say.....Jeannie and Eldy
Posted by Jeannie and Eldy at 7:16 PM