In a Pickle in Arkansas

We took it easy today..Uh, well, I took it easy....Eldy washed the RV, which was quite a job...we have lots of different things to use when washing the RV, but none of them ever seem to be quite right...you buy an extension pole, but then it's not long enough. You buy a brush head to go on the extension pole, but then you find out the fibers are too harsh on the paint (maybe)...you buy one kind of RV wash, only to find out a different brand is recommended. Sooner or later, we will get it dialed in right...but we sure have the washing stuff assortment to choose from!

We drove over to a nature trail today called Bona Dea. We decided after walking it for awhile, it was too tame for us! We'd rather bike it. We'll come back another day with our bikes to do it. It was very beautiful, tho'.....it's a park devoted to trails and a sanctuary for wildlife and birds at the same time. There is a great publication they publish all about it, and the names of all the possible wildlife you might see are listed in categories and the frequency that you might see them. This park is run by the US Army Corps of Engineers as well. 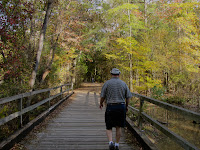 As we were biking thru our campground this evening, we saw many deer making their way across the center of the campground to their feeding areas at dusk....we also saw something interesting going on next door at the city park near the dam. I heard a loud PLOP, PLOP.
It sounded like giant ping pong balls being hit back and forth. I looked over to the tennis courts, and what do I see? But a group of people LOOKING like they were playing tennis, holding RACKETS that looked like square shaped ping pong rackets, and PLAYING on a downsized tennis court. What were they playing? PICKLEBALL!  We had seen tennis courts up north with Pickleball signs on them, and wondered what the heck pickleball was, but nobody was playing on the courts where we saw the signs. Well, LOTS of people are playing pickleball in Arkansas. It looked really fun. I guess this is a great sport for older folks who don't want to run around as much, as the pickleball court uses a shrunk down tennis court. You can play indoors or out, and there are two different sizes of ball holes for that. You can use existing tennis courts and just paint fainter green lines on them for the shrunk down pickleball court. In the match we watched today, there was a young gal in her twenties playing with her dad in his 60's. It's a sport where you don't have to run around as much so older people can really play just as well on an even playing field with younger folks! Cool!  So --you usually play with two on each side if you don't want to run around as much, and if you do, you can play it with one person on each side, like singles in tennis. Rules are different from tennis, I didn't get the hang of the rules this evening by just watching, but I discovered that it looked like a LOT of fun, it was great exercise, and I think I'd love to try it!  (Oh, no, here we go--more equipment to stash on board, says Eldy). But, he's just as interested as I am, so we look forward to learning and trying it out soon!   See you on the pickleball court tomorrow! Well, not THAT fast....I'm going kayaking in the morning! 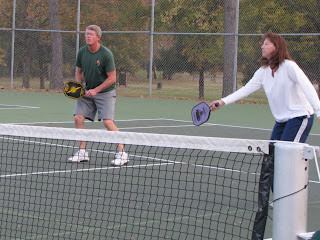 Posted by Jeannie and Eldy at 7:28 PM

Email ThisBlogThis!Share to TwitterShare to FacebookShare to Pinterest
Labels: Pickleball in Arkansas