Eldo didn't! I didn't!....after doing the bobsledding thing this summer in Lake Placid and both of us getting neck pain from being whipped around the track, we weren't going to do anything crazy like that, but some guy did last night...I remember this type of activity as being very popular when I was a student in college. I had thought nobody had this mechanical bull thing around any more after a probable slew of injuries and lawsuits...But, darned if there wasn't one sitting outside Toby Keith's I Love This Bar and Grill and they were actually using it last  night. There's a second one at another casino. Doesn't seeing that guy flip over his head just make you wince? They had a giant bean bag under the bull to catch the rider when he fell. Not sure that would keep somebody's neck or back from getting messed up, but he was a young kid and so much more flexible. Right guys? I just shook my head watching the kids get whipped around.....The band was fantastic at Toby Keith's I Love This Bar and Grill. They were called "Nervous Presley" and they were from Nashville. The female lead singer had a knock-you-out, belt -em out country voice, she was excellent. All the band members could sing, and one of the guitar players sounded just like Vince Gill. We really enjoyed their music and even danced a little. It's a beautiful, relatively new bar inside Harrah's Casino. 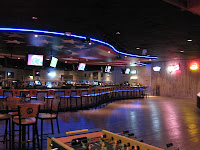 Yesterday it rained the entire day. We drove around and looked at all the different decors of the casinos, and we signed up for rewards cards in hopes of earning some kind of prize, and Eldy did. He won $100.00 of slot play so later today, we are going to go have fun on someone else's dime! We are really not into gambling, so this was a nice bonus for us. Later we explored a little bit of the Riverwalk area...a nice park with a walking trail, and the Tunica Museum on the grounds. The walking trail sign cautioned in very large print--"WATCH FOR POISONOUS SNAKES AND BITING INSECTS." Uh, we passed on the short walking trail today. The snakes were probably out sunning themselves on the trail or hanging in the trees. That's also what the sign said! The Tunica Museum was REALLY interesting and very impressive! It sits on a bluff above the Mississippi river. Everything you ever wanted to know about the Mississippi River, the delta, the floods, the blues, the habitats of the river creatures, the fish, the cotton workers, the leavees..they've got a fantastic set of four aquariums, and that very cool, awesome lighting where you walk in and go..."O--o-o-o-h...this is so cool!" It's low level light so all the exhibits are well lit and draw your attention; it's colorful, and you learn all kinds of things just by going thru it. As an almost senior citizen, (sometimes I qualify, sometimes I don't) I'm excited about this stage in my life where I can choose to learn what I want. So much of our learning these days is dictated by tests, by limited funds for school curriculum enrichment, but now I can learn whatever and whenever I want to! It's fun!  What did I learn today? Here are just a few bits and pieces, but still thought they were interesting nuggets of info:

1) Dogs were used in European warfare and against and the Indians.... The explorer DeSoto used trained mastiffs and greyhounds to attack uncooperative Indians (as if there weren't enough insults and injuries committed against them already!) and to track down escapees. Very few ever successfully escaped. Mastiffs would bite and tear any enemy who got in their way. Greyhounds reportedly could chew the face off of a man.....(my 7th grade boys would be paying rapt attention right now...) 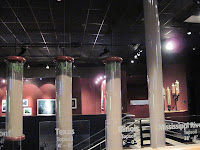 2) The Mississippi Delta has at least 28 ft. of rich, fertile topsoil covering the flatlands compared to say, Texas, which only has 4 feet. There were cool columns set side by side and in scale to visually demonstrate the difference....wow! 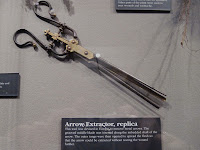 3) I saw an arrow extractor from early medicine days...the center part slides along the shaft into the wound, then the sides spread apart the flesh so they can pull out the arrow--e-e-w-w-w-w! (I think those 7th grade boys would still be listening!)

4) There was a set of visuals using marked cement columns on the grounds of the museum showing how high the floods can be and what percent the chances are of having more devastating floods. It truly gave you a reality check on how high the Mississippi floods when it does. And finally, here I am standing in front of the aquariums, and I just thought this was kinda cool, being able to see myself in the reflection. I wonder, who is watching whom?! 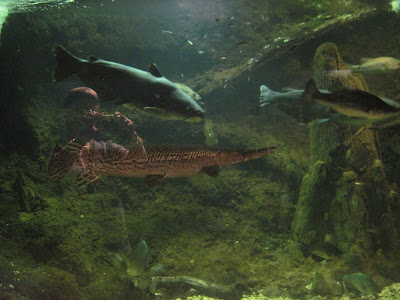