We finally made it back to the Pheasant Hollow Winery yesterday and they were open after all....Beautiful log cabin, nestled in the woods nearby Rend Lake...I guess it's one of the biggest wineries in southern Illinois. We had a great conversation with the manager, Bruce Morgenstern,  about grapes, wines, sizes of tanks carrying juice, and how many tons of grapes and blueberries he buys a year. Try 50 tons of blueberries a year....he's a small fish in a big pond as far as bigger wineries, but that sure sounded like a LOT of blueberries to me! He goes to the Pickin' Patch, in Plymouth, IN to get his blueberries. That's just down highway 31 in Indiana from South Bend, my old hometown where I raised my kids. The Plymouth Blueberry Festival is a huge event there every year Labor Day weekend. What was most interesting to me was, Pheasant Hollow doesn't grow their own grapes, they buy them from everybody else and make their wine in the basement! Sounds like a budget operation, but no, the basement is really big and there are two buildings devoted to making wine. He said the land is too valuable to put grapevines on it...I could see why with all the mini oil rigs pumping oil out of the ground in the county there....you could see oil drill rigs in southern Illinois in the darnest places, in the middle of a farmer's field, by the side of the road, etc. They were all over the place. There could have been an oil rig on the winery property for all I know!

I tried to ride my bike yesterday, I really did! ...I went to Rend Lake College, and on the way into the college grounds, there were hunter's trucks everywhere at the sides of the road.  Once I got to the parking lot, a couple of college kids warned me that the trail goes into the woods and they recommended NOT going on the trail. Ri-i-i-i-g-h-t! Then I tried Wayne Fitzgerrell State Park . The trails were closed because they were having a handicapped hunters' controlled hunt on the premises. Rats! Back to the campground I went. I did find a section of the Rend Lake Trail I could ride that was out in the open until I reached this sign entering the woods: 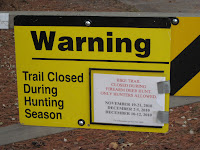 Back to the campground I went. I finally got the message!...Riding on the way back to our campsite, I saw a lady driving down the road. She opened the car door and out comes a big husky type of dog a runnin'. The dog proceeded to chase the car down the road a bit, the lady would open the car door again, and back in the car bounded the dog. I thought she was corralling a lost dog or keeping the dog from coming after me, but nope! She was exercising the dog. I watched her open the car door again and out came the dog who chased the car very willingly quite a ways down the road again, then back into the car again, hangin' out the window and panting like crazy trying to catch his breath.  I really thought it was sad that she didn't get out and run/walk with the dog herself, but being the big dog that he was, he would have probably would have been running her instead of the other way around as fast as he wanted to go. Her loss, the dog's gain....and I patted myself on the back because I was out on my bike doing my best to try and stay in somewhat good shape in order to pig out on Thanksgiving Day!  Photos below are of our campground at Gun Creek Recreational Area. By the way, that 8.00 a night was just for electric. They did have other sites with water, electric and sewer, but they weren't open this time...See you tomorrow.....

Posted by Jeannie and Eldy at 7:16 PM