What a day today! I talked Eldy into doing the George Mickelson Bike Trail, so I chose a ten mile loop, it's one of the shorter distances with less change in elevation and passes mainly thru rancher country...the Rocheford Trail Head, distance about ten miles one way and elevation change about 700 feet. What I didn't realize was the reason it was so easy to pedal the first five miles, was because it was the DOWNHILL elevation. It didn't look like it, so I was pedaling merrily along, but Eldy was busy calculating how soon we could turn around and go back--he KNEW it was uphill all the way back. Bless his heart, we did do almost 11 miles today, and he has a bad knee. Not only that, but we were about 5500 feet above sea level, so it's a tougher ride when you are not used to the elevation! I go out biking on my own quite a bit, but I had to stop a lot and rest on the way back. I'll have to pamper him a little extra because it means so much to me to go out biking on such a beautiful trail as this South Dakota bike trail. We saw some other trailheads on the Mickelson Trail while we were out driving today...some run along creeks and mountains, some of the trail heads go through old railroad tunnels and bridges. It's a 109 mile trail of crushed limestone and gravel through beautiful countryside and towns with many historical points along the way.

On our ride today we saw an old gold mine entrance, and part of the mine's operations across the street. If you notice the interesting disk siding and roofing on the red building, those are bucket lids from cyanide used in the mining process. There are quite a few of these cyanide lids dotting outbuildings and roofs in South Dakota, they didn't know back in those days!...We saw the entrance to the goldmine across the bike trail. Seeing the original gold mine and its wood framed entrance makes you think about how risky gold mining must have been in those days. 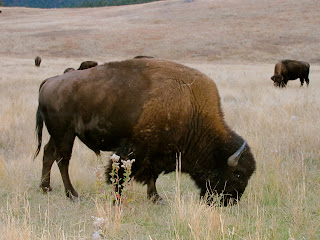 After we came off the trail, we headed late in the afternoon back to Custer State Park. We were hoping to see the bison/buffalo up close and personal this time, and boy, did we! More than a hundred of them dotting the landscape right by the road, two different herds in two different locations. Then we went around one curve as we came close to exiting the park, and one big mama was plodding up the center of the road, following the yellow line. We couldn't get around her at first, so until she was good and ready to leave the road, we played follow the leader! You should have seen me sticking my head up through the sunroof window taking photos of them! It's a tight squeeze up there! Another car passing by gave me the thumbs up for not getting out of my car but coming up THROUGH the car to get close shots. We saw some beautiful bucks out grazing and more antelope, too, on our last pass through the park. We negotiated the Needles Highway again back towards Mount Rushmore, which is lit up every night for about two hours after dusk. It was beautiful! We want to caution anybody traveling the Needles area in the fall at dusk and early evening, as the deer were everywhere! They either crossed the road in front of us, or were right at the side of the road watching us.

It's rainy and extremely windy today and we're been so buffeted by the winds that we pulled in our slides last night. We are traveling today to Sioux Falls, S.D.