Warm and Sunny in Branson, MO

I've always heard that Branson was kind of like a smaller Nashville, TN. Many stars located their theaters here, and there are great entertainers and shows year round. We have never been to Branson before, and it's been a little bit of a disappointment. If you like towns with store after tourist store after store, with theaters and palaces dropped in between, this is the town for you! Traffic is so jammed up on the two lane road thru the main street in town, the street is called the "Parking Lot". It's very difficult to move thru town at certain times of day. There are a couple of alternate routes that we discovered later today after trying to get thru the center of town which definitely help direct the flow of traffic around the city. There are restaurants competing for your dollar everywhere. Tickets for the shows can be quite expensive, even with local discounts. 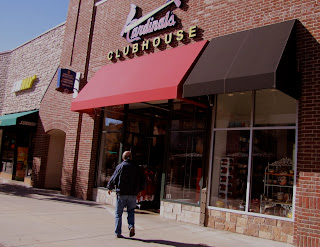 There is a nice shopping area down by the shores of Lake Taneycomo, called Branson Landing. It's a little more upscale shopping district along a row by the river. I'm not much of a shopper, hence my lack of interest in all these stores. Not much gets my heart fluttering, except for window shopping at Coldwater Creek. About the only thing that gets Eldy's heart a-goin' faster is Cabela's sporting goods stores, Bass Pro Shops, the St. Louis Cardinals or Notre Dame football. We were moseying along today at a snail's pace, enjoying the warm sunny day, when all of a sudden, I hear an "Uh-oh!" which is Eldo-speak for "YEAH, baby!" He rapidly picks up the pace, leaving me in the dust, (very unusual) and starts boogeyin' towards a store...the St. Louis Cardinals store. I  know he's good for at least 20 min. there, so I head over to the kitchen store. When I come out, he's still in the Cardinals store, looking at Cardinals red tee shirts for the grandkids. I say, "Honey, the kids aren't St. Louis Cardinals fans." He firmly replies, "We MAKE them Cardinals fans." I'm sure the guys understand that very well! We leave the store without buying anything, but Eldy is going to return before we leave Missouri. "Uh-oh!" which is Jeannie-speak for, "We're going to drop some bucks in here!"
There are three lakes here--Lake Taneycomo, which is definitely more like a river, Bull Shoals, and Table Rock Lake. We haven't explored those yet, nor what's around them. I feel hemmed in by all the touristy stores and traffic, I'm missing hiking paths and biking trails. There are some great golf courses nearby, that's a possibility. We don't fish, otherwise the lakes offer that for people who enjoy the pursuit of fishing. We'll see what the next two days brings..it's beautiful here, sunny, 78 degrees, Eldo is wearing shorts! See you tomorrow on Halloween!
Posted by Jeannie and Eldy at 4:20 PM