Wow! It's the wild, wild west all right....Winds gusting to 40 mph., and the gusts are going to get higher thru today and tomorrow. Chance of s-s-s-s-s-snowshowers Wednesday! (I hate to say the "S" word this early in the fall, even though I love it!)  Eldy drove six hours yesterday to keep ahead of the bad winds and rainstorms coming towards the east. The wind and rain storm followed us all the way, but with the wind at our tail end most of the way, we got decent gas mileage (9.2 mpg.--that's actually good for a new diesel!) and made good time. We got settled in last night in Sioux City just as dusk and the hard rain fell. We are back at the Tower Campground, fairly well sheltered compared to out in the open back at Elkhorn Ridge Campground. It looks like bad weather is everywhere in the midwest. We'll probably sit tight and wait out the wind here in Sioux City. Big branches are falling down around us, just hope nothing big hits the motor home! 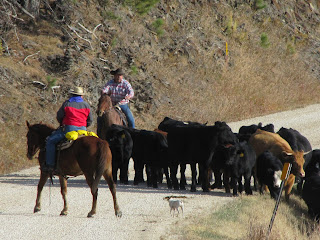 On our last day in Spearfish, S.D., we were driving out of Custer State Park, and we just happened to see a modern roundup on a side country road right by the highway...it was cool to see modern cowboys doing their thing with the cattle. Guess they were herding them into holding pens, maybe for shipment or loading onto cattle trucks in the near future. They were whooping it up, herding wayward cattle into the pens. There was a tiny dog, he looked awfully small to be helping herd, but he could have been in training, or actually doing his job! He looked like he just running around trying to be helpful. One of the cowboys had a lasso ready, just in case. When the only time you see things like this is on T.V., it's cool to see it really happening and in a natural way, in everyday life. Welcome to one of South Dakota's many facets of life!

Eldy got his South Dakota driver's license today...no hassles now that he had a certified copy of his birth certificate. What's interesting is that in Indiana, he was given a restricted license because of a problem with his left eye (lazy eye). In South Dakota, he has zero restrictions because it was his left eye and not his right. Had he had a lazy right eye, there would have been a restriction put on his license...Hunh?....not sure of the logic on that, but I bet someone could clue us in. See you tomorrow, if we haven't been blown over!
P.S. About that little hitchhiker.....FOUR mousetraps set and not a single nibble in two days....Eldy, are you sure you haven't been drinking?
Posted by Jeannie and Eldy at 4:32 PM