A Needle in a Haystack?

Nope! These are geological granite rock formations in South Dakota that are EASY to find. They look so much like needles, that's where they get their name. At first, I thought the South Dakota landscape was a little on the boring side. Not when you get to the western side of the state! When we were kids, we did many, many physical geographic maps of the United States. I remember coloring green for flatlands/lowlands, beiges for plateaus, and brown for mountains. That coloring takes on a whole new meaning when you DRIVE the states.  As we traveled from east to west across South Dakota, the landscape was quite flat. When we arrived in Rapid City, there was a slight change in elevation. Then we saw gently rolling prairies, the grasses which have turned sandy brown. It almost looks like a desert landscape--dry and barren. The city limits are quite spread out....Within 23 miles of Rapid City, you hit the Badlands and the Black Hills. WOW! We took a highway called the Needles Highway (Hairpin curves and narrow granite tunnels for 14 miles on Highway 87) and here's what we saw that captured our camera:

The drive along this two lane highway almost made me carsick. There were so many hairpin curves it made me dizzy, one right after another! The igneous granite rock formations were a sight to see... There were many one lane tunnels that take you through the centers of the mountainous rock. We saw a "dueley" pickup truck (a pickup truck with four tires in the back and wider than normal) barely make it through the tunnel at one point. We thought he was going to get stuck! What was great was all the "turn outs" so you could stop and marvel at God's gift of nature to us and take photo after photo that is almost postcard perfect! Here are some more photos of the Needles--granite rock formations that have been weathered and eroded by wind and rain. The "Needle's Eye" is about 30 feet tall, and the slit is about 3 feet wide.....tomorrow we show you Custer State Park, the best "zoo" in South Dakota! 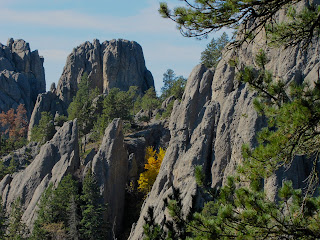 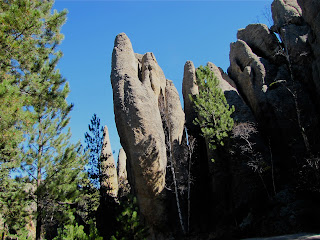 Posted by Jeannie and Eldy at 6:58 PM

Email ThisBlogThis!Share to TwitterShare to FacebookShare to Pinterest
Labels: the Needles in S. Dakota