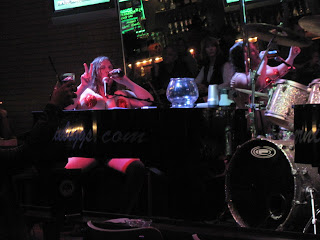 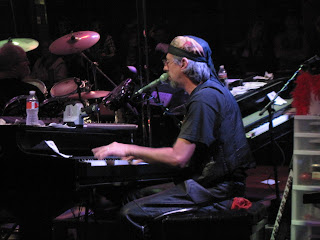 While we were downtown at the Landing yesterday, we saw that there was a dueling pianos show at Eddie Bigg's Restaurant. We decided to check that out last night. For a $5.00 cover charge, we saw some great entertainment! It was Halloween costume prize night, so the performers were dressed up in costumes as well as a variety of customers. With adults, you never know what they are going to come dressed as. Witness one of the piano players...he's dressed in a heavily padded fat lady suit with red pasties and thong...We saw the usual pirates, vampires, sailor ladies and nurses, and one guy who was very creative who came dressed as a breathalyzer machine. You can imagine where the part that you blow on to take the test was located! We didn't stay late enough to see who won. One of the piano players was superb! He had a gravelly voice, a great personality, and his piano playing really rocked! They also had a great drummer...Eldy requested "Wipe Out", a fabulous song for a drummer, and so we were treated to a great performance on that.

Thought I'd post some of the shows that were listed while we were here: 12 Irish Tenors, Acrobats of China, Brett Family Variety, Cat's Pajamas (A Capella), Clay Cooper, the Hughes Brothers, Jeerk (a percussion group from Sweden similar to STOMP), Jim Stafford, Joey Riley, Legend of Kung Fu, Mickey Gilley, Moe Bandy, Neal McCoy, Osmonds, Rankin Brothers Variety, Roy Rodgers Jr., Tony Orlando and the Lennon sisters, and that crazy comedic Russian guy, Yakov. That's just a few of them. Ticket prices average around $35.00 a person, but there are discounted tickets available. Some of the other attractions in Branson are what looks to be a very cool Titanic Museum, the Stonehill Winery, a butterfly palace, (always a favorite of mine) and the Branson Scenic Railway--a two hour railway tour on refurbished, stainless steel passenger coaches and Vista Dome railcars for a panoramic guided tour. We did find information about the Dogwood Nature Park in the area--a 2200 acre park that offers hiking and biking and other activities, but the activities are all fee based. If you want to ride your own bikes in the park, it's $8.95 per day per person. We did check out Dick's Oldtime 5 and 10 store downtown (historic old Branson). It was a jam packed fun store of over 50,000 items full of collectibles, merchandise, old time candy, toys, antiques, gifts, and other stuff. The store is over 50 years old and still going strong. They don't order anything on the computer or use computers in their business, it's all catalogued and ordered the old fashioned way.

It looks more than likely we are going to head out tomorrow for another destination....it's a surprise to me and Eldy, we don't know where we are going yet! We're kicking ideas around today... we'll see what happens tomorrow!
Posted by Jeannie and Eldy at 3:24 PM

Email ThisBlogThis!Share to TwitterShare to FacebookShare to Pinterest
Labels: Dick's 5 and 10 store