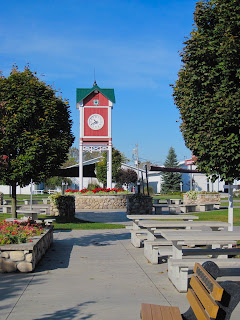 It was all we hoped it would be (sounds like the Mamas and Papas song (from the 70's?)...just a quiet Monday...I rode my bike around the fairgrounds. You can ride quite a bit if you go all around the paths and streets around the fairgrounds--about a three mile ride. It's a ghost town of a fairgrounds right now. Very different seeing all the fairgrounds with nobody here but a few RVers and campers.  The horse barns still emit the smell of horse manure, and the horseshoe marks are still visible leading out to the track. I stopped for a moment to take in the beautiful day and I could almost smell the popcorn, caramel corn, elephant ears, cow manure, pigs, Nelson's Golden Glow chicken, and the porkchops (the best ones are at the Elkhart County 4H fair). It all smells good when you are at the fair. For anyone not familiar with Nelson's Golden Glow Chicken, it's a special recipe cooked and smoked over a grill fire and it's legendary in Indiana! Guess they had some awesome entertainment this past summer at the Elkhart 4-H Fair--Lady Antebellum, Huey Lewis and the News, Lonestar, and the Guess Who--all in one week! Wow! We'll have to try and be in the area next year for the fair. 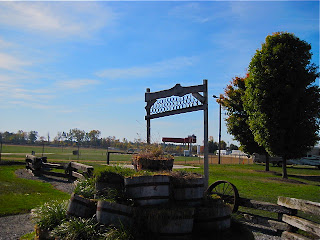 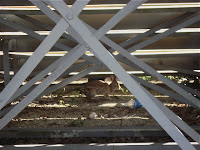 After taking in the sights all around the campground, and finding only a skittish little bunny rabbit in the ghostly grandstands, I headed back for the day's activities--running errands, and making calls to get more repairs taken care of locally here in Elkhart. The Diamond Shield guy came out today and repaired our protective coating. It looks like extremely heavy duty Saran Wrap when they take it off. When it's on, you can't even tell it's there. He did a very nice install job. Next on the list is the Pumpkin Patch bike trail. Eldo went biking today with me in Goshen on this trail today..Yay!....It was a beautiful five mile ride one way. The trees were ablaze with color, you couldn't ask for more beautiful weather. Tuesday, I head for Angola, IN to pick up my mail, stop by my old school to see some school friends, then run some errands in Angola. Eldo will hold down the fort at the fairgrounds till I get back....until then.... thanks for reading!
Posted by Jeannie and Eldy at 7:44 PM