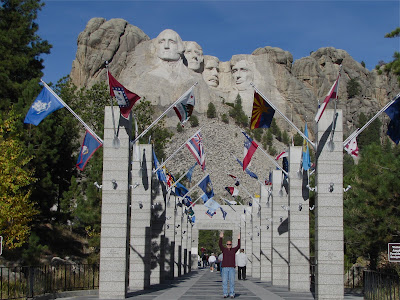 We did it all today...The Mount Rushmore Memorial, Custer National Park, and the Needles Highway drive...but we'll tell you about just Mount Rushmore today....what an amazing testimony to our country of one man's spirit and vision--and the support he garnered to complete this awesome granite set of statues of our presidents. I always wondered how these particular four presidents were chosen and how the statues were completed. The four presidents are George Washington, Thomas Jefferson, Theodore Roosevelt, and Abraham Lincoln. We learned all of this by touring the monument's museum which was really well done and beautifully designed. Did you know that 90% of the granite (450,000 tons of it!) was removed to form the four presidents and the rest carved and chiseled out? Sculptor Gutzon Borglum was the artist behind the carvings of Mount Rushmore. It took almost 400 workers from 1927 to 1941 to complete Mount Rushmore. The most skilled workers, the men who placed the dynamite charges, got so skilled at placing the blast charges, they could get within four inches of where they needed to be on the eyebrows, lips, nose, cheeks and neck.
Borglum created a model in the studio on a basis of 1:12 inch scale. Measurements were carefully taken on the studio model, then transferred by way of a giant plumb bob and giant protractor type apparatus/"pointing machine on the mountain. Drillers would drill closely spaced holes on the mountain head figures, then chisel out the in-between spaces, then"bumping away" the holes and lines with pneumatic drills. The final surface ended up being as smooth as a concrete sidewalk! Each president's head is as tall as a 6 story building. The presidents' noses are 20 ft. long, their mouths are 18 feet wide, and the eyes are 11 feet across. What's really cool is to see the details up close in the studio...like the pupils are shallow depressions with narrow shafts of granite 20" long polished on the end to make the eyes look like they sparkle.

The monument is lighted every night at dusk for two hours. We did not visit it at night, but it truly would be a moving sight to see. As it was, it was very awe inspiring to see during the day. South Dakota has some amazing geological features, once you get past the grasslands and rolling plains. We'll show you some of those tomorrow. We'll be here another day to explore some of the other cities--Deadwood and Sturgis, S.D perhaps. See you then!

Posted by Jeannie and Eldy at 3:31 PM