Wanna see some ducks today? That's all Sparky did, take a bike ride--12 miles total, trying to find something interesting to photograph... Back to Eagle Lakes Community Park to see what birds were out and about today....the ibis on the way to the park...not sure what this dark one is, might he be an ibis also? 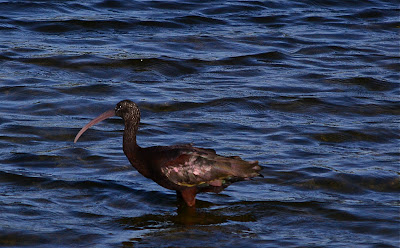 And how about these ibis? They look like they are admiring themselves in their reflections!
Then I got to the park....and there were LOTS more ibis....with lots more reflections to look at and grub to eat! 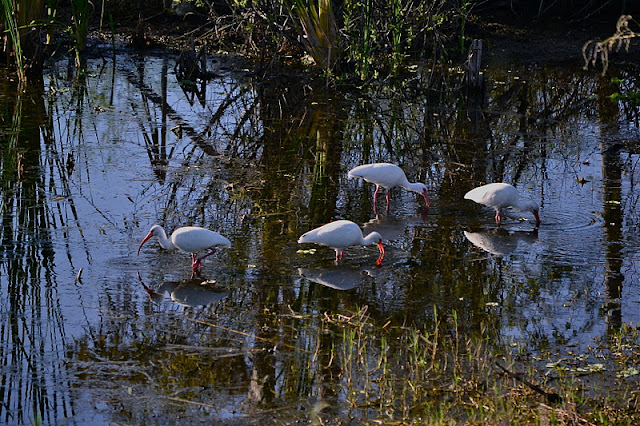 Back to Sugden Park on the way home....and more birds waiting for two elderly gentlemen to feed them...tch! tch! Guess the ranger has warned the old coots (haha...Sparky took REAL coot pictures...keep reading!) NOT to feed the ducks, but are they listening! NOPE ! They are still feeding the ducks almost daily, despite the threat that if they get caught one more time, they will be banned from the park! And you thought teenagers don't respect authority! Hm-m-m-m, bet they are familiar with the expression "crazy as a coot"!

Here's a muscovy duck...Native to Mexico and Central and South America, they've made it here to the states along with lots of other "foreigners"....They are here in Sugden Park....Look at those beautiful feathers! 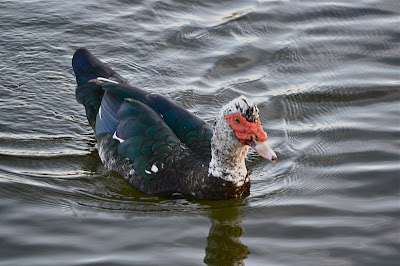 The old farts made it easy to get some more bird photos...no wonder the ibis were sitting on the dock the other day, they were waiting for their buddies to show up and feed 'em!
And my LAST ducky photo for the day....Not sure what kind this one is, but it's pretty! 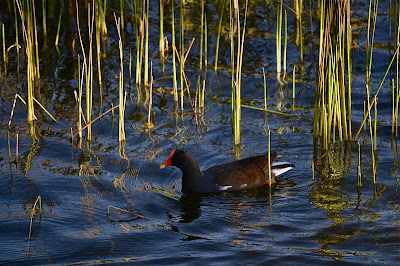 It was just a "ducky" day here in Naples, Florida!
Posted by Jeannie and Eldy at 11:50 PM

Email ThisBlogThis!Share to TwitterShare to FacebookShare to Pinterest
Labels: muscovy ducks and more