A Tale of Three Dolphins

We were exploring the Everglades City area and decided on the spur of the moment to take the Everglades National Park's Ten Thousand Islands boat tour. Sparky got sucked into the brochure hype of seeing dolphins playing in the wake of the boat! They take you out on a catamaran for an hour and a half, and if you are lucky, you will see dolphins, lots of birds and maybe roseate spoonbills! The lady at the ticket office said that the dolphins had been especially active the last two days...Sparky was SOLD! Twenty-six dollars and fifty cents a piece, was it worth it? 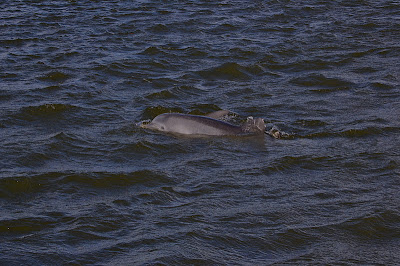 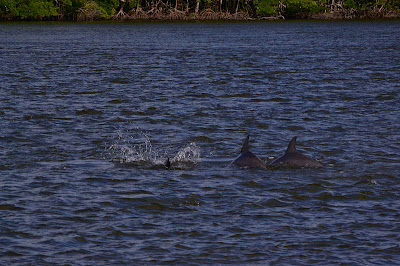 Wel-l-l-l-l....yes and no, depending on what you expect to see. Nature is not always cooperative as far as letting you see wildlife. Did we see dolphins? YES!  Three or four of them came up to the boat, swam under it, teased us with a little tail action, then quickly swam away...Were they especially active, like did they swim in the boat's wake? No.  Did we see roseate spoonbills? Nope... too early in the season....

Did we see some other unusual birds? Yes! We saw some royal terns...and a passel of pelicans.
By the way, the boat captain says 1) pelicans do not like people and 2) they do not like boats! They are deciding whether to wait us out or take off. They waited! Pelicans with brown heads are the youngsters, white heads are the mature ones, just like people. No young pelicans appear to be here, it's all old folks! (The maturity factor for people is debatable, take Sparky, for example). Ah, yes, that's a story for another day...Sparky can be quite immature at times! As far as acting like a kid, don'tcha ya know! 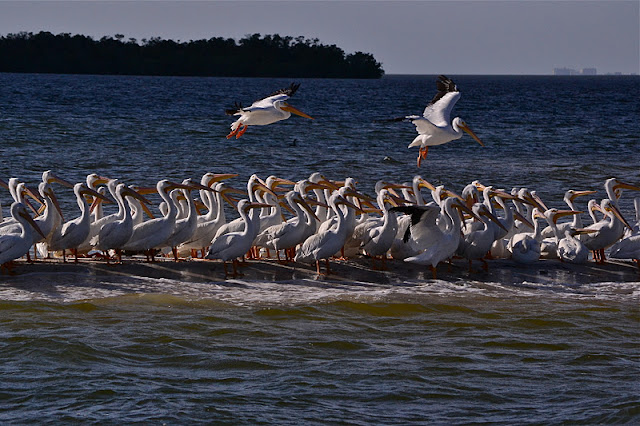 We learned some interesting things from the boat captain about mangroves and dolphins' mating habits. We found out that it  takes two males to "herd" a female away from her pod and that the males use each other to restrain her while one does his thing. You learn the darndest things on these tours! There is no mating season for dolphins, they mate whenever they feel like it! Did you know that dolphins are second on the list of intelligent species? Man is first, dolphins second, and primates third. Elephants are #4, this is according to the ship's captain. Whaddya know!? 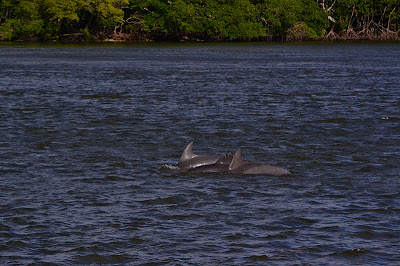 Was it a wonderful day to be out on the water? You bet! We thought this was a great way to get out and see nature for the day...especially since we don't have a boat or kayaks.....We highly recommend the boat tour in the Everglades 10,000 Islands.
Posted by Jeannie and Eldy at 11:45 PM