Eldy dropped his phone on the pavement in the parking lot yesterday...uh-oh! Even though it had a case on it, it hit the pavement just so, and something jutting up from the pavement hit the phone's front glass and shattered it. I should have taken a photo of it, but he was so upset, I didn't. There are sometimes where you just shouldn't document your ENTIRE life every day with photos, ya know? The bad thing about an iphone 4S is that the glass is integrated into the phone, you shatter the glass and you breakdaphone! A new iphone 4S outside of your plan renewal costs about 600.00! Yikes! No way was he going to purchase a new phone...He was just sick about it. BUT---

After doing his thorough investigative work online, he decided to go to the Apple Store in Naples today, the DAY AFTER CHRISTMAS, THE most crowded day of the year other than Black Friday, to see what could be done. The phone still worked, you just couldn't see the buttons very well, nor could you see photos very well, etc. The finger swipe functions still worked, too. Of course, we didn't have Apple Care program, because at the time of the purchase of the phone, Apple Care doesn't protect you in case of dropping it, it only protected the user from internal malfunctioning of the phone parts. He figured the phone warranty that came with the phone ought to take care of any problems that might crop up. Eldy was BRAVE to venture out to the stores the day after Christmas. Sparky encouraged him to go because SHE HAD A PLAN. She was going to help cover the cost of the new phone as a belated Christmas present! HA! Told you I would get him back for buying me something for Christmas and it isn't even January yet!

We-l-l-l-l, unfortunately, a new phone was the only way they would be able to help him....200.00, normally about 600.00 for an iphone 4S outside your plan....arrrrrgggghhhh! The old phone was only 3 months old! BUT--he decided to go ahead and replace the phone, AND get the new, IMPROVED Apple Care program which now covers dropping and breakage, up to TWO times during the warranty coverage. You drop into the ocean, it quits working, you're covered! And you only have to pay 49.00 for a replacement iphone. (I'm going to remember that when my phone plan is up and I switch to an iphone! In two years....says Sparky). He got a price break on the replacement warranty policy and now is covered should Sparky Butterfingers accidentally drop his phone taking photos with it...Which she does all the time now, take photos that is, because it's got such a great camera in the phone, much better than her Motorola Atrix phone. 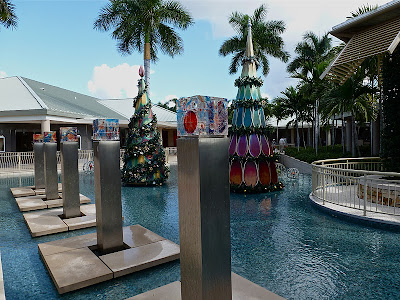 The mall where the Apple store is located is a beautiful mall called Waterside Shops. There are all kinds of classy stores there besides the Apple store, and it's a great place to sit and people watch, there are lots of benches. There were all kinds of people there today---like this gal who I guess was a runner. She was an older gal who had absolutely no qualms about showing up at the extremely crowded mall dressed like this and having everyone look at her--It was funny to see the guys' eyes pop out of their heads as they came out the store and went by her. I say if you've got it, flaunt it! And she did! 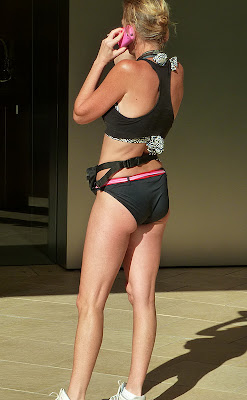 Here's the Apple Store today...It was CRAZY!!!!!!!!! But we only had to wait an hour past our appointment time (!) and now Eldy has a brand new iphone 4S once again...and he can talk to Siri again, and do all kinds of cool things with his phone. He's a happy camper! 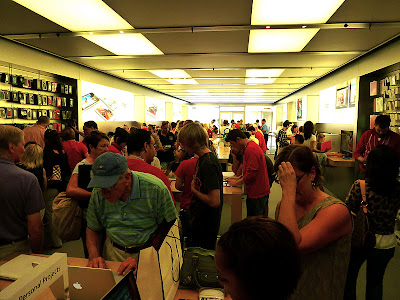