Eldy was a stinker! Not only did he go out and buy me a new point and shoot camera so I could take it to the beach and not have to worry quite so much about sand and salt, but he wanted me to be able to take the camera and go kayaking Christmas Day for the third straight year in a row! What a sweetie! Except I didn't buy him anything, BECAUSE WE WEREN'T SUPPOSED TO EXCHANGE PRESENTS! I'll get him back. There will be an influx of mail for him the next coming month. (You better not! he weakly protests.)

We headed out to the Isle of Capri...a small, out of the way beachy town surrounded by water and some great places to kayak. The rental place is from the Isle of Capri Fish Restaurant. Rental was 30.00 for three hours, plenty of time for me to get some exercise. I always worry just a tad about getting lost, especially when there are lots of inlet and mangrove tunnels. (And you know who ELSE is nervous about her getting lost! She can't even find her way around town with a road map and a GPS!) True, true...sad, but true....Apparently, my questions were numerous enough that the owner of the rentals gave me his very own copy of the islands map so I wouldn't get lost and he pointed out where to go on a much bigger map. I didn't want to tell anybody that even with a map of the islands, I could still get lost! (You don't have to tell ME! E. exclaims.) Heck, I didn't even know what direction I was paddling let alone where I was on the map, but I could have figured it out with the position of the sun I'm sure. I just kept the big tall buildings in sight for most of the time I was out on the water and still managed to get into trouble! But I didn't get lost! 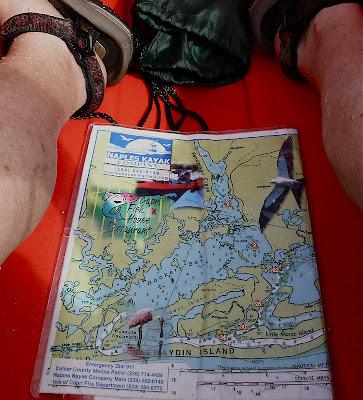 So off I went...looking for dolphins, manatees, alligators, snakes (not really) and birds.

What he DIDN'T tell me what who has the right of way in channels, what side of the marker I'm supposed to stay on, little stuff like that...That figures importantly in the chain of events that are about to follow......I started out in the little inlets of mangroves that circled around and came out in the gulf, but after seeing the mangrove tunneled waterways closing in rapidly and envisioning snakes wrapped around mangrove branches, I headed back out to the shoreline where I could see the high rises and landmarks better. I saw the usual egrets and herons and osprey nests... 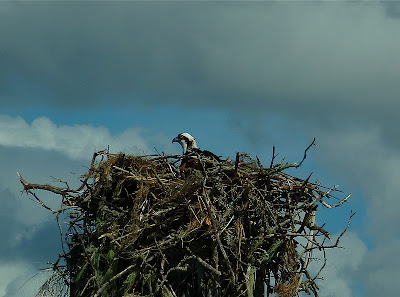 I was following the shoreline when I saw FINS! As in MULTIPLE FINS!   DOLPHINS! And I made a beeline for the center of the channel focused only on the fins and nothing else. I was going to GET SOME DOLPHIN PHOTOS COME HELL OR HIGH WATER! I get to the middle of the channel and my phone rings. It's my oldest daughter calling to wish me a Merry Christmas! I answer, because 1) I'm excited to tell her about the dolphins, a pair that just dove in front of my bow (no photo, my hands are full!)  2) I'm talking to her in the middle of the channel in the kayak and isn't technology wonderful to be able to do that! and I answer because 3) we have a hard time getting a hold of each other....so I'm prattling on about the dolphins, she's expressing the appropriate amount of amazement that I'm talking to her out in the water in the channel in my boat and that I saw dolphins up close and personal when I happen to look up and all of a sudden, THERE ARE TWO BIG YACHTS SIDE BY SIDE BARRELING DOWN THE MIDDLE OF THE CHANNEL WHERE I AM SITTING LIKE A DEAD DUCK IN THE WATER! They appeared NOT to see me...They were coming FAST, DIRECTLY AT ME!!!!!!!  They didn't slow down one bit!!!!  SH**T!!!!!!

I yelled and the sentences expressed in the rapid style of those commercials where they cram a bazillion words into just a few seconds, "GOTTA GO, TWO BIG BOATS HEADED STRAIGHT FOR ME!!" I dropped the phone in the bottom of the boat, and paddled like HELL to get to the left of both of them, whipped the nose of the kayak around to face the humongous waves that were being generated by their wake. THEY WAVED "HI!"You gotta be kidding me! So I waved back--with my middle index finger!!!!! (YOU DIDN'T!!!!????) No, I didn't...BUT I THOUGHT ABOUT IT!  Geez, there's a 30 m.p.h. speed limit zone through there...I swear they must have been going about 50. Although Eldy says 30 m.p.h. in a boat IS fast.....I swear my heart stopped and I honestly thought I was going to be sliced in half by one yacht or the other! I hightailed it over across the channel to a small beach right across the way as fast as my puny arms could muster a paddle to safety....Made it to the beach and called my daughter right back to let her know I was ok.....Whew!!!! I have to admit, THAT was SCARY! And I just got done talking to my best friend, Jeannie W. today, and she asked me was it dangerous to go out by myself, and I just laughed...."Heck no, I'm fine out there."  HA!

The beach I stopped at to catch my breath and relax after my harrowing experience was a small shelling beach---lovely! 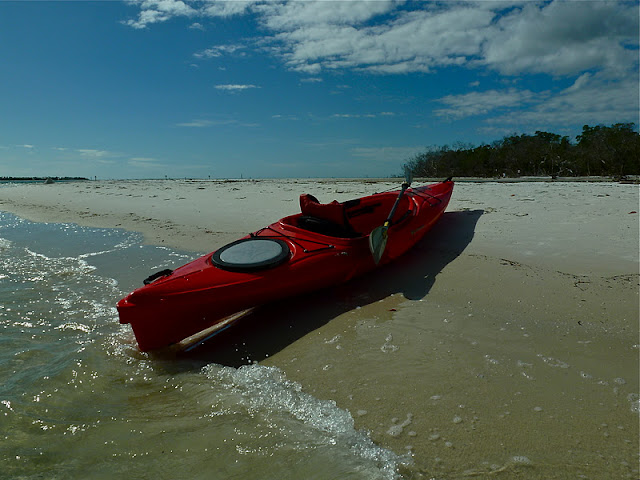 But hey, I DID see dolphins! Besides the the two that dove in front of my boat, I saw about five or six more of them within a half hour time period right before the ships almost ran me over, then the dolphins disappeared for the rest of the time I was paddling around in the channel--BY THE SHORELINE. They're not stupid!  I did ask when I got back if I was in the wrong place at the wrong time and they told me no, the big boat owners are supposed to watch out for the little guys, and that I had the right to be in the channel...TELL THEM THAT!....It was an interesting day! And the start of a GREAT Christmas Day tradition!  Thank you, Eldy, for giving me such a wonderful gift! 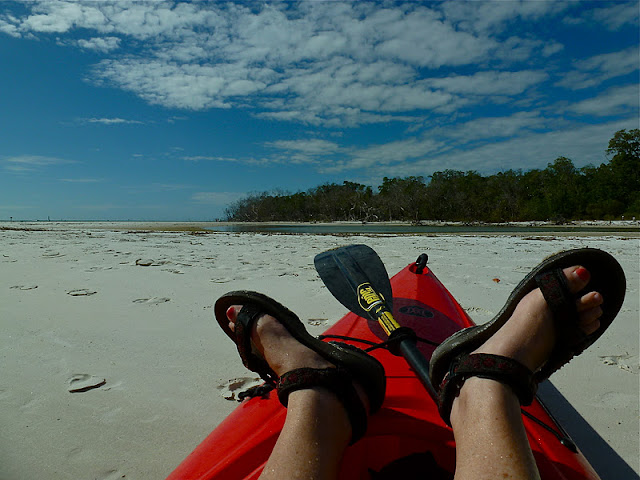 I think it's gonna be a quiet last week for us here in Naples....That was enough excitement to last awhile.....
Posted by Jeannie and Eldy at 11:50 PM