The beach at Naples is beautiful...white sands....lots of shells to hunt for...We headed down there today a little ways away from the pier where lots of people go to fish. By the way, fishing is free on the pier, you don't need a license to throw a hook out, courtesy of the city of Naples. The entire city is a bird sanctuary, so they have signs not to feed the pelicans, to dispose of your fishing lines responsibly. As we walked along the beach a bit, scouting out a spot to come and spend a good part of the day in the next day or two, I said to Eldy, "Gee, I'd really like to see some dolphins. I wonder where a good viewing point would be for that? Marco Island?" He says, "Oh, I don't know, maybe." And then he shouts out, "Look, over there! I see some!"

And wouldn't you know, we didn't have our camera this morning. We had biked down to the pier and the public beach sites further down the street, and Sparky wasn't planning on seeing anything, just getting a bike ride in. Besides, storm clouds were rolling in and out, threatening rain all day. So she didn't have her camera. Phooey! Eldy's camera phone was too hard to work to try and catch them. 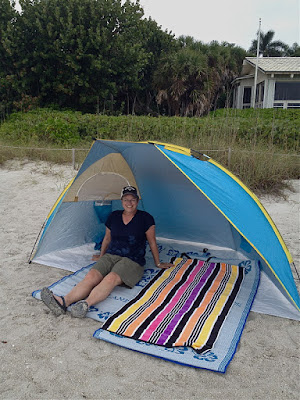 We saw LOTS of dolphins! They were "ripping" through the waves, chasing fish and feeding close to shore. I mean, REALLY close to shore...We saw half a dozen, at least! And then, we both saw a dolphin jump clean out of the water, totally in the air. SPLASH! Back down he came. It was spectacular! We watched as they surfed the waves, chased fish, and went down the gulf towards the pier.    Guess that's the place for dolphin watching, right there at the Naples public beaches  and we're going back more prepared---WITH a camera, WITH a little cabana shelter so Sparky doesn't get burnt, and WITH our beach chairs, and a picnic basket. On the way back from the beach, heading out on our bikes, we saw this guy with a bigger than life Rudolph sitting in the front seat with him. Rudolph rotated around looking back and forth at anybody and everybody who was gawking at him. It was too funny!

As he drove off, we noticed he had Indiana plates on his car. Darn! We would have struck up a conversation with a fellow Hoosier, had we known! 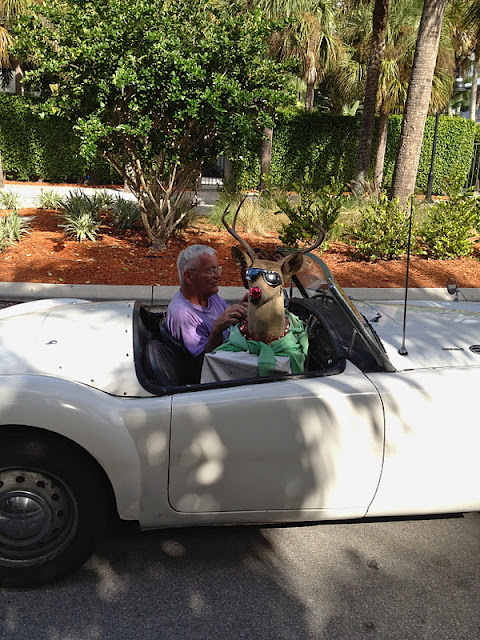 We went back to the beach this afternoon to test out our little cabana shelter today, but didn't stay long at because of the rain coming and going. Eldy went into the water, as he had his bathing suit. The water temperature was 70 degrees! Warm! Of course, when a wave catches you by surprise, it's a little shocking! 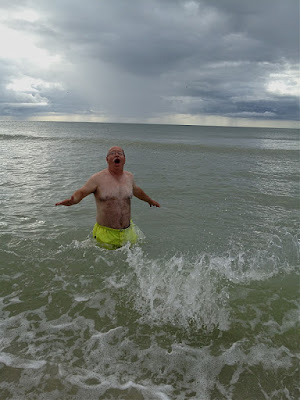 No dolphins this afternoon but we're heading back tomorrow...it's supposed to be a nicer day. Maybe we'll see some more! If not, there are always the interesting shore birds to watch.... 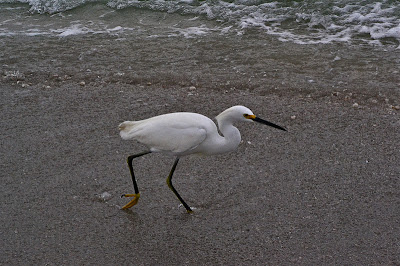 Email ThisBlogThis!Share to TwitterShare to FacebookShare to Pinterest
Labels: dolphins at Naples Beach