We've heard that the interstate highway 75 is "Alligator Alley" but we can't vouch for that. What we can vouch for is the stretch of highway 41 heading east towards the Everglades. After leaving Naples and driving east, about 20 miles out, start looking to your left at the Everglades canals and waterways and you'll start seeing them. 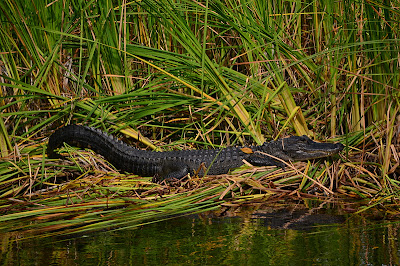 Last year about this time, we saw one right after another. This year, because the water is so high from all the rain they've had earlier this fall, the banks are not there for the alligators to sun themselves. We had to drive much farther east to start seeing them. And see them, we did! 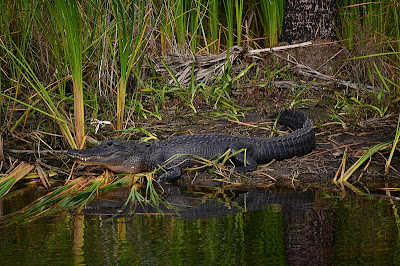 One of our favorite spots to stop and learn some new things is the H.P. Williams boardwalk/park. There's usually a naturalist or two there and we always learn some new things we didn't know before...Did you know the ibis has a nickname--"Chokoloskee chicken"?  They move their heads like chickens when they feed...Chokoloskee is a town/island in Florida. How the two go together, I'm not sure, but the Calusa Indians and locals use to eat ibis as a source of food.  And drum roll, please!....They taste like....CHICKEN!

Did you know alligators never sleep?  They have a highly efficient thermal regulating system that shuts down their organs when it's cool, they go into a sort of coma state...BUT THEY'RE AWAKE. Did you know they don't eat humans unless they perceive them as food? Well, DUH, Sparky! What is meant by that is, if some dumb tourist (and it AIN'T Sparky!) throws some food to them and nothing happens, it's the next person who comes along who might be in trouble. If the alligator views THEM as a food source--they might come after you. The naturalist said they can run VERY fast for only a couple of seconds...BUT at speeds up to 30 m.p.h.! But most of the time, they are very docile. Are you SURE, guys? This one doesn't look like it, although he does look like he's smiling! 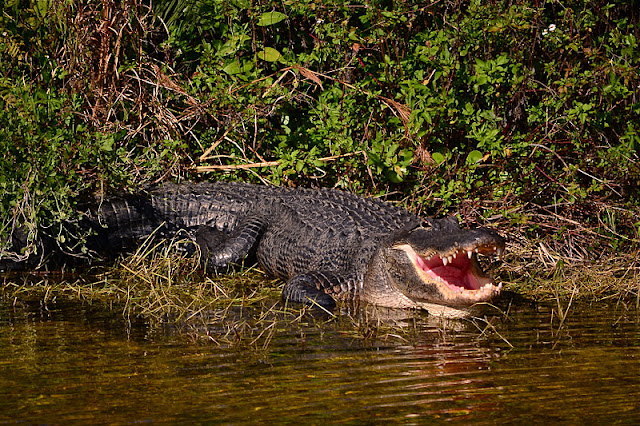 Next, we stopped off at the Big Cypress Information Center....it's got a nice boardwalk where you can see manatees, alligators sometimes, and various birds...the manatees are just starting to come in from the gulf waters. As the gulf cools down, the manatees moved inland....There were three, one of them a baby, but we just saw one...There's somewhere in Florida where you can swim with the manatees, I'd love to do that! It's probably not an ecologically sound idea, but it still sounds cool! 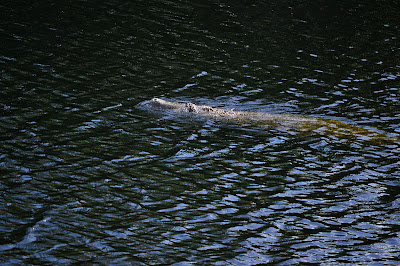 Wanna see some BIG alligators? Head to the Oasis Welcome Center....there are always big gators in the canals right outside the boardwalk at the visitor center...Here are some BIG BAD boys.....The one laying his head on the other just cracks me up with his expression! Sort of like, "Duh, what's up, people?" 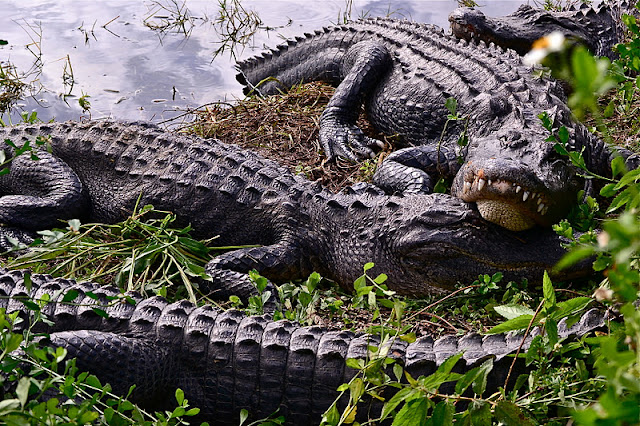 Then we saw something else really cool at the Oasis boardwalk...a female anhinga (brown heads/necks are females, black heads are males) was swimming underwater at our feet under the boardwalk..Up she pops out onto a branch with a fish! And we watched her flip the fish several times until she got the head first into her mouth, then she swallowed it whole! That's how they eat fish--gotta have the head first go down. 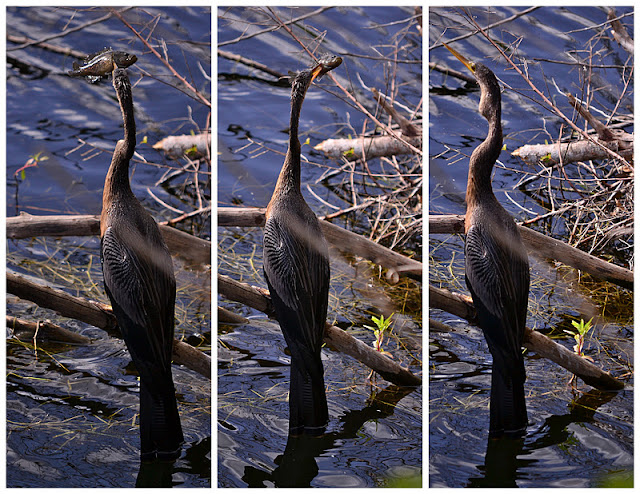 After her tasty meal, she spread her wings to dry.....anhingas don't have oil in their feathers for buoyancy like ducks do...so they have to "hang out" to dry..... 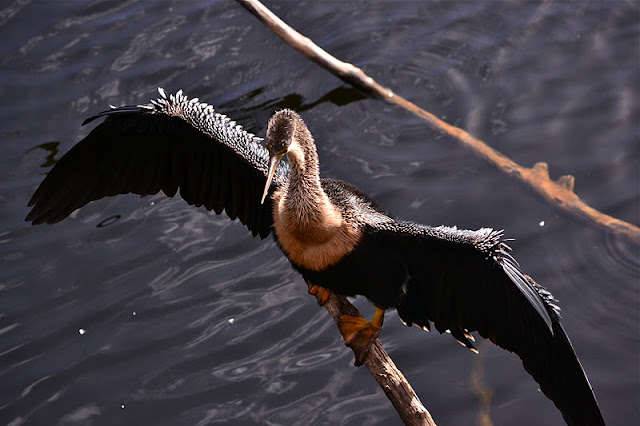 On the way home, we saw some wood storks...I think they are endangered....but there seemed to be quite a few in the waterways and marshy swamps along that same highway 41...I'm so glad I got to see them and they didn't fly away as I approached! 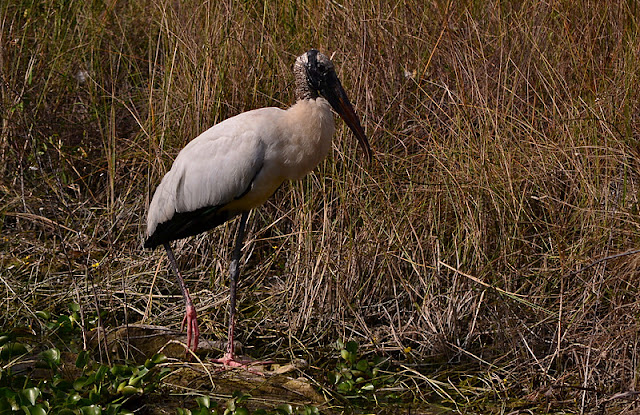 It was quite a spectacular nature show today.......You can't beat the Everglades for some wonderful viewing experiences!
Posted by Jeannie and Eldy at 11:00 PM