Getting a Haircut Can Be Scary

Sparky needed a haircut...so.....So she went looking for recommendations in the park...Lady at the park office is new, not able to recommend anybody..... she's still getting to know the town. Talked to a couple of people in the park, one, one of them a very elderly gentleman. First mistake, a guy might not know the best place for a woman to get a haircut....He said his wife had gotten a haircut at ________ and really liked the place. Well, that was good enough for me....off we went to the salon that shall remain nameless.....Second mistake--Sparky did not peruse the salon as to the beauticians working there. They were all senior citizens! But she did not notice that at the time. She breezed right in to make an appointment, focusing only on the 40+ something energetic lady working the front desk and there was one appointment available in 45 minutes. Great! She did notice that every single person waiting to get a haircut was a little white haired old lady, at least four of them sitting in the waiting room chairs--that was her third mistake...BUT, Sparky thought there might have been a senior discount today, so she didn't think too much of it. (Hey, now, Sparky--you ARE a senior citizen in a lot of instances!) Yep, but I'm not 65-- YET! These ladies in waiting were every bit of 75+....

Back home to relax at the patio, read the local newspaper to catch all the latest happenings, back to the salon a short while later.....As Sparky sat waiting for her turn, she started to notice that there was NOBODY in the salon under the age of 60--no beauticians that appeared any younger, no young customers waiting, and she started to feel a little nervous about getting a current stylish short haircut. Finally, it was her turn....Out totters a very elderly lady, she's the beautician!..."Ma-am? I'm ready for you...." Uh-h-h-h....OK...we'll give this a try.....She pulled out her supplies for a razor cut, with VERY SHAKY HANDS...Uh-oh! This is NOT good....She's going to razor cut my hair with a mild palsy? Now Sparky was REALLY nervous!

She says, "So...you want a PIXIE cut?"  PIXIE cut? When was the last time you heard a hair style referred to as a "pixie" cut?  I think it was back in the fifties and sixties! " Uh, yes, that would be fine..."
Half an hour later, I had no bangs left, and a bad case of nerves, but it was a haircut that would suffice. As Eldy says,"I'll just say what you always say to me when you cut MY hair--Don't worry, it will grow out!"  Sigh! Thought I'd try a black and white photo today--heck, it's all gray anyway!....Here's me with the too short haircut! 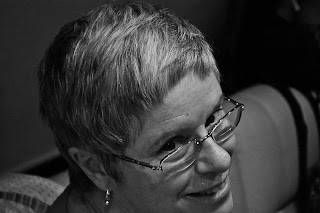 Not much else happened today...Eldy washed the bugs off the coach, we went to Walmart looking for some Christmas decorations, and we decided to try the happy hour specials at the Jolly Cricket in downtown Naples on 5th Avenue-- a beautiful restaurant with a British pub feel. We split a filet mignon pair of sliders with Stilton blue cheese and carmelized onions and french fries--delicious! And then, we just had to have pumpkin cake with cream cheese frosting. The presentation was beautiful, didn't quite capture it clearly with the camera phone, but you get the idea. We'll definitely go back for happy hour specials!

Tomorrow we'll be decorating our home on wheels and our site to look like Christmas is coming! Not many in the park have decorated, it's early yet. There are quite a few empty spaces here at the park. I'm sure it will get fuller as time goes on.....We'll see you tomorrow at our site.....Eldy's wondering when Sparky is gonna want to go alligator hunting...Soon, dear! Soon!