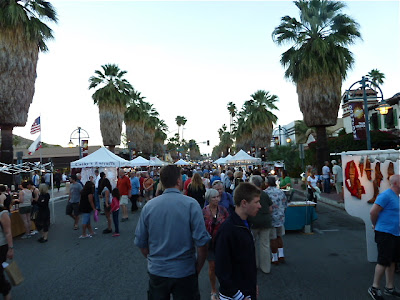 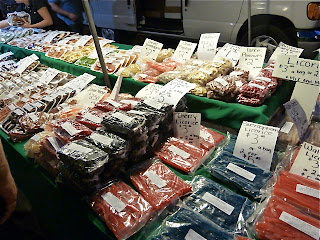 Every Thursday night from 6:00 to 10:00 PM October through May, they close off a section of downtown Palm Springs (Palm Canyon Drive) for VillageFest, one of southern California's most popular and longest running weekly events. The location is at the very base of the San Jacinto Mountains. This is a festival filled with music, flowers, original artwork, jewelry, crafts, horses (!) (they were there to raise money for an equine rescue mission) and my favorite, FOOD! Think all kinds of Mexican foods, middle Eastern foods, the usual BBQ, kabobs,  and junk stuff---chocolate covered bananas and some other ridiculously fattening ice cream treats---YUM! 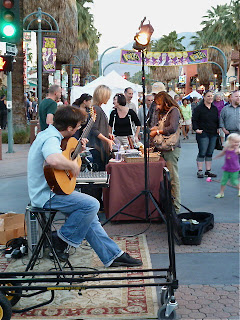 You can walk along the vendor rows or check out the many wonderful restaurants and shops along the several city blocks on each side of the festival. They had produce there, too, and with Indio nearby being the date capital of the world, there were rows and rows of dates, raisins, plums and other fruits for purchase, too. We bought a pound of the freshest, plumpest, juiciest rains you could possibly imagine, and the taste of those fresh raisins, WOW! The vendor told me at least three times to take them home and FREEZE them or they will start fermenting if I leave them out! Got it, lady, I will freeze them. How nice it is to be able to buy a food item that isn't shot through with preservatives! While I'm on a food kick here, they had California strawberries that were so sweet, they were like candy! Picked fresh TODAY! 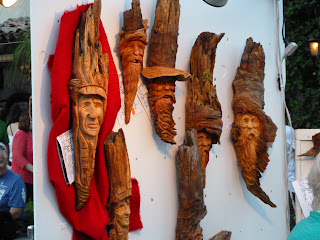 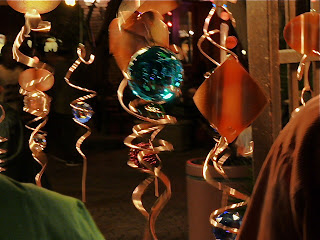 The crafts here were really great and so was the entertainment...street musicians, a fantastic saxophone player named Norm Douglas, a young man with a terrific voice trying to raise money to get through college, and other fund raising groups and individuals....there was a severely burned young man with barely a face who had the courage to be out there with his guide dog, he had written a book about his struggle for survival. I wish more people would have stopped and donated for him. 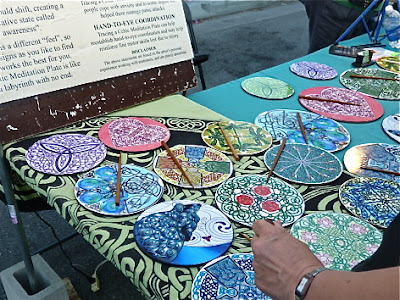 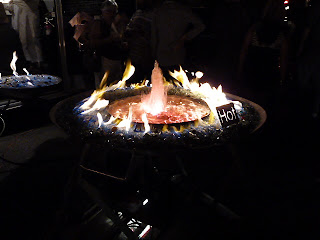 Cool craft things----wind chimes, dangles, decorative wood carvings, purses, little girl "girly" stuff, cool flaming fire pits and an interesting booth where the vendors claimed by tracing a Celtic design which is very maze like, you will calm yourself into a meditative, focused state of mind. That claim made me think about my ADD kids that I use to have in school, that might have been something that would have helped them concentrate their focus more,  a task to shift their focus into learning. I was always looking for things to help those kids pay attention, short of getting up on a desk and dancing! I tried classical music, stress balls, you name it! By the way, classical music often really helped.....

We really enjoyed this festival and ended up getting a terrific pizza for dinner at a restaurant along the street--delicious! Saxophone music on the street while dining outside at an outdoor cafe/restaurant---it doesn't get any better than that! Unfortunately, remember those horses I just told you about? They were standing on the street right next to our table and chose to do their business right while we were eating! EW-W-W-W-W! Fortunately, they cleaned up the mess right away and then moved them away from the restaurant. Whew!  See you in Aguanga, CA tomorrow!
Posted by Jeannie and Eldy at 11:45 PM