This morning we gradually started getting things together to get ready to leave tomorrow morning. I worked on the car AGAIN, cleaning it out and trying to get rid of a few things. It seems we keep throwing stuff in the car when we buy something, knowing we can at least put it in the car if we can't find a place in the motorhome for it. We have to be careful to keep a clear path to the back window so we can see out of the car when we drive it!

Yesterday we bought a new Thule bike rack for the car, as the Saris one had been severely cracked by somebody backing into it in a parking lot. The Saris rack stuck out quite a bit behind the car and the style did not allow you to compress it closer to the car. (It was the "Thelma" two bike model.) We now have a Thule "Helium" three bike rack with a LIFETIME warranty. Third time's the charm, hopefully, it's our last bike rack! Not only did we buy the bike rack yesterday, but Eldo bought himself a pickleball racket and some balls! All right! Now we can go "dink" around on any pickleball court. "Dinking" is when you stand at the first inside border line on a pickleball court--the area called "the kitchen" and just gently hit the ball back and forth in the kitchen area. That's a little warmup pickleball players do when they first get out on the court. You practice placing the ball in different parts of your opponent's court before you start the actual game.

My yarn supplies are starting to take over the cubby space in the RV, so I'm gonna have to curtail the yarn stash. (Woo-hoo! says E.) I always feel like when we get ready to move, we aren't going to be near a big enough city with a Michaels or a Hobby Lobby, or a good grocery store, so I get in the "stock up" mode just in case we boondock...which we've only done a few times in the past ten months that we have been full timing, and it's only been for a night. We have a residential fridge, but are not sure how long we could run the fridge on the house batteries before running them down and then needing to use the generator to recharge the batteries. But we need to experiment with that and try it out and see! That's what the generator is for! And besides, you are supposed to run your generator once in awhile to keep it in efficient condition. 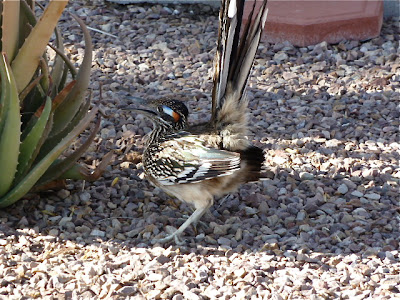 Tomorrow, we head for Aguanga, California.....I think it's fitting that on our last day in the park, we saw TWO roadrunners today...they were chasing each other around a desert plant here in the park...and they look like they are playing peekaboo with each other! They mate around this time of year into early summer, and the male shows off his tail feathers to the female...Hm-m-m-m...maybe there was some courting going on today. (You can see the second roadrunner in the third photo behind the cactus)...Roadrunners are interesting birds....they mate for life, the male helps incubate the eggs, they raise the young together, they like to hang out in pairs, and they eat snakes and scorpions, among other things.....I think I really like these guys!  See you on the road again......
Posted by Jeannie and Eldy at 11:45 PM

Email ThisBlogThis!Share to TwitterShare to FacebookShare to Pinterest
Labels: roadrunners at Palm Creek