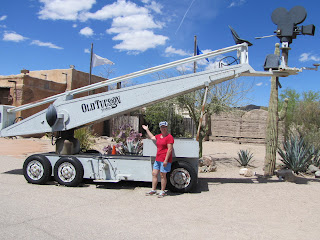 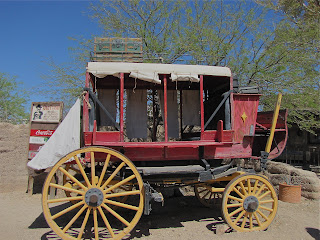 Another little road trip today...to Old Tucson studios, (on S. Kinney Rd. in Tucson) the movie/props location for many, many western movies.....yes, it's a tourist attraction, but it was reasonably priced, many things were free, and you got to see where Little House on the Prairie, Bonanza, High Chaparral and many, many other TV and feature movies were filmed.

You can take a stagecoach ride, visit the museum with lots of artifacts from movies, and experience a lot more things at the studios...check out the most photographed locomotive in movie history, "The Reno", which has been in more than 100 movies. 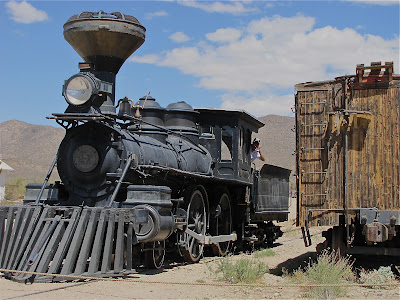 We sat down on some hay bales for the first show outdoors, to see an enactment of how the pioneer day hustlers and hucksters worked on swindling people out of their money. Before we knew it, a comedy team of two guys grabbed me, Sparky, as an unsuspecting, slightly unwilling bystander, to demonstrate the powers of Sir William Wiley, Esq.'s elixir (which happened to be sasparilla). I managed to play along, and even fell for a very old cow joke...Here's how it went:


"Are you a very good speller, Jeannie?" 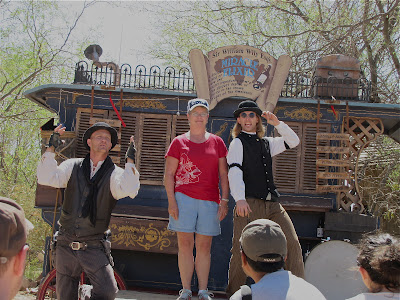 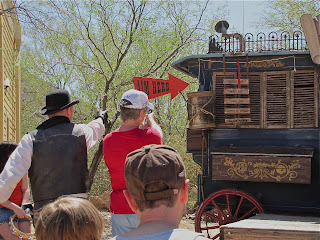 I got to shoot a gun twice (with blanks) to demonstrate the "before" and "after" improvement of drinking Sir William's elixir. They had me point a gun at a water barrel with a tin cup on top and when I shot it, a hole appeared in the water barrel as if I missed. Then I was commanded to drink some "elixir" and asked to shoot again. This time the bigger than life sign came out, "AIM HERE"....I shot again and the cup fell off the barrel. ....They had kids in the audience taking part, too, in which they really had to be on their toes to bang a drum (a grumpy middle school boy enlisted for the job) and a cute little girl to shake a tambourine at appropriate signals from the actors. A bunch more corny jokes ensued, and great fun was had by all, including me!

I got a photo of what happens to horse thieves....Hm-m-m..I think I've seen this guy before... 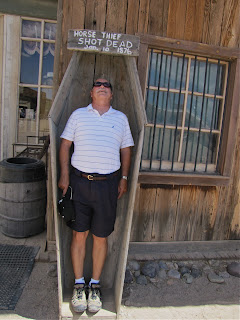 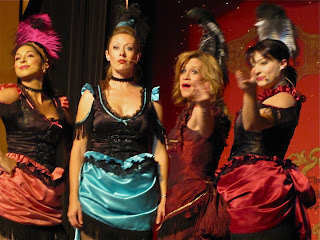 The  museum was interesting...old period costumes, lists of what movies were made at Old Tucson, a cannon displayed that was used in the Alamo movie...lots of props and set designs and interesting information. We saw a saloon show with "Miss Kitty" and her girls with lots of audience participation--think of old timers with little wooden horsies on a stick prancing around on stage...and there's always the wise guy in the audience with his own joke line or two that adds to the entertainment, and an old timer came through with a wisecrack that had everybody laughing all the more....

We thoroughly enjoyed our trip today to the Old Tucson studios...hope you did, too!