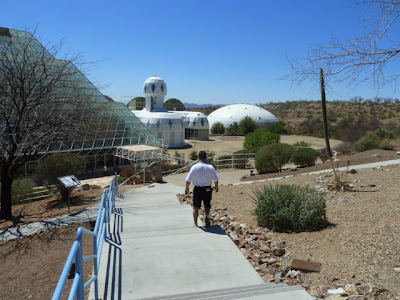 On the road again, just for today, to see a science experiment in a major way....Biosphere 2. This is an interesting place! Take a bunch of seven hippies, seal them into a plastic/glass humongous bubble that is a living microcosm of our world for two years, expect them to grow all their own crops, harvest them and eat them, entertain themselves and be monitored like a group of rats in a laboratory and watch what happens! Think living in a glass bubble  for the whole world to watch and see....this was a 3.14 acre self-sustaining controlled variable environment, the largest greenhouse in the world.....this visionary idea was thought up by a Texas billionaire and the complex was completed in 1991. 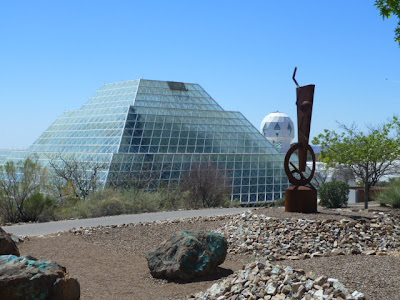 In some respects it was a failure....They started running into problems immediately. Oxygen levels became dangerously low because the plants were throwing out too much carbon dioxide, the "engineered soils" were using up more oxygen than what was being produced through the plants, the concrete floors were absorbing the oxygen as they cured, and living in such close quarters for such long periods of time, the inhabitants got cranky. They weren't able to grow enough food to feed themselves, so they ended up slaughtering their meat supplies early (the chickens and pigs). Because they weren't experienced farmers, they had trouble with insects and plant diseases. The cockroaches and "crazy ants" started to take over! And, the biospherians, as they were called, were always hungry! (I'd be REALLY cranky, too! What, no pizza?) They lost about 16% of their body weight in the first six months. Guaranteed weight loss program!

The technology behind this major complex was really amazing...everything was climate controlled by computers and electronic systems. There were two "lungs" that helped the exchange of air throughout the complex..giant rubber roofs that expanded and collapsed like balloons depending on the air pressure....there are different ecosystems and biomes within the complex---desert savannah, rainforest, a mini ocean with a living coral reef, and more. They "stocked" the biomes with some animals, but not others for fear things would get out of hand. The idea was that the sphere would be entirely self-supporting and self-sustaining....pretty amazing stuff! We had a great tour guide, Carrie, and she was excellent at explaining things in a way anybody could understand....we highly recommend this tour. It was 18.00 a person (with senior or AAA discount)....You look at this complex and think, what a waste of money now that this is no longer being used for its original purpose, but the University of Arizona is still using this property for LOTS of experiments regarding the environment. Its uniquely designed controlled environment allows for all kinds of experiments dealing with nature in a very monitored way. We can find out all kinds of effects that water, soil, air and other things in nature are affected by our habits and the way we live today. There was a student we talked to while on the tour, that is doing an experiment about "green roofs" in the southwest. She is determining what type of plant soils and desert plants will cool housing structures by growing them on the roofs of houses and by what degree. Just like they do at some Carrabas restaurants-green plants on the roofs! 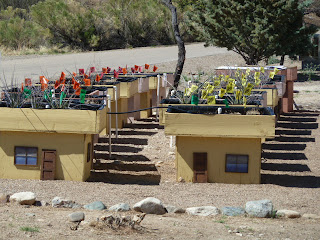 The Biosphere 2 (our planet is the original biosphere) is in Oracle, AZ...in the middle of the desert. Interesting drive, interesting place!
Posted by Jeannie and Eldy at 11:50 PM