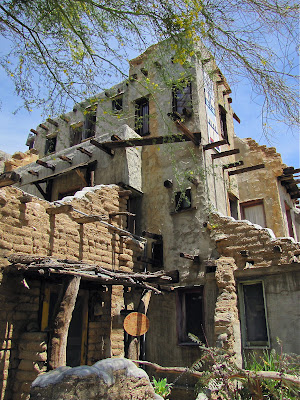 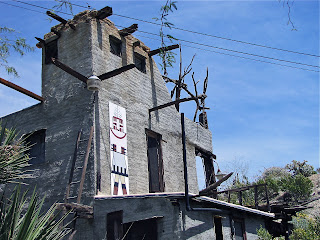 Sometimes I'm dragging Eldo off to places he'd rather not go, usually but not always, it ends up being a so-so tour or just not that interesting if it's just my idea. Things that really grab his attention end up being very worthwhile and interesting, but he's such a peach. He went with my suggestion today anyway to go to Desert Hot Springs, about 30-45 min. from Indio, to see Cabot's Pueblo Museum...It had a great brochure describing the place, very colorful and interesting information on it so I was hooked! We gotta go see this, Eldy!  Cabot's Pueblo, a Hopi style pueblo residence, was the home of a famous man named Cabot Yerxa, who grew up with an Indian tribe as a young boy, became quite the explorer and champion of native American people. What? You've never heard of him? Well, they have in Desert Hot Springs! He was a bit of an eccentric man, a postmaster, an explorer, (he discovered the Desert Hot Springs water--aha!), and he was a guy who had a beloved burro named Merry Christmas. Cabot had some unusual ideas about how people should live, and he built his home based on some native American principles.... 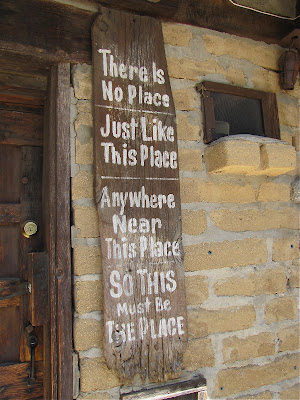 His residence is 5,000 sq. feet with 35 rooms, 150 windows, and 65 doors, and as in custom Hopi tradition, no two doors or windows are alike. He started building it in 1941. He used recyclable materials for the entire residence. Gee, I wonder if the guy that built Solomon's Castle in Florida was inspired by Cabot!? The house has secret rooms, passages and hiding places. (Cabot kept rattlesnakes in mason jars stuck in walls in the rooms when he would have to be gone to deter vagrants.) The tour, which consisted of an hour's talk about the man and his achievements, was informative. But the tour was crowded, there were at least 10 people on our tour, and the rooms were tiny and cramped. It was very difficult to move around and see much with so many people on the tour at one time. None of the secret rooms or passages were mentioned--darn! But there were some things there to grab your interest even if they weren't original Cabot Yerxa designs. See this weather rock? Here's what the sign says:
"When rock is wet, it's raining. When rock is moving, it's windy. When rock is hard to see, it's foggy. When rock is white, it's snowing." 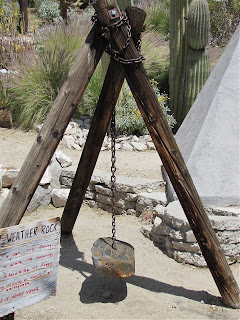 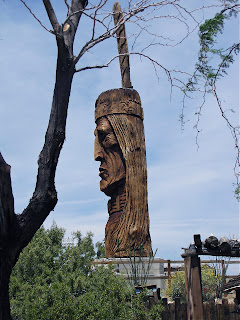 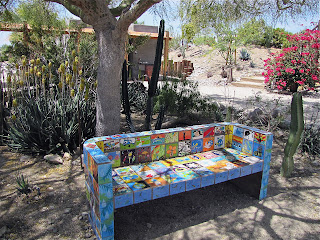 There's a "trading post" at Cabot's place, a small gallery featuring local artists, and some interesting features around the grounds--storage sheds, outdoor cook stoves, rustic tools and machinery and original equipment that Cabot used on his property, etc. There are also artworks that other people have contributed to add to the museum's unique attractions, like the Indian statue above, and the public bench on the left. The grounds were very pretty and the cactus were in bloom. Lots of benches and chairs to sit on just to relax, plenty of shade under mature trees....The fee to explore this unique residence was 8.00 a person.

We enjoyed the beautiful grounds at Cabot's Pueblo Museum today...a nice little trip not too far from Indio, CA. In another day, we will be heading to the Escapees park in Aguanga, CA...finally! It's a little higher up in the mountains (about 2100 feet) and a little cooler. But first, we're off to a weekly festival in Palm Springs...See you at the fair!
Posted by Jeannie and Eldy at 11:50 PM