Eons ago, in Mishawaka, IN, there was a pizza place that entertained you while you ate, with a big Wurlitzer organ with organist playing all kinds of music where you could sing along, or just enjoy the show while eating your pizza. The organ's pipes, tubes, blowers, drums, and all kinds of extra orchestral instruments which were on all sides of the room tied into the organist's nimble fingers on the keys which kept young and old alike enthralled. This place was called the Band Organ Restaurant. It went out of business quite a few years ago. So I was excited to hear that there was an Wurlitzer organ entertainment pizza place in Mesa, AZ, called Organ Stop Pizza. 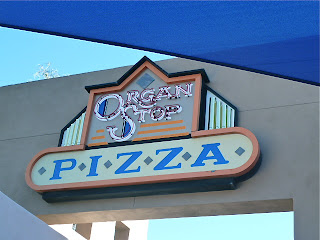 We met some friends there for dinner, and what a treat it was! Picture this--a huge orchestra pit with a beautiful black and gold Wurlitzer organ rising out of the pit as the show starts...the music echoing throughout the large banquet room with picnic style tables, big blowers and pipes causing the window slats to open and close in time with the beat of the music...there is a grand piano in one corner, a player piano in another, drums and cymbals yet in a third corner. The organist is able to make his instrument sound like an accordian, trumpets, bells, whistles, ducks, birds and all kinds of accompanying instruments. Marquee lights flash during certain songs...everything is keyed into the keyboard that the organist controls, even the lighting spotlighting certain instruments around the room. 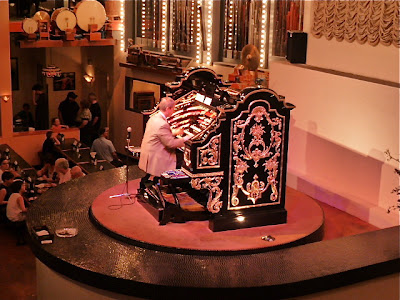 All kinds of songs are played---patriotic, (flags come down out of the ceiling for Canada and the U.S, and of course everybody stands and sings their national anthem), sports fight songs, really old classics, movie themes, and special requests. I requested "Mama Mia" by Abba, and he played it! The organist was excellent, having trained in Europe on classical organ music. At certain times, he plays old fashioned sing-a-longs, and everybody sings. 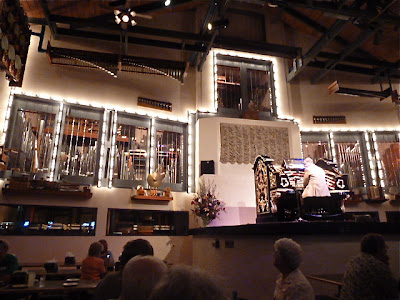 We had a great time with our friends Gayle and Chet Longwell, who we met at a previous rally last year. They work for Passport America. They are from the Chicago area and are national champion roller skaters. Chet used to play the organ at the local skating rink that they owned when they were first married. Who should sit down next to us at picnic style tables, was the guy who repairs the Wurlitzer if it needs it. Not so unusual, but he was a rollerskater at the same time the Longwells were, and they proceeded to talk skater talk most of the night, sharing memories of organists in the Chicago area, and skating memories.  Small world! We see that all the time while we are RVing. You meet people that share the same hometown or know the same people you know when out in this big country of ours.

This place was really great fun, and we highly recommend it...if you go there, you need to get there right when they open. We went on a Thursday night, and the place was almost full by 4:30 PM., which is when the show starts....Organ Stop Pizza, what a treat! Pizza was great, great salad bar and Bluebell ice cream for dessert.
You never know where Eldo is going to go....we end up in the coolest places!  See you on the road.....
Posted by Jeannie and Eldy at 1:15 AM