We had high hopes for St. Patrick's Day. We checked online for celebrations around the towns of Sarasota and Bradenton. We decided to head to Bradenton, it sounded the most promising--a block party with bagpipers, corned beef and cabbage, entertainment all day long under a tent, Irish and Indie music...it sounded fun! St. Patrick's Day is not all about drinking, there were some cool things going on that we missed, we found out later....(Gaelic dancing, hurling, and other Irish sports....) Lots of green being seen, everywhere we went. 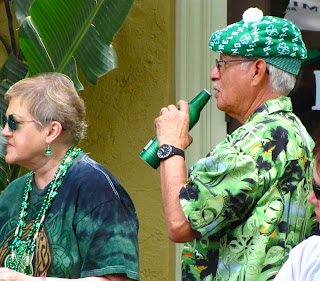 We get to Bradenton's main attraction for the day and it's a dive of a bar, it was called the SHAMROCK.  Definitely Irish, definitely dark and dingy on the inside---and the lines for green beer were snaking around the parking lot/street/block. It was so crowded you could hardly move. The food was nowhere in sight, and it appeared to be THE hangout for the young crowd, they were well on their way partying hearty for St. Paddy's Day. 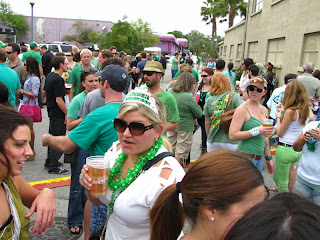 The music that was currently playing were two guys singing that we thought were awful! This half of the duo looked good, but the sound left a lot to be desired. We left. 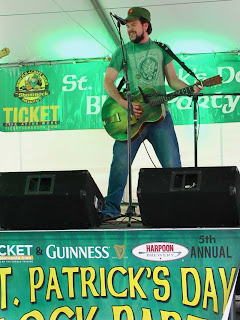 On our way out, we saw this. The guy painting the wall was a little late in his project, don't you think? They must have gotten the idea to decorate the wall at the last minute, although it will be good all year for the Shamrock Pub. 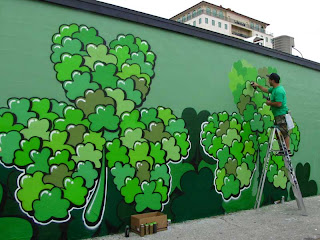 O-o-o-o-o-k-a-a-y...Let's try Clancy's in Bradenton--a little nicer Irish pub, but again, the crowds were ridiculous...(What did you expect, Sparky? It's St. Patrick's Day!) Yep, we should have started out earlier in the day. There was also a parade on Anna Maria Island that would have been a lot more fun--bagpipers, floats, but the parking situation on the island is terrible for special events and we just didn't feel like trying to park with all the spring breakers already in town. On our way from one side of Bradenton to the other, we passed through St. Armand's Circle, the elite boutique shopping center for touristy Sarasota. Sparky saw a bagpiper band playing at an Irish bar in St. Armand's, but as we were driving through the majorly congested area, we kept going, there was no parking to be seen anywhere... 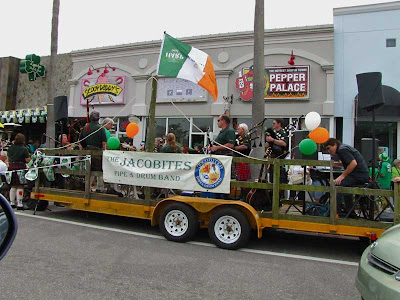 Our final stop? Anna Maria Island Oyster Bar for a VERY non-Irish St. Patrick's Day dinner which was fine with us, although Eldy did get his green beer....

The best fish and chips ever for Eldy, and Sparky had a beautiful salad, huge shrimp cocktail and a crab cake which was excellent! 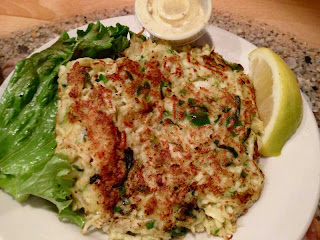 What we SHOULD have done was get our usual FREE paper every week on Thursday, called the East County Observer. That's a great little paper for finding out all the goings on in Sarasota and surrounding counties each week and for future events. It had the full run down of St. Patrick's Day events and we just missed it this week. There's also another free paper section that comes out on Thursdays, called Ticket, and is "your guide to life after work".  It is full of the latest happenings in the Sarasota/Bradenton area. It's an interesting little paper. Just to give you an idea, this week's front cover says, "The Gator Club--A century of prostitution, bootlegging, gambling, ghosts, and good old fashioned partying!"  Sounds interesting, doesn't it?

Back to Sun 'n' Fun for an evening of dancing and an embarrassing contest. The d.j. managed to get 10 unsuspecting couples up front for a contest that he said was not a dance contest, but no hint of what was to come. Here's what is was...the guys had to tie a panty hose stocking with a ball inside it to their pants. The d.j. made all kind of sexual innuendo jokes about the length of the pantyhose, problems with their balls, etc. The guys were initially supposed to put the pantyhose inside their pants and let the ball part dangle down. They weren't having any of THAT, so they tied it to their outside belt buckles. Then their woman partner standing at the other end a few yards away was told to spread her legs, and the guys had to push a tennis ball to them and through their legs. The first one to accomplish this, was the winner. They got a bottle of wine as the prize. Everybody laughed and laughed of course, and some were totally embarrassed as you might expect.  Sparky got in lots and lots of dancing as the night wore on, Eldo was more content to watch Sparky dance with the girls. After all, he and Sparky had played at least 6-7 pickleball games that morning. We had a lot of fun despite the earlier problems with finding a nice St. Patrick's Day celebration. Heck, it ended up being right here in the park!