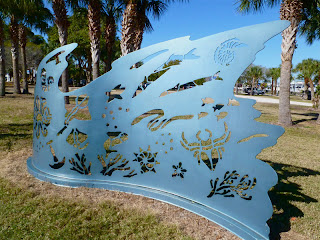 Where to start? Mote Marine Aquarium in Sarasota, is not your usual aquarium. Sure, you can see sharks, and manatees, and see some touch tanks...But there is a whole lot more to the aquarium. It's a research/study center, and there are lots of parts to it where there is training and scientific exploration going on that is easily accessible to the public. The amount of information that comes out of this marine aquatic research center and aquarium is AMAZING! They have 1600 volunteers working for them! A couple of lady volunteers tried to recruit Sparky today to consider volunteering next winter. She  might just do that, it was such a cool place! Nineteen dollars for adults to get in, and if you can find a coupon online or in local brochures of things to do, you might save another 2.00.

Let's start with the marine mammal research center. It's across from the aquarium. Not only is it a research center, but it has a sea turtle rehabilitation hospital and a dolphin and whale hospital inside, too.  Mote Marine provides state of the art critical and chronic care for stranded and sick marine animals. They rehabilitate them and return them to the wild as often as possible. One hundred eighteen sea turtles were admitted to the hospital in 2010, as an example. That's a lot of turtles!

It was feeding time for Moonshine, a type of pantropical spotted dolphin that could not be returned to his native waters because of a liver disease, which brought him to Mote in the first place. He could not be returned to the wild because of his condition. He is the only pantropical spotted dolphin living in human care in the U.S.  Moonshine has been trained to accept blood draws, and other scientific procedures which are done humanely and carefully as to not distress the animal. 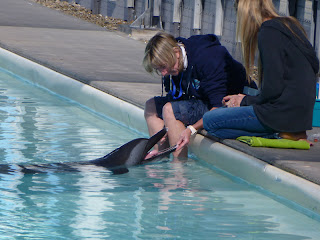 Sparky watched as the vet tech told him to turn over, he did, and with his flippers up in the air, he patiently waited for the needle prick. The techs pull his tail up into their lap, and the dolphin just patiently waits for the blood draw. 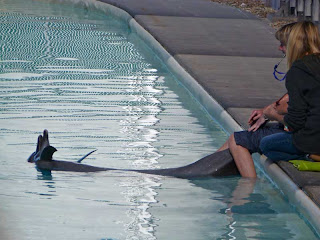 They've trained him to accept little pinches when they are not drawing blood so he learns to accept the needle prick. The pinches are interspersed with LOTS of play during the day so the dolphin really gets used to being prodded and poked. The techs were very loving and enthusiastic with him, gave him lots of praise, and he didn't mind the blood draw at all. He "talked" a lot with squeaks and chirps and seemed to enjoy the company of the two ladies who were working with him. Moonshine has been there nine years, and has contributed much to the study of dolphins at the research center. 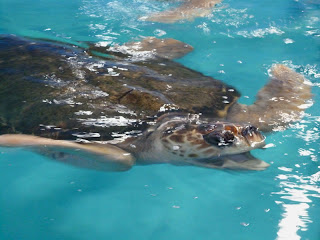 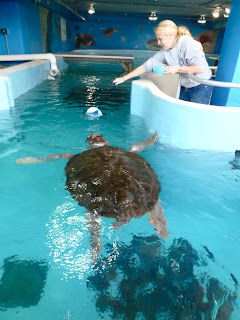 Some really big turtles are at the research center....a couple of BIG loggerheads, a Kemp Ridley, and some others....Sparky watched as the turtles were signaled with a blue triangle flag that it was feeding time. They boogied to the gal who had big jellied squares of turtle food goodies for them. The food looked like giant laundry Tide pods! It was fun to watch them feed.....

Sarasota beaches have the highest density of nesting loggerhead turtles in Florida so there's a good chance you might see one during nesting season if you were here, which is May through October. The less humanly populated beaches are, of course, the most favored by the turtles. 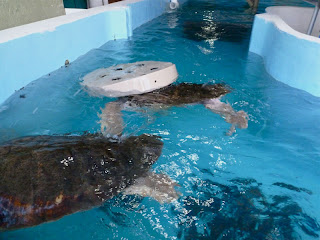 They had interesting some "educational learning apparatus" for the turtles. TOYS! One looked like the top of a plastic card table with holes in it the size of golf balls. The turtle like to get the table top on top of his head and then move it around with him.

The turtles were very active...It's the time of year for them to be on the move to nesting grounds so that innate swimming urge is in motion, they were on the move constantly today...Sarasota beaches will have LOTS of nesting turtles starting around May...Good thing the spring breakers are all gone by then! 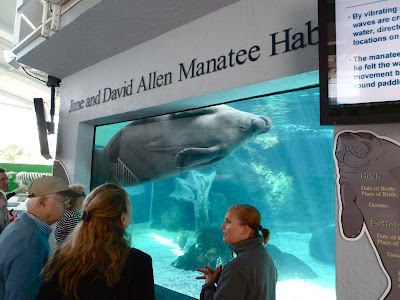 There were two manatees, Hugh and Buffet, who are the most extensively trained manatees in the country. The manatees have been trained for research and medical procedures in addition to the dolphins to help maintain and protect wild manatee populations. They VOLUNTARILY participate in regular checkups. Would you believe they are trained to pee in a cup? Yep, REALLY! They are learning a ton about the manatees from two manatees in the research center, like how they respond to touch in their environment. They have been trained to "answer" questions by touching a paddle when they sense different parts of their body being touched by water wave movement. They can't see very well at all but hairs all over their body and especially on their face are like sensory antennae for them, and that is how they explore their habitat. It was awesome to see them swimming from a vantage point down below them. They are such graceful swimmers! It was beautiful to watch them swim....

Most people know manatees are vegetarians...Wanna know what they eat at Mote? Every day they eat 72-96 heads of romaine lettuce and kale, carrots, beets, apples and monkey biscuits with vitamins. But it's illegal to give food OR WATER to wild manatees, just so you know!

Sparky saw so much stuff today and learned so much, she's going to have part II tomorrow about the Save Our Seabirds Center which is on the Mote Aquarium grounds and lots more photos...Good way to use up two days of blogging, heheheheh....See you later!