Did you see Sparky's reference to Mike Wendland's Roadtreking website the other day? If not, it's a great website/blog/travel newsletter from a journalist turned RVer. Mike is traversing the country in a class B with his wife and elkhound. That would be some tight quarters! At any rate, he mentioned a website that will compute the cost of fuel for a trip. It's pretty cool! It's called Cost 2 Drive. Although it's for cars, you can click on "can't find my car" and put in your 1) m.p.g.  2) how big your fuel tank is, and 3) fuel type (diesel in our case) and voila! The price of your trip for fuel! Not only that, but a little map shows up with your starting and ending point and a little gas pump telling you the name of a station where you will probably need to be fueling up by that point, what the price of gas is, and what date that price was accurate. The accuracy of fuel pricing might be a few days behind, as Sparky did a sample trip from Sarasota to Houston, TX and the price of fuel quoted was about four days ago. It's a very simple, easy to use interface. Sparky's kind of website! 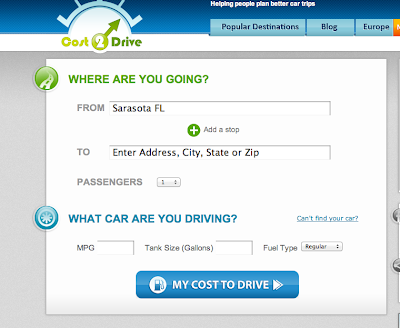 Sparky played five games of pickleball this afternoon at the women's social pickleball sessions from 2:00-4:00 PM. She could hardly walk afterwards, her knees and ankles are complaining. What's up with that? SHE WANTS TO PLAY SPORTS! She USED to play raquetball and soccer in her thirties and forties, now the body is saying, "Forget it, girlie! You ain't no spring chicken any more!" Well, the heck with that! Sparky is going to play anyway! So she came home and iced her knees and took some Aleve, and she's as good as new! (As long as she hangs onto me walking down the street this evening! says E.)  Eldy is chuckling to himself because, just a short time ago, Sparky was impatiently walking faster than he cared to, wondering why he wasn't keeping up. He never heard Sparky complain about any bodily ailments but all of a sudden, since Sparky turned 62, she's falling apart! Sparky actually couldn't keep up with Eldy last night walking across the parking lot. Phooey! The knees hurt, the ankles hurt, the toes hurt..Aleve is going to be Sparky's new regimen..She's been stubbornly not taking it but once in awhile figuring the longer she holds out to start, the less dependent she will be on it early in the game. (I've got news for you, honey, says. E. It's later in the game than you think!)  Sigh... OK, enough complaining! That's all you are going to hear from Sparky unless she's flat on her back or broken something! 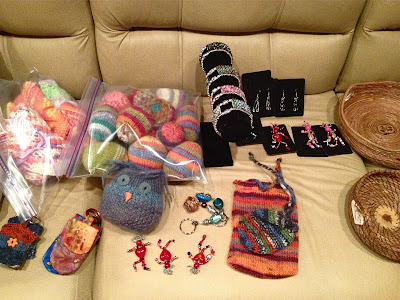 All day today, Sparky spent getting ready for the craft show...making sure she had things to display her things on...and how to decorate a little table with what little she has. Tomorrow morning is the craft show from 9:00-12:00. We'll see if Sparky's plans to make a little extra money pan out, or it's back to the drawing board. (OR--sell off some of these craft supplies? suggests Eldy.) HELL, NO! Sparky LOVES to make things and even if they don't sell tomorrow, there's always another craft show, right ladies? :-)  Eldy is heading back to his captain's chair to do some research on the computer. He KNOWS Sparky won't sell any craft supplies until she's incapacitated in some way....(Heck, she's busy buying more at the Michael's 50% off ENTIRE stock of beads this week! says E. Maybe I need to take more day trips out exploring so she doesn't have a car. Now there's a plan.....)

Plans with friends are coming up...We're heading to a dueling piano bar tomorrow evening with friends in the park...

The Laubenthal's are here at Sun 'n' Fun this week, we're going to get together with them!

We will see you later!