You know, there are so many charitable causes around that are begging for your hard earned dollars. We found one today that was really wonderful and one close to Sparky's ever lovin', teachin' heart. It was called "Giving Hunger the Blues" and boy, what a combination--great music and feeding hungry school kids! Sparky thinks it's great when people want to donate their time and energy to causes of all kinds. We try to do that, too, but we should do more! Sparky does her best to contribute to the local economy, does that count? Just a little joke! Sparky has a special wish and hope that more people donate time, energy, and monies to where people hurt right here in THIS country. How about right here in this county? FIFTY percent of all school age children in one of the wealthiest counties in Florida, Sarasota County, are on free and reduced lunch and are going hungry on the weekends. 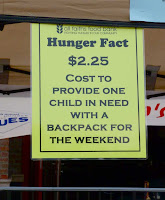 Downtown Sarasota had a terrific block party today to raise funds for All Faiths Food Bank, to provide backpacks and food for the county's hungry kids. The food bank provides 88,000 meals a week for hungry families who can't make ends meet, elderly seniors, and parents in minimum wage jobs.

The donation to get in today, was just 5.00, enough to buy FORTY meals...(Sparky needs to find out where they shop, laughs E.) She knows. :-)   The food comes from a huge portion of donations from the public, from the US Department of Agriculture, surplus donations from restaurants, etc. All the donations today went to fund children's food programs--Cooking Matters, Kid’s Cafe, The Backpack Program and Growing Healthy Kids.

Sparky knows all about hungry kids...in just about every school corporation she taught in, there were hungry kids in her classrooms every day. It didn't matter whether it was Mishawaka, IN, Grayling, MI, or Angola, IN, kids came to class hungry. Sparky used to keep a loaf of bread and a jar of peanut butter (before peanut allergies became so prevalent) in her classroom and fed kids who didn't get enough food at home.

We had a great time today and so did a BUNCH of kids that came out with their families.....Lots of arcade type activities for the kids, great food from local restaurants, and awesome music.

Did we say the music was wonderful?...Lots of rockin' the blues, bands, ensembles and entertainment all afternoon long. The threat of rain held off and Sparky got her mojo on, first seated, but that didn't last long. 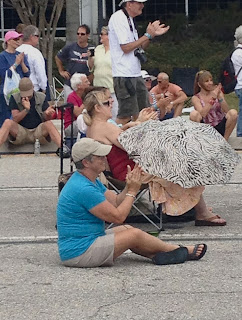 Then, she was up, standing close to the front of the stage, dancing in place. Fogt's All Stars played some awesome blues and rocked the stage. Love that green trombone, but Eldy says that coating a trombone like that affects the sound in a negative way. The trombone player sounded pretty darn good, though! 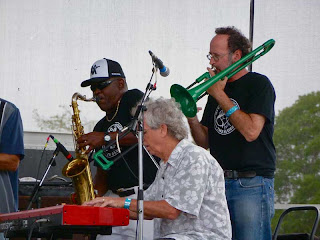 They had a couple of sax players and a trombone player that were really movin' to the music on stage, and you could tell they were having a ball playing with the group. Fogt's Music store had several of their guitar teachers in the loosely organized band for special occasions, numbering around twelve musicians. 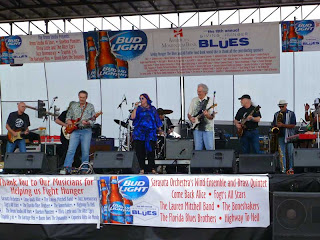 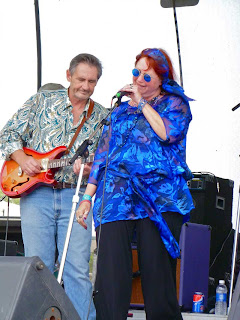 Eldy was caught checking out the Aveda "HAIRstream", ...Maybe he thought he could get  haircut today! Haha...It was more a makeup trailer than a salon... 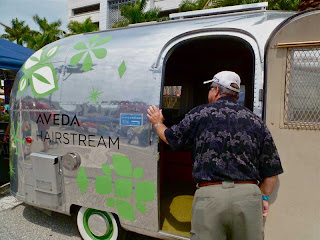 They had another stage devoted to youth bands...The louder, the better! We didn't stay long at this end. There were some great young performers out today..... 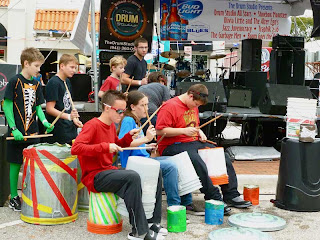 We thoroughly enjoyed ourselves for a great cause today.....Less kids will go hungry this year due to the wonderful support of the many folks who turned out today in great numbers.....Great food, great music, great times! 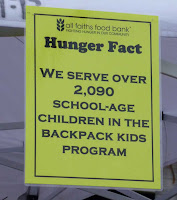