We'd been hearing about Shark Valley, part of the Everglades National Park...I guess I DID know that there was the Everglades National Park in Florida, I just didn't realize that Shark Valley was a part of it. It's on highway 41,  straight east, about 70 miles from Naples. We heard there was a 15 mile bike trail through the heart of it....We wanted to check that out so we did! Our senior pass got us in for free...Otherwise, you pay a 10.00 entry fee. Park opens at 8:30 AM and closes at 6:00 PM. 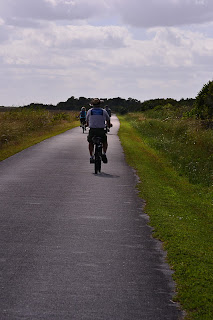 You can walk several shorter trails there or you can walk the 15 mile one that a lot of people choose to ride their bikes on. We did see several people walking the 15 mile trail. The bike trail through the park was an incredible experience! There are alligators everywhere, lying along the trail WITHIN A FEW FEET OF YOU. You could touch them if you wanted to. 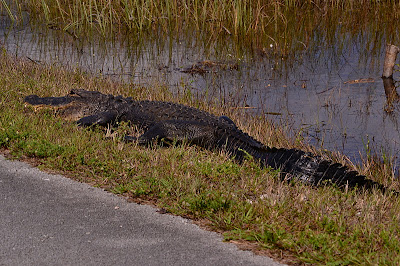 This just confirmed what we heard yesterday, that alligators are considered docile unless they are hungry, and if they are hungry, they will go after something if their prey is at their eye level. OR SO THEY SAY! We couldn't believe it that people WALKED this trail as well as biked it, after seeing more than 12 alligators sunning themselves along the walk. Unbelievable! If the park thinks we're gonna stop by this sign if a tram comes by, it ain't happenin'! 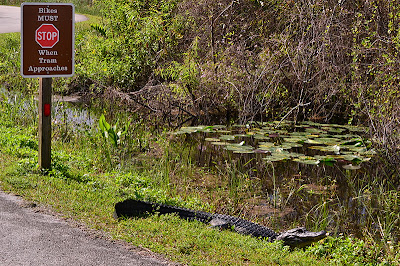 The literature that the park hands out says stay at least 15 feet away from alligators. That was tough to do today, THEY WERE RIGHT THERE! 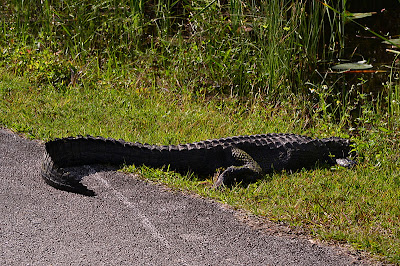 Most of them paid no attention to us, but ONE of them raised his head as Eldy was riding slowly by, and about gave him a heart attack! He paid no attention to me whatsoever! Guess he thought Eldy looked interesting in his straw hat! I can't believe they let people go out on the trail with the alligators so
close. A couple of times we actually had to drift over to the other side of the trail so we wouldn't run over an alligator's tail! 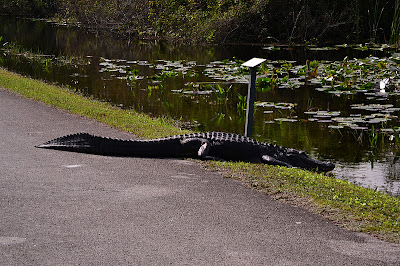 It was an experience we won't forget! AND, Eldy and Sparky both rode the entire 15 miles today! We don't know how long it took us, we stopped a bazillion times so Sparky could get photos...There were so many wonderful things to see....Like the egrets taking flight... 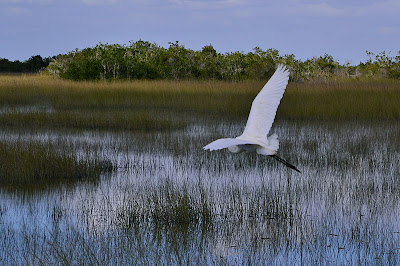 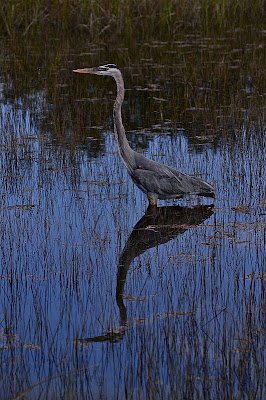 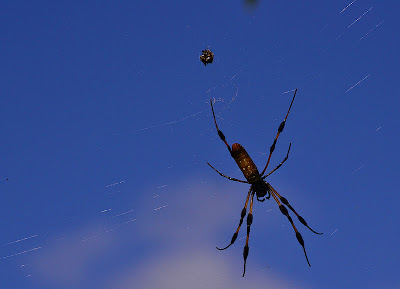 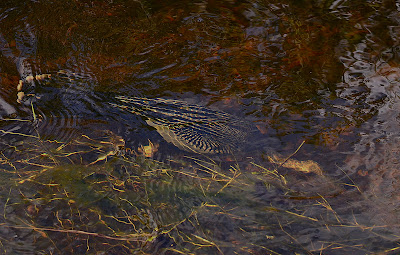 And the reflection of the skies in the grassland waters.... 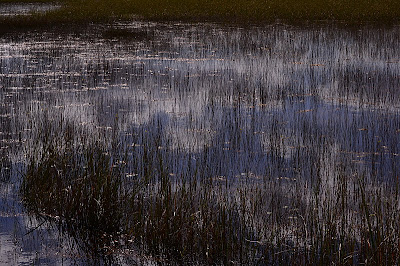 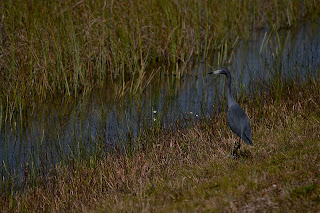 If it was later in the winter, we would have seen a huge variety of birds. Today, we saw egrets, common types of herons, and lots of anhingas drying their wings again.....I guess later in December and into January, all kinds of birds start showing up in the park grasslands and trees.

There are three ways to visit Shark Valley...walking, biking, or riding a tram along the 15 mile loop trail. The tram is a two hour narrated ride with a naturalist or park ranger. There is an observation tower and restrooms halfway through the trail where you can stop and get under shade for a little bit. You can stop for a picnic lunch if you bring your own, walk a spiral ramp to the top to see a 360 degree view in the park. You can even see alligators down below. 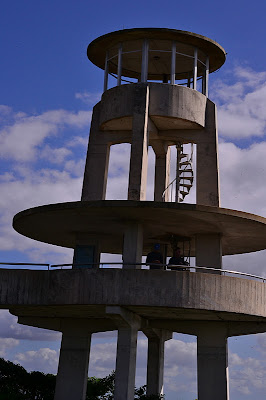 I think that about covers it...gotta be a record for the number of photos in a post today...but they were all important to me in remembering what a special day it was today....hope you enjoyed our visit to Shark Valley. Thank you to our blogging friends who mentioned that we needed to go see Shark Valley, and thank you for the nice compliments we receive over time on our blogging and photos. We really appreciate your feedback and interest....Sparky and Eldy
Posted by Jeannie and Eldy at 6:47 AM