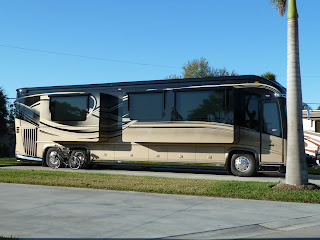 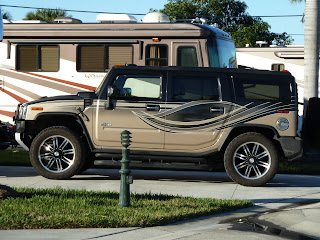 Let's see..we started at 9:30 this morning..on our way out of the Naples Motorcoach Resort, I took this photo of a Newell  RV. Looks like a really nice rig, doesn't it? This nice rig is a million dollar coach! Now figure the Hummer in with it with its custom paint job. Yikes! I've seen photos of these coaches in magazines...the interiors are quite glitzy. Wonder what you get inside for a million dollars? And my other question is, what do these people do for a living, or what did they used to do? You don't see these at RV shows, they are custom coaches and take months to build...Curiosity is one of my virtues (and curiosity killed the cat! says E.) I might have stopped and chatted with the owners had I seen them out and about.
But we never did see anybody there. 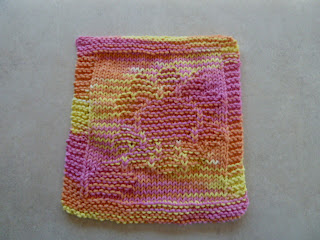 After knitting one dishcloth, one partial Easter egg (these are going to be really unique in color--they're from sock yarn), three magazines and  a nap during the day today while Eldy was driving, we stopped for the night. That's eight hours of driving for my Eldy and about 450 miles....what a guy! We picked a Passport America campground in Quincy, FL. for 20.00 a night...we could have stayed at Wally World, but Eldy really wanted to kick back and relax and be able to put the slides out. That's a no-no at Walmart. Uneventful drive today except for two sightings of deer, three or four of them several miles apart on I-10...on the WRONG side of the tall fence, on the highway shoulder just ready to run out and be whacked by a car or RV.  Eldo was nervous! We are spending one night at Beaver Creek Campground...where's the creek? We have no idea. This is a grassy field behind a BP gas station, exit 174. The campground is very close to the interstate so it's a one night stop, just electric, which is fine by us. It's 50 amp, and very few people are here so we shouldn't have any electrical problems. We just have car problems....nothing much, just another D.O.A. battery. Dang this car! It looks like I'm gonna have to crawl under the dash and look for the fuse I'm supposed to pull! Why me, you say? Isn't that a man's job? Nope! It goes to the person who has the better knees, and that would be me. (I would if I could! says E.) No problem, honey! I have to carry my weight around here since I don't drive...gonna work on that one when we get out to Arizona..need to get some driving under my belt in this Phaeton.

It's a cold, starry night out tonight..incredibly beautiful night sky because there's no light pollution. If it wasn't so cold, we'd be outside star gazing...but football is calling Eldy, so I'm gonna knit my little fingers off tonight while he watches the game.

We MIGHT be going to New Orleans! Woo-hoo! I've never been there! We've got a campground in mind, Pontchartrain Landing. It should be a doable drive for Monday, about 350 miles. We'll probably stay two nights so we can see the town Tuesday. There's a shuttle service for 4.00 a person that takes you to town and back. Sounds like a great deal! We've heard New Orleans can be a little dicey as far as crime goes, so we'll be careful....


You never know what Eldo has planned...we'll see what happens tomorrow...life is certainly an adventure with Eldo around!
Posted by Jeannie and Eldy at 11:30 PM