Sunday in the Park 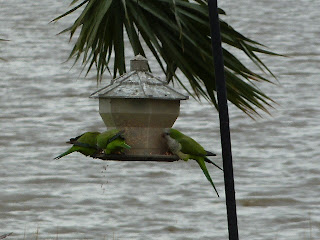 It's raining cats and dogs occasionally today. In between rain showers, I got out on my bike and went around to look for the parrots again. They're keeping dry which is smarter than I am today...out riding my bike with a sore knee and a wet butt from the wet bike seat, but I did find some. They really like these feeders that move in the wind. The office gal said she counted twenty of them the other day on one feeder! I guess these birds are really Monk parrots or parakeets. They are a smaller than parrots. The term parrots seems to be used interchangeably with parakeets. They are originally from South America, and have made their way here on ships and boats, and one story goes, from an elderly man who had quite a few of them and couldn't take care of them any more, so he set them free.  I like that story, just not sure it's the right one. At any rate, they have adapted well here. Apparently, they like to nest in the electrical towers and wires around Kemah and Dickinson! I sure am tempted to put out the birdseed for them, but would be feeding the hordes of grackles (?) as well. There's a lot of birding places down here on Galveston Island, we plan to check them out when the weather improves. 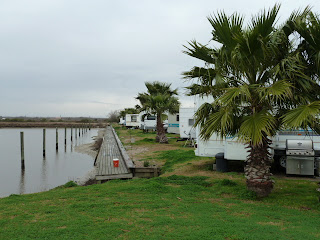 Here are some more photos of the campground...it's raining today so it's very grey looking everywhere, but it's still a very pretty campground in comparison to  many of the other places we've looked at so far.

There are two fishing piers here...I wish they had some activities for the adults, but they don't other than a Super Bowl party next Sunday.....since we're going to be here for awhile, maybe I'll try to start a weekly activity of some sort..like a dock BBQ supper or something...hmmm, I'll have to think a little more about that...not ready to start a knitting club just yet, still learning..no tennis court so we can't do pickleball...don't know how to play cards, but game night is not a bad idea....everybody bring their favorite couples games! I like Taboo, personally. What is your favorite game if you were to bring one to a party?

Here is the resident duck...he is HUGE in comparison to the rest of the duck population swimming around the ponds and bayou. Wonder what kind this is? 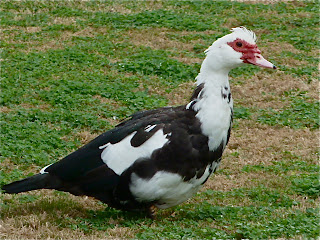 We're going for a drive this afternoon. It sure is great to have the car with us. We can really explore the areas wherever we are which we love to do. We are going to check out another RV park on Galveston Island called Jamaica Beach RV Resort.  Galveston Island State Park is another place we are going to check out at another time. Tomorrow afternoon, I head to Spring, TX to see Kerry again. We're going antiquing!  I heard it's going to only be in the 40's Tuesday and Wednesday and in the 20's at night (!). That's great sleeping weather if one is having hot flashes! (Eldo has nothing to say on that subject, bless his heart) Looks like we'll have to wait till warmer weather to do some outside sightseeing ....After exploring today and finding out that Jamaica Beach is a very reasonably priced resort with a BIG pool, fitness room and some other amenities, we've decided to stay a few days at the end of February to see the first weekend of Mardi Gras here in Galveston. Sounds like a great time in town!

Our last event for today was to have a nice dinner with Greg and Jan White, who help Nick Russell (Nick's Blog) with his Gypsy Journal rallies...We really enjoyed talking to Greg and Jan, veterans of full timing for three years. They gave us lots of tips of places to stay out west in California, Oregon, and Washington.. We had a terrific steak dinner at T.Bone Tom's, a modest cafe style restaurant with fantastic steaks. I also got a tip for my aching knee joint...DRINK! says Jan. Well, I do..at least one glass of wine a week..No, silly! She says drink "Joint Juice", a fruity flavored beverage with glucosamine and chondroitin in it, available at WalMart and Sam's Club. I've been thinking about taking those supplements for the past year, and now it's time to do something about it. I don't know what the heck I did to my knee other than ride my bike, which I've been doing since last June, but all of a sudden the pain is so bad, I can hardly walk after sitting for awhile. After I get going, the pain eases up a little, but it's keeping me awake some at night, so time to self-medicate! With our darned expensive, high deductible health insurance policy, I'm gonna stay away from the doctor and try and take care of it on my own for awhile. If that doesn't work, then I will go to the doctor. (I''ll buy you a case of that stuff! says E.) Ok, health experiment/diet regimen...I've already got a bottle of cherry juice in the fridge that I was going to try. Time to stop procrastinating!  Time to start drinking! JUICE!   That's all for today, folks!
Posted by Jeannie and Eldy at 9:34 PM