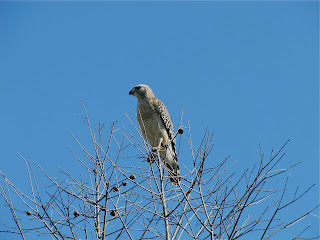 We ventured a little farther east on 41 yesterday....past 10,000 Islands Preserve, about another 25 miles east to the Fakahatchee Strand Preserve which sits on a gently sloping limestone plain. This is a very unique preserve in southern Florida and it's part of the Big Cypress Swamp. Channels have been formed over millions of years from the limestone dissolving. The local term for the channels or sloughs is called "strand". You see this word "strand" used a lot in this part of Florida. There are cypress forests and open plains and grasslands, which make for some unique habitat for flowers and trees and animals. The strand is 20 miles long and 3-5 miles wide. It contains the largest stand of native royal palm trees and the largest concentration of orchids in North America. There are some endangered animals here as well--the Everglades mink, the Florida panther, woodstorks, and others.

We did not go into the swamps to see the orchids. I would have loved to have seen some of them....but it's 60.00 a person for a three to four hour walk with a naturalist, and only available on certain Saturdays and other arranged times. We did take a drive however, on the Janes Memorial Scenic drive, an 11 mile limestone, washboard road for some of it. Saw about 8 gators....a large doe ran across the road, and an imagined panther WA-A-A-A-Y down the road, actually couldn't tell what it was! (just some wishful thinking!) The gators were right at the side of the road, like TWO YARDS from the door. I stayed in the car....smart gal! (You're finally getting the message, woman! says E.) We saw some hawks, a big turtle, and the usual egrets and ibis. The preserve looks just like a tropical jungle with mangled trees and swamps mixed in along both sides of the road and most of the road is very narrow and rough...the park ranger told us that a photographer had seen a female panther with two cubs on Janes scenic drive at 10:30 in the morning about two weeks ago. He showed me her photos on the computer. They were wonderful! Of course she had a 1500.00 camera with an additional 1500.00 lens so the shots were terrific! With our little camera, the panthers would have looked like little tan fuzzballs, probably 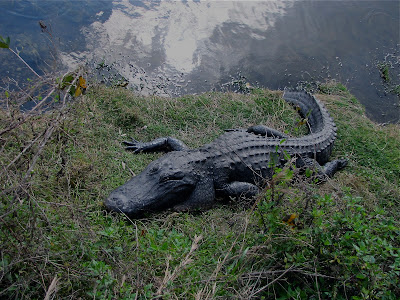 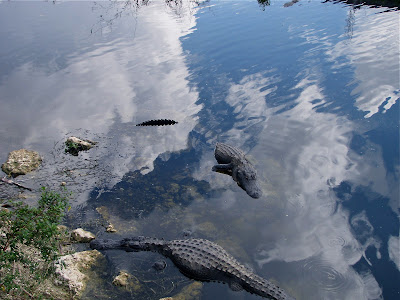 Then, on the way back, we watched for gators on 41 again...gater after gater after gater, and really big ones! These were much easier to see from the highway this further east. There's a welcome center on 41 east, about 45 miles from Naples...it's called the Oasis Center. There's a boardwalk there with a canal FULL of huge alligators..we stopped to watch them. One of them had gotten a bird and two others were trying to take it away from him...There was lots of thrashing going on in the water, but most of it underneath...couldn't get any photos of that, they were a little too far down the canal to view. Right at the entrance of the welcome center on the other side of it, the UNPROTECTED SIDE just over the guardrail, were two humongous alligators. People kept stopping on foot walking from the parking lot over to them to take their photos right in front of them, just a few feet away, yours truly, included. The park ranger had to come out and announce thru a loudspeaker to GET AWAY FROM THE ALLIGATORS!!!! IT'S NOT SAFE TO BE SO CLOSE! I had already left by then....(You're going to give me a heart attack one of these days! says E.) 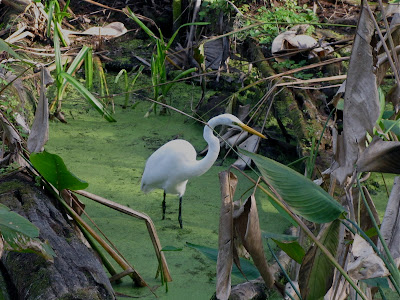 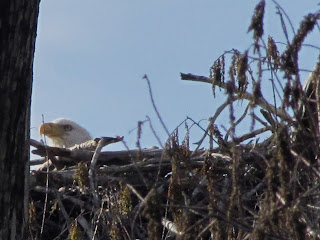 One last stop today...boardwalk at Fakahatchee Strand....this is not at the park itself but back on 41 heading west towards Naples, near Indian Village....this boardwalk takes you back into the swamp. We saw this egret and people said there was an alligator that had just snatched a bird and went underwater with it, we missed it!  Little signs along the way tell you about plants and what you are seeing...I learned that the gambusia is a kind of fish that eats mosquitoes and it bears its young ALIVE, it doesn't lay eggs! You see lots of "air plants" here...those are called epiphytes (eppy-fights)...they look like they are separate plants growing right out of the trees. They are! They just use the trees for support and get all their food from the rain, sun, and air. Spanish moss is an epiphyte and so are bromeliads and onion orchids.  We saw a bald eagles nest. Man, those nests are HUGE! I think someone told me they just keep adding to them every year and that they can eventually weigh over 1,000 pounds? On the way out of the park, close to the parking lot, I smelled something really really nice...I thought, hmmmm, orchids? gardenias?  It was the portable toilets at the entrance to the park walk! I'm glad nobody heard me comment about the nice smell and what was that wonderful flower I was smelling!?

It's almost time to leave for Texas...we'll be leaving early Saturday morning...not sure how far we will get in one day, but we will be sad to leave Naples...there's so much here, and it's so beautiful...there are many RV parks and places to stay here..we explored a couple of campgrounds yesterday that had just electric and that's it...it would cost us about 10.00 a night to stay there...we'll definitely be back and want to stay there for part of our visit next year....we're heading to Fort Myers today to see the RV show vendors....see you later!

PS. Just a quick note about the RV show...we signed up for Thousand Trails membership for one zone. They are offering any one zone membership for a fee of $199.99 as opposed to 499.00. If anybody is interested in signing up for that rate, they are offering the same deal as the Tampa show. If you contact me and I refer you, you can get that same rate even if you weren't at either show. There's a limited number of memberships available and it expires Sunday, January 23. Leave a comment on the blog if you are interested and I'll get back with you asap.
Posted by Jeannie and Eldy at 3:42 PM

Email ThisBlogThis!Share to TwitterShare to FacebookShare to Pinterest
Labels: Fakahatchee