Time to Pack Up!

We woke up this morning to a heavy heavy condensation of moisture on everything...all our camping chairs are extremely saturated. It's been a 90% humidity level for the last couple of days here in Marathon...ugh! ..so we are going to wait for things to dry out a bit before putting things away in the bays. We're excited to have added two more followers to our blog, thanks to Gail Durham and Trailer Camper for picking up our blog. I've been a little remiss in saying a personal thanks to people who find us interesting enough to commit to being a follower. I think that's blog etiquette (which I'm rather new at.) I'm always amazed that my personal ramblings about what we do or don't do would be interesting to others! So thank you to each and every one of you previous followers for coming along on our journey.....Speaking of journeys, we wished we had checked out Islamadora (I-LA-MA-DOR-A) I've been calling it Is-lam-a-dor-a for most of the week...it's on our way from Marathon back to mainland Florida. Lots of cute shops, cool restaurants..it's a good thing I don't do a food blog! I'd be 350 pounds in no time! And Eldy and I would be broke...we'll visit some of the other keys like Islamadora and Key Largo next time down to this area...

We didn't go to the beach yesterday...it just seemed like a wonderful day to sit and relax under the palms right at our site. There was a nice breeze, and the songbirds were just going to town. Different songs I've never heard of, of course. One of these days, I'll have to get out the binoculars and see what kinds of birds sing these beautiful songs. Boy, I AM getting old! Listening to bird songs and now knitting!  I knitted for a good part of the afternoon--I'm learning how to knit starting with dishcloths. (We now have plenty, Sparky--can you make something else? says Eldo) I'm also working on my first knitted garment, a pretty sleeveless vest. It's actually my second garment. The first one was overly ambitious and way past my beginner skills. So after ripping it out three times, I threw away the pattern out of disgust, and am going to save the yarn for another project. At any rate, we were just being lazy like you should in the keys! As someone said, "Catching the Keys disease..".We chatted with some of the people in our park who passed by, and some close by neighbors stopped by to give us a tip about a park here in Marathon that only charges 400+ dollars a MONTH! They thought it might be worth checking out. So we went looking for it. I didn't whip my camera out to take photos, as this little park was so AWFUL, we didn't feel comfortable and got out of there quickly. It was jammed in trailers and mobile homes with only one RV in the whole park. Many of the units seemed to be about 20-30 years old  and falling apart, there was graffitti and junk strewn around, and the little streets and corners were so tight, you couldn't have driven a big rig into the little park without taking out someone's mobile home! So much for that idea! 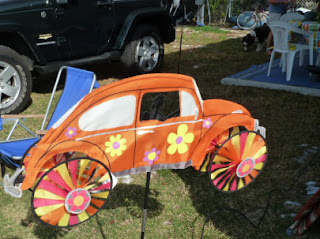 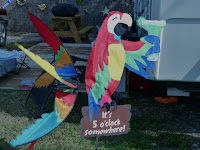 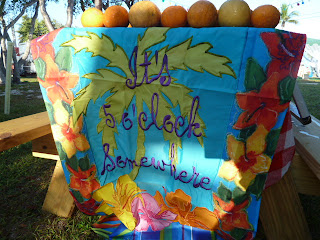 Yesterday afternoon we did go check out a little store in Marathon called Marooned in Marathon. I could get marooned in this store easily..it was jammed with everything tropical you could possibly imagine! Wow! A store that visually assaults the senses! I was looking for a whirly-gig to place in front of our site. I used to think those things were tacky...and to some people, I guess they still are. But whirly-gigs are commonly seen as a way to personalize your camping site and make it more your home away from home. In our case, our mobile yard.  I didn't pick the Volkswagon whirly-gig, nor the frog in the convertible whirly-gig,  but I did get a pennant/flag that looked very tropical, and says Eldys favorite saying these days, "It's five o'clock somewhere."  Hey, it's five o'clock all the time in the keys!  If you don't have a whirly-gig, you DO need tiki lights to RV...those are those little lights strung out across the awnings, or across your yard, or across something at your campsite. We have three kinds so far (uh-oh! you mean we're gonna get some more? says E.  Yup!)--little martini glasses, little box lights, and little hot air balloon lights. But we are having trouble getting them attached to our awning so much of the time, we haven't put them out. We can't decide whether to turn off the wind sensor and have the lights clipped on or put them up in a different location so we don't have to worry about the awning. We've had a lot of wind lately, so we're watching our awnings. It's a lot of trouble to put lights up when you stay for short periods of time, and it takes a ladder to get them on the awning. We've tried shepard's crooks and an assortment of foliage to put them up when we do... BUT when we get to Texas and stay for a month, they are ALL coming out and going to be on display. We're going to be REALLY tacky for awhile...but don't worry, Eldy, it's going to be tastefully tacky!  Here's someone's site at the Jolly Roger Park that shows a little personalization... 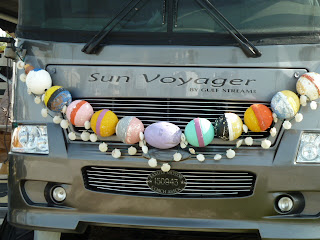 Here's another yard site...We don't have a sign yet, it's on my to-do list: Eldy will have a Notre Dame sign, for sure! but NO pink flamingoes in this house! 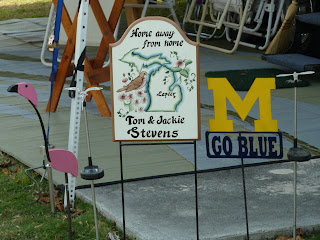 Some long time Jolly Roger residents or snow birds, even have a garden! 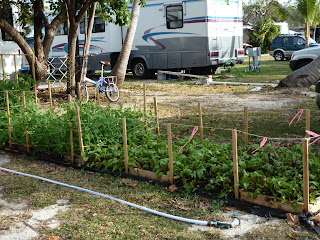 Well, we are leaving the Jolly Roger Travel Park in Marathon today...time to get going, Sparky!  Bye-bye pelicans! See you again in beautiful Naples..this is where we are staying for the next two days while Eldy visits his ailing friend. We are staying on the other side of town, far away from the knitting store (sniff, sniff). I won't be able to ride my bike there, which is probably a good thing....see you later! Oh, almost forgot...We can't possibly leave the Jolly Roger RV park without a bad pirate joke. What kind of socks does a pirate wear? 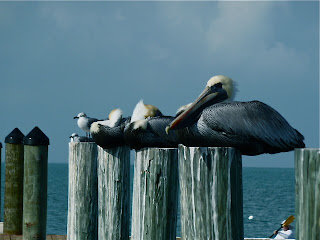 AR-R-R-R-RGYLE!
P.S. We've arrived at our destination, Naples Motorcoach Resort...change that two days to stay to at least four days...yes, it's expensive (69.95 a nite special running currently)...BUT--we got comped one night as in FREE after the office gal saw my Tastefully Simple sign on the side of my car. She says, "How would you like to do a show at cocktail hour on Friday?" Cocktail hour? We're in! Free night on the resort to do a taste testing party? We're in! THREE pools, we're in! Extremely large sites? We're in! An 18 seat deluxe movie theater, a fitness center, a boat ramp launch and lots lots more amenities. Count us in! You know, it's one thing to stay in the keys and pay top dollar to be jammed into a park, even if it is on the Gulf. At the Jolly Roger we were cramped, very little room between us and the next guy. No pool, very small laundry, no cable and it was 83.00 a night. THIS IS THE KEYS AND ON THE WATER, FOLKS! There was a deal down the street for 49.95 a night for three nights but that happened after we got to the keys and were locked into our stay at the J.R. We don't mind paying a little more money for this Naples RV Resort, when it has TONS of amenities. We know that next month, staying for an entire month in Texas for a little over $425.00, we will also be saving on fuel, so this allows us to do something special like this for just a few days. This resort used to be for Monaco coach owners only. The current owners snapped it up for a song, and are now offering sites up for auction in February, open to all motorhome owners.  Hm-m-m-m, wonder how much they'll go for?  More about this park tomorrow! Tomorrow we visit Eldy's friend, Mike and his wife. They live about two hours from here....see you then!
Posted by Jeannie and Eldy at 11:30 PM