Naw.....pretty tame if you ask me. I had heard lots of stories about some weird things you would see in Key West at night...maybe for one of their festivals in October, or New Year's Eve, but as we walked the streets last night, we didn't see much shenanigans going on. But maybe my mind selectively filtered out some stuff...We didn't stop to check out the couple of dimly lit bars catering to the more unusual types of shows, or the upstairs bar off the street bar promoting "clothing optional"...So did we get into any mischief? Nope! We behaved ourselves but had lots of fun anyway...here are some things we did see...a creative twist to panhandling on the street...the dog was doing really really well in tips!

We saw a couple of young kids, about 8 and 10 years old singing on the street and playing a mean keyboard and they were doing some awesome harmonizing covers. They sounded almost as good as a young Michael Jackson. (Where were their parents, I'd like to know?) This was pretty late at night! They had quite the crowd around them..

Hm-m-m-m..let's see, weird stuff...ok, how about this? Does this bring back more memories of the '60's? I thought so! Is this stuff legal to sell in stores? 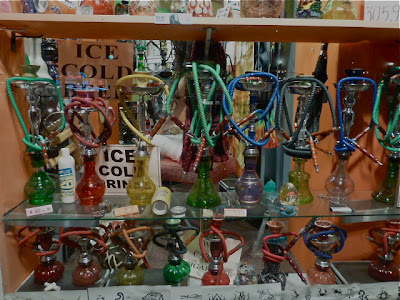 I thought about getting a tattoo, but Eldy would kill me if I did! Besides it's too painful! But these girls don't think so! 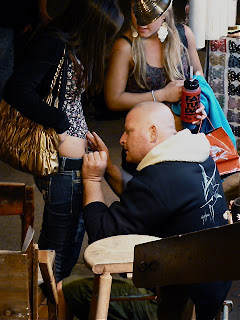 Now Eldy did see a kooky character...she looks like she is having fun, and she was! 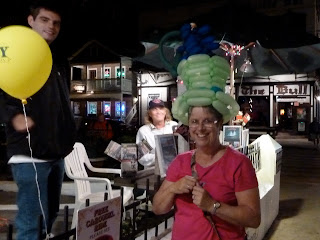 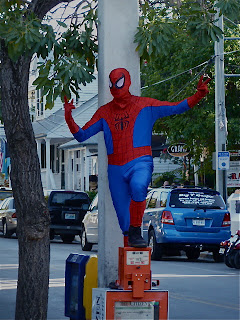 Spider Man was there! Why, I don't know...he did a couple of twirl around and jump off the street lamp pole stunts for passersby....
Of course, the shops had goofy and vulgar tee shirts for sale....this was a tame one, in my opinion...it takes a lot to offend my sensibilities, but there were some really nasty shirts for sale...hard to believe that some people would buy them AND wear them! 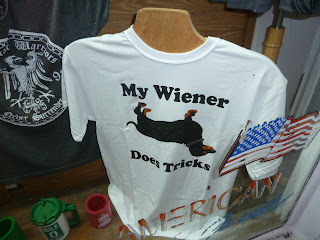 Gosh, there's so much to do here!  There are schooners in the harbor available for day and sunset cruises. Earlier in the evening, we took a dinner cruise out to see the sunset. The cruise was on a catamaran...they provided "island style" buffet dinner (food was ok) and free drinks during the entire cruise, plus a d.j. just in case you wanted to stagger dance around the gently rolling deck while steaming out to sea....I thought it would be fun to try dancing to some of the great island music he was playing, but thought better of it....the sea swells made walking difficult enough as it was! No guarantees on cloud cover...we did get a major cloud in the way of a beautiful sunset, but still managed to see the beauty as it sunk rapidly into the sea....I was silly and didn't bring a jacket so Captain Greg loaned me his sweatshirt, making me an honorary crew member for a short time....if you go out to sea, BRING A JACKET, no matter how warm it is on land! For the last part of our evening, we went to Sloppy Joe's, the drinking establishment Hemingway was known to frequent...we saw a terrific duo, Pete and Wayne...they were vulgar but hilariously funny...as the evening set goes on, they get dirtier with their song lyrics. They were very funny just with their remarks between songs. We had a great time watching them and laughed hysterically at most of their jokes. They finished at 9:00 and an excellent rock and roll band, leaning more towards heavy metal and very progressive music rocked the place for the rest of the night. It wasn't our dancing style of music, so we did decide to leave around 11:00 as it was an hour's drive back to the Jolly Roger Travel Park. If we weren't so tired, we could have stayed and rocked out with them till 4:00 AM!...We wish we could stay longer, but it's pricey! Time to think about moving towards Texas, maybe on Tuesday....But tomorrow we'll have more about the things to do here...we are only scratching the surface...it's incredible how much they have to offer tourists, AND I found a bike trail---whoopee! See you on the trail tomorrow...both biking and kayaking! 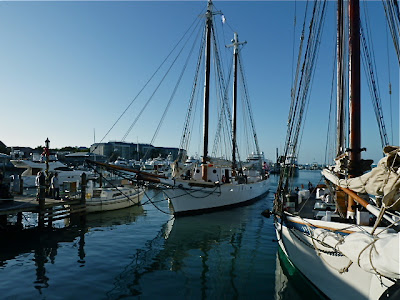 Posted by Jeannie and Eldy at 3:21 PM

Email ThisBlogThis!Share to TwitterShare to FacebookShare to Pinterest
Labels: Key West at night