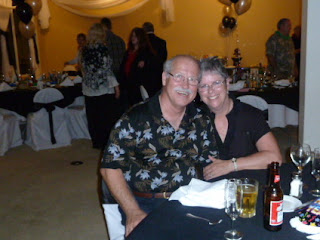 After kayaking for two hours yesterday, and Eldy watching his Notre Dame guys win the football bowl game, life doesn't get much better than that! But to top it off, we went to a shindig at Silas Dent's Steakhouse Restaurant in St. Pete's Beach. It was a small affair, the first year they had a private New Year's Eve party but we thought it was great! The staff was exceptionally attentive, the room where they held it was decorated beautifully and elegantly in black and white, and the food was outstanding.
Appetizers started at 7:00 and lasted till 8:00. You could have had a complete dinner with just the appetizers alone. Then came a terrific buffet dinner from 8:00 to 10:00, then the dessert, flaming bananas foster personally created by the chef, which received a round of applause. For 49.95 a person, it included beverages with dinner, the appetizer buffet, the dinner buffet, the flaming bananas foster dessert, a night of dancing entertainment, and the standard glass of champagne and party favors at midnight. What was great, too, was there was NO smoking! Florida is a state where you can't smoke indoors, love it! Needless to say, we had a great time and danced our sox off, thanks to Darryl, the d.j., who had over 35,000 songs (yep, you read that right!) at his disposal. At our table, we had the fortune of meeting a very nice couple from London, Ontario- Canada. Their names were Nancy and Dave VanderSchaff. They were really great people! I am always in admiration of someone who easily befriends other people as I can be shy in new settings. They very quickly made us welcome. Nancy and Dave have that gift of making others feel at ease and show a genuine interest in the people they meet. Friendliness is contagious and soon we invited another couple who were sitting off by themselves to join our table. By the end of the evening, we all were old friends.

We're moving a little slow today, having exercised more muscles last night than we remember having in our bodies, so we decided to check out the flea market in St. Petersburg and Clearwater. It's supposed to be huge and it was. It was a combination of two flea markets, with everything you could possible imagine...the usual sox, tee shirts and sunglasses and lots more with regular vendors in several buildings, but then they also had individuals selling outside in spaces in the open fields. There was produce and there was entertainment...as we left the flea market today, I heard somebody call out, "JEANNIE!" I looked around, thinking who in the world would know me down here, and that it's probably somebody else with the same name. I looked around the corner of a car, and here comes Nancy and Dave from last night! They had been at the flea market the same time we were, and were leaving at the same time. Not only that, but our cars were parked right across the aisle from each other, back to back! What are the chances of that happening? We chatted a bit then headed home for our campsite....on the way in, we saw the kite surfers' kites at the East Beach in Fort DeSoto...stay tuned for some photos tomorrow of the kite surfers.....see ya!
Posted by Jeannie and Eldy at 7:05 PM