Yesterday we took a trip 30 miles east to the boardwalk/preserves at 10,000 Islands. It was a fantastic day..weather in the low 60's...cold for most Floridians, but we liked it...light jacket weather. We've been here before, but it's the Everglades, and you never know what you'll see on each visit...not surprisingly, as it was so cool for temperatures, the gaters were not out sunning themselves except for one here and there.....what was fabulous to see were the roseate spoonbills. A flock was gathering at an open viewing area along the walking trail. We watched as the flock was far away, and then, they started flying in and coming closer! These are truly beautiful birds....it's only the second time I've seen them. The last time was when I saw one flying along highway 41 when we were driving and it went by so quickly I only got a glimpse of enough pink and rose to know that's what it was....I took these photos with a Canon Powershot SX 20 IS....it's got a 20X zoom on it which helps for nature watching. I need to bring a tripod next time. That lens focus point jumps all around when the zoom is all the way out! I know the pictures extend out into the blog today, but I wanted to make them extra big for extra enjoyment.....I love looking at these birds! 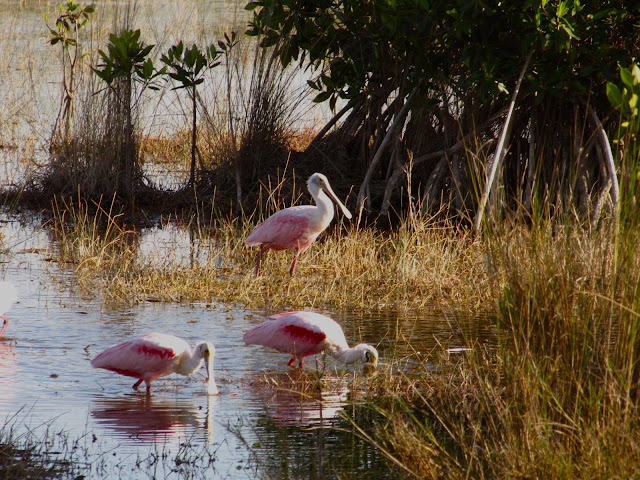 Aren't they beautiful?  And here's another view...We counted at least 14 of them....cool! 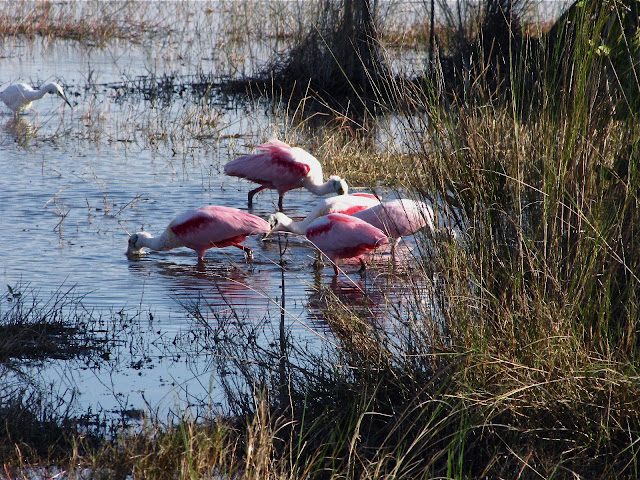 This was a real treat for several onlookers besides ourselves...we watched as they worked their way closer to us, eating their way towards us quickly as the tide seemed to be going out....there's an observation tower that gives you a nice overview of some of the Everglades...we'll go back again and again whenever we are here. There's a little walking trail, about 1.1 miles that takes you through a part of the marshes and water area, but there are not many breaks in the shrubbery and brush along the trail. However, they also have a few park benches spread out where there are viewing openings, which is really nice. And the wonderful thing about it, is it's free! It's a very heartwarming feeling to see all the wildlife here when it is so threatened in so many habitats everywhere else. We enjoyed the return trip home along highway 41, heading west...saw a bazillion egrets, some crested white birds which I think are another kind of egret, perhaps...tons of herons of all kinds...they all hang out on highway 41 in the water canal that parallels the roadway along the banks of the canal...and yes, the gaters are still sunning themselves along there as well. THAT'S the REAL alligater alley, if you want to see BIG gaters. Watch the north side of the road, after mile marker 74 or so, heading towards Naples.....unbelievable all the species of birds and then all the gaters that co-exist along that stretch!

Today is get ready for the Tastefully Simple party this evening at the clubhouse....made Absolutely Almond cake, beer bread, carrot cake crunch cheeseball mix, a spinach and artichoke warm dip mix that has Swiss cheese in it, and a Sensational Caesar dip mix....yum!  There's live entertainment this evening after cocktail hour at the club, so we'll see what that's all about. I hope I have some good sales! It's been difficult to keep Tastefully Simple going out on the road. I have to make 400.00 in sales each quarter to stay on as a representative...can't always get a taste testing party at a campground, as some places consider that sort of a solicitation, but now that we are staying longer in places, I might be able to work the "happy hour" angle a bit more...I really enjoy it, the food is delicious, and everybody loves the samples when I fix them. I've got a website so people can order from there if they are traveling and need to get something later or have it sent to their home base. I can't have much inventory on board because of weight and space limitations, so hope to get the internet going better!  If you haven't seen the website for T.S., here's how you get to it.... tastefullysimple.com/web/jsparks3  It's a very classy company..if anybody wants to do a catalog book party, you can get any item in the catalog half off if you get someone else to book a catalog party!  Let me know...I promise I won't mention Tastefully Simple again in my blog  except to state I fixed food for a party!

Zumba was fun this morning! I found out that now having done any official exercise classes for quite some time, that I don't have the good balance I used to!  Can't stand on on  leg and do the hamstring stretch any more without falling over! Darn! Great music, Latin tempo, lots of salsa and cha cha moves, the instructor was not quite as "loosey-goosey" with the swivel hips and wiggles as  some zumba class instructors I've seen, it was sort of low key zumba. Wonder if that had anything to do with the average age of the gals that came to class this morning? About 55 or older....that was probably a good thing, as a lot of parts on me don't swivel and move very well any more...I plan on going back to try and loosen those parts up next time the class is offered, next Wed. and Friday...see you tomorrow! It's going to get in the low seventies tomorrow...YEAH!
Posted by Jeannie and Eldy at 11:30 PM

Email ThisBlogThis!Share to TwitterShare to FacebookShare to Pinterest
Labels: preserves and sanctuaries in Naples