Seven and half hours of driving thru LOTS of construction and cement barrier walls..Eldo is a little stressed out this evening...(I knitted a LOT today.) I even got rattled sometimes myself, and got lost in where I was in my knitting pattern so I had to unravel and start over. Sometimes there very little stress in driving long distances, sometimes there's a LOT. Today we tried to stop for diesel fuel at a place and the truck/car lane entrance and exits were not clear from the road. We took a chance, pulled in, and OH, CRAP! We went in the "NO TRUCKS" entrance. There was a reason for that. The lane to the back of the station was blocked. We got too far into the gas station to be able to turn around. So-o-o-o-o, while Eldy was about to do the Christmas Story movie father routine (when the dad is down in the basement trying to fix the furnace which is spewing black soot all over the house, and cussing up a storm but you can't tell what he's yelling, you just know he's saying every cuss word in the book), I tried to calm Eldy down..."It's ok, honey...we'll just unhook the car, you can back up and turn around. Besides, I needed to run the car a little anyway"...or run the risk of a dead battery upon our arrival. We unhooked, quickly, and we got turned around just fine...it's just stressful at the time it happens. And it didn't help that some idiot was parked right at the entrance of the gas station, engrossed in his cell phone and didn't see us trying to come in, which made our entrance all the more difficult...I told Eldy he should have leaned on his dual Hadley air horns (which sound like a huge semi's horn) which might have made the guy sit up, take notice and have to use the restroom, er, MOVE, but Eldy is a nice guy and he wouldn't do that. Hm-m-m-m, another reason for me to get in the driver's seat? I LIKE the sound of those dual horns--they're AWESOME! 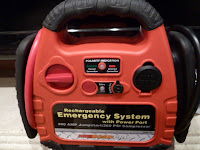 We are here in TEXAS, at the Galveston Bay RV campground. And of course, after seven hours, the car battery was dead when we arrived...but now, we don't get out of shape about it..we just whip out our trusty battery charger and within two minutes, the car is up and running again...best 69.95 we ever spent on accessories for the motor home!

This is a nice place, much prettier than where we stayed last in New Orleans...very informal check-in. No rules sheets, no instructions, no password for the wi-fi. We'll get all that tomorrow and get the info on everything near to here...can't wait to see my daughter, Kerry, who lives in Texas, about an hour from here. She's got all kinds of plans for mother /daughter time. She's a free lance writer, writing stories for preteen girls and going to school to become a teacher...we're going to spend all day Saturday at a festival to promote her books she's written. And we're going to YAK all day and catch up! I haven't seen her since her birthday in early September. 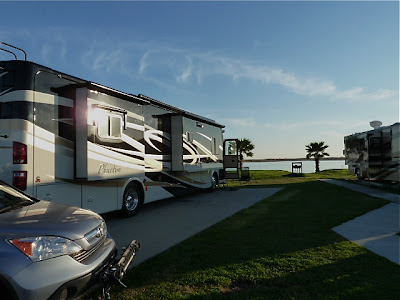 Our site is on a bayou. We are out in the open, no trees except for the lovely palm in front on the bank of the bayou....not much across the way to see, and not sure what lies on the other side, but we're looking forward to a great stay here...$450.00 for a whole month to be on the water--free wifi, no cable, water, sewer, electric is extra. This will be the longest we've stayed in any one place. The only thing we're worried about is the wind and our awning toppers. Eldy noticed some people have taken their awning toppers OFF. He's been reading reports about the wind here at this particular place and Texas in general, so we're going to have to watch and wait and see. The awning toppers make quite a racket when there's any wind over 20 mph. and it's really hard to sleep. It sounds like they are going to be ripped right off the coach, they bang and flap so much! We'll see what we need to do when the wind returns....we can always pull in the slides for the night...he's a worrier, that Eldo! See you tomorrow!
Posted by Jeannie and Eldy at 10:02 PM