It's a miracle! Sort of...Sparky and Eldo got their usual monthly mail from Alternative Resources, the mail forwarding service they use out of Sioux Falls, SD. Inside amongst the usual statements and bills there was a small package with the return address of Acadia Dispatch on the front. Sparky started getting excited!   Inside the package....DRUM ROLL PLEASE.....Sparky's lost set of car keys that she dropped somewhere on the Giant Slide Loop Trail at Acadia National Park about five weeks ago! 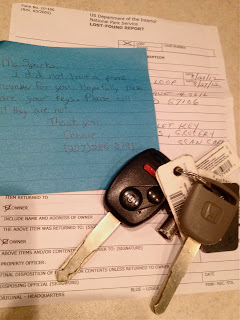 WOO-HOO! Sparky started yelling, "ELDY! YOU'RE NOT GOING TO BELIEVE THIS!!!! It's the KEYS! THEY FOUND OUR CAR KEYS!!!!" Can you believe that???? What are the chances of somebody finding them before the year was out, in the grass, on the trail somewhere before the snow hit, before the rain totally rendered the automatic lock useless? They still work great! Sparky called the dispatch office immediately, curious about where they turned up to see if the office knew, but the lady who mailed the keys wasn't there.. Gonna call tomorrow and see if a location was mentioned...just curious! 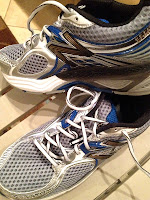 The rest of the day was anti-climactic....Eldy got a new pair of shoes from the New Balance store in Granger, IN.  He's the kind of guy that will wear holes in his soles before he breaks down and gets a new pair. And he wonders why his back hurts and his knees hurt! And then, when he gets his new shoes and his feet sigh with relief and say, "Oh, thank you, thank you, THANK YOU!"  he wonders why he waited so long to get new ones! (Because good shoes cost an arm AND a leg! explains E.) The New Balance Store takes your old shoes and donates them to a good cause.

From there, we hit the Apple Store...always an interesting place with all kinds of people in there.  Sparky loved the kids' table where they have round balls for the kids to sit on while they play on iPads. A round ball helps kids' ground themselves with their center of balance and it helps them focus and pay better attention while they sit on them! Way to go, Apple! 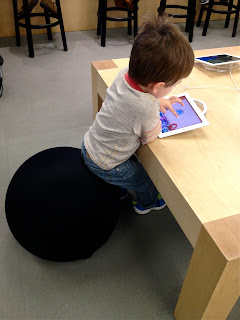 We upgraded our software on our computers so we didn't have to use our own bandwidth. Sparky upgraded her computer to Mountain Lion, the latest operating system for Macs hoping to keep the level of security high enough to not have to purchase anti virus software. Apparently, the operating system now makes software companies get permission to access the operating system to help keep the hackers out. If Apple doesn't recognize the software company, it could conceivably block the software installation. What you do after that happens, Sparky isn't sure! It hasn't happened yet!  Speaking of apples, how about them Apples? Guess the iPhone 5 is going to boost the economy just about all on its own. Wish Sparky had bought some Apple stock way back when. (So does 85% of the rest of the country laughs E.).. That's as far as Sparky is going to get into the economy discussion. Back out she comes!

Eldy just got his iphone 4S upgraded on the operating system, and now Siri, the "personal voice assistant" has been updated as well. He's busy asking her what the scores are on various football games and when Notre Dame plays again. He asked about the Michigan/Notre Dame game knowing full well the outcome and Siri gave a quarter by quarter score card! 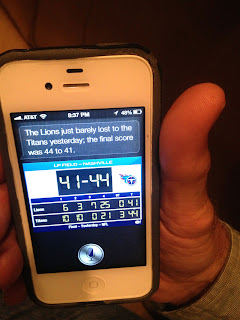 A dinner at Texas Roadhouse for the 7.99 Monday thru Thursday special  4:00-6:00 PM (several meat choices to pick from, salad, cinnamon butter with fresh hot dinner rolls, a salad and a potato) topped off the day with a special guest appearance here at Texas Roadhouse. Eldy keeps saying each time we come to Elkhart, "I wonder when I'm going to bump into someone I know here in Elkhart?" Tonight, he kept looking at the guy sitting behind us. It turns out that it was Bill Beck, Eldy's mentor from his first main job, 46 years ago (!) at Blessings Music. Bill is president of MSI, a company here in Elkhart. Bill was shocked to run into Eldy and it took him a little time to remember, guess he didn't recognize Eldy without so much hair! :-)  They had a great, although too brief chat, but Eldy plans to look him up again soon.....Bill was a great mentor and friend to Eldy in his young days, and taught him a lot about life. Eldy really looks up to him and appreciates the life lessons he received from this great guy.....

Another great day in the life of retirement......
Posted by Jeannie and Eldy at 11:58 PM