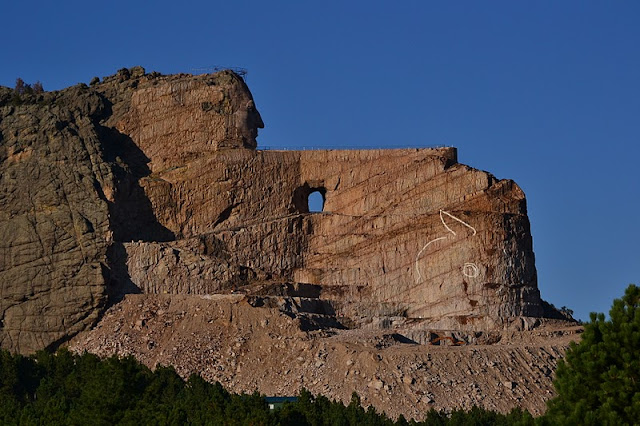 From the first blast in 1948, when ten TONS of rock was removed, millions of tons of rock have been removed from the Black Hills of South Dakota since to form the world's largest mountain carving, Crazy Horse. We went to the beautiful visitor's center at the Crazy Horse Memorial today, to learn more about it. 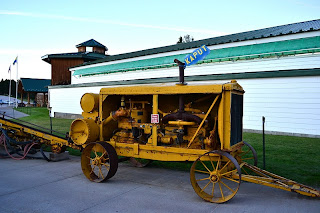 The sculptor, Korczak Ziolkowski, singlehandedly started this mountainous project in his forties, refusing to take any government money for his efforts. Korczak was invited by the Lakota Indians to carve a statue to remember the "red man heroes". Korczak had 174.00 to his name when he started. He battled a balky compressor which he called "Kaput!" because it quit on him often, and often after he climbed many many hand built stairs to get to the top of the mountain, only to have the compressor quit, and back down he would go to crank it up again to get power for blasting his way through the mountain. It is absolutely incredible what this man had to go through all by himself when he first started.  He believed Crazy Horse should be built by the interested public and not the taxpayer and turned down offers of federal funding more than once. To this day, his family (7 out of 10 children) and his wife have carried on with his dream. (He died in 1982) and this memorial is totally funded by private donations and visitor admission fees (10.00 per adult). 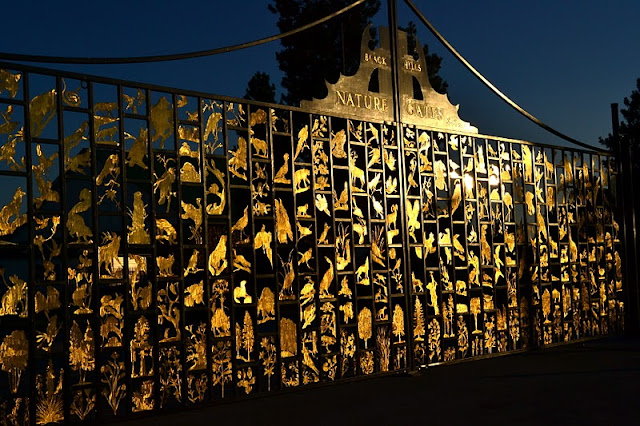 The visitor's center is beautiful....From the nature gates on the outside to the start of the video inside the theater, to the Indian Museum of North America, to the Cultural Center, to the sculptor's studio home and workshop, it is a fascinating tour of this man's life and his family. We saw the scale model of the statue, 1/34th the size. If you are there during the day, you can view the blasting going on...We went at dusk in order to see the laser light show, which happens nightly from May till October. We enjoyed that, but the laser light show was inconsistent in brightness and difficult to see sometimes. Still it was very patriotic and cool to see, even if it wasn't the best performance. It culminated in lasers outlining the statue as if it were completed, which was awesome! 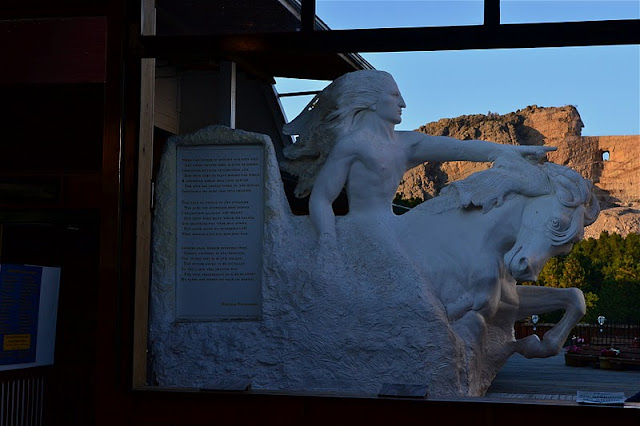 To give you some idea of the magnitude of this colossal project, the head is 87 1/2 feet high, the hand is 33 feet long, the mane of the horse will be 62 feet high and the arm is 263 feet long. The arm is pointing to "where my dead lay buried," Crazy Horse's answer to a white man's derisive question, "Where are your lands NOW?" The height of the final carving is to be 563 feet high.

There is a heart wrenching letter written in 1949 by the sculptor explaining the meaning of the carving, and how the statue is not so much the likeness of Crazy Horse, as no known photograph exists, but it represents the spirit of the Indian people...and THEY chose Crazy Horse to be representative of the spirit of their people and Korczak to carve it.

We really enjoyed our tour today of the facilities, and  highly recommend this self-guided tour of some amazing native American artifacts housed in three huge exhibit halls-- clothing, teepees, beadwork, tools, implements, rugs, native tribe flags, and many many other interesting things to see, learn and purchase....Tomorrow we leave to head towards Sioux Falls, boondocking at Cabela's in Mitchell, SD, home of the world's only CORN PALACE. See you there!
Posted by Jeannie and Eldy at 11:30 PM