We arrived at Tetonia, Idaho, just across the border from the Grand Teton National Park early today, around 1:00 PM, at the Teton Mountain View Lodge and RV Resort--a Passport America park, so we've got three nights for 46.00 and some change. So we decided to head to the visitor's center at Grand Teton National Park to pick up the national park's newspaper, which is always good for information, more brochures, and tour ideas (but we probably aren't going to do any, our budget belts are so tight we're about to pop!) They are fun to look at even if you decide not to do them. 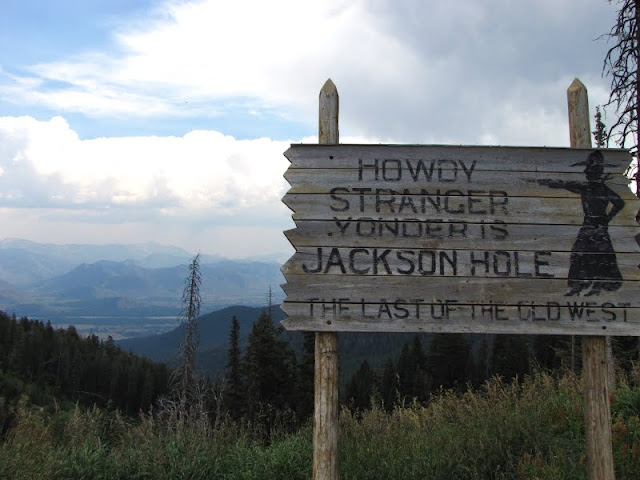 We drove along highway 22, over the Teton Pass (over 8500 feet!), and stopped briefly to check out the amazing view of the Teton mountains at the top of the pass before heading to the park. The view in the valley was incredible! Sparky got all excited about a historical wagon trail hike and she thinks Eldy is agreeable to trying this hike soon. (She does, does she!? We'll see, says E. First we are going to get trail maps from the ranger station) A good idea, Eldo! And then a hiking we will go, a hiking we will go.....

After picking up a PILE of paper goodies and freebies from the visitor's center, which was an amazing place and very beautiful, the Craig Thomas Discovery and Visitor Center, we headed over to the town of Jackson Hole for a bite to eat. What a cool looking town loaded with all kinds of shopper's delights and tourist traps! But -- the stores were awesome, anyway, especially the hat shops--more varieties and types of cowboy/cowgirl hats than you can shake a stick at. (Don't tell Sparky, but I didn't see any yarn shops, thank goodness, says E.) Sparky hasn't looked for those, yet, because she needs to stay out of them for at least a month!

This town has character! The Million Dollar Cowboy Restaurant looked good, but as the name suggests, it was an expensive steak restaurant, and although it looked really really good and we have some really good recommendations from our traveling friends, we skipped it and went for lighter fare at the Tavern on the Square. It's an upstairs restaurant with some outdoor cafe seating, so we sat outdoors and looked down on all the people (in a nice way!) The food was wonderful and very reasonably priced! We both had tavern cheeseburgers (6.95) and they were delicious! 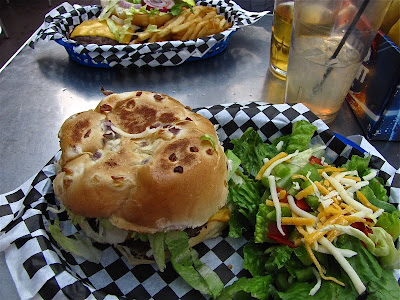 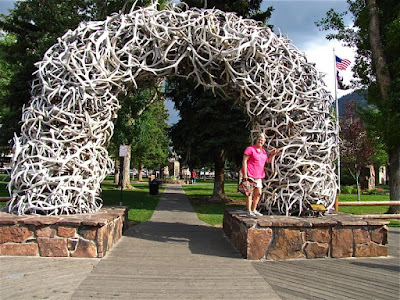 After supper, you gotta get the required tourist photo of standing in front of one of four antler arches on the town square, so we did that....A big thundercloud was rolling in off of the mountains, so in the car we hopped and headed out to the park. What did we see long before we actually got into the park, but a double rainbow!

The Tetons are a spectacular backdrop for the drive into the park. From what we saw on our first day here, there are terrific hiking/biking trails throughout the park, so we'll probably be doing some biking while we are here.....(And it looks pretty level, so I'm in, chimes in Eldy).  Yay! says Sparky.
Moose Trail #1--we had heard from the rangers that traveling from Moose Entrance (just outside the park gates on the south side of the park) past the Lawrence S. Rockefeller Preserve, down the backroads till you connect to 390 heading back to Wilson, was prime moose habitat. And it was--but there were NO MOOSE visible today. Phooey! We're gonna go moose hunting every day while we're here, (Sparky is DETERMINED to get her moose photo and when Sparky sets her mind to it, there's NO WAY in H*** she's going to give up until she gets her moose! sighs E.) It might be a NO-GO or NO SHOW, but she's still going to try, and Eldy is still willing to drive....Bless his heart!
BUT--even though we didn't see moose, we did see elk--LOTS of them! We saw a whole herd just south of Teton Village. You could tell the males were restless...There were three of them, two with big racks, and they were moving around, checking out the females, sniffing their butts, (it's a good thing my schoolkids aren't reading this blog! They'd have a field day with that!) but the females apparently weren't in heat yet. The males were also checking each other out, as one big one ran off a younger male. 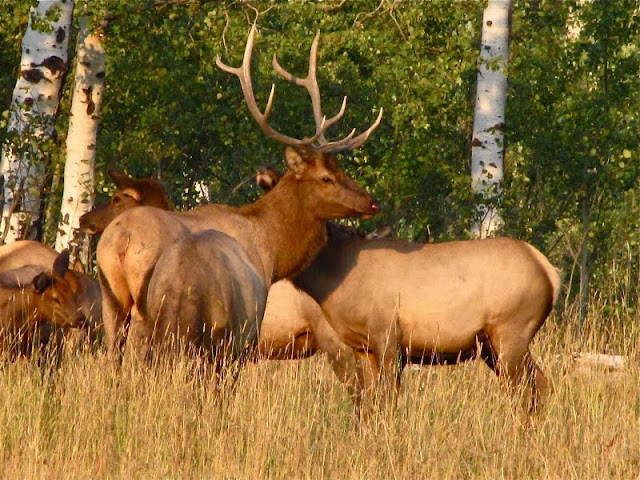 It was a beautiful drive on the back roads coming back through some little towns on the way back home today..This is my favorite time of day, dusk--when the sunlight dapples through the trees, it's just a wonderful time to be out for a drive, even if we didn't see any moose....See you tomorrow....
Posted by Jeannie and Eldy at 11:54 PM