A White Knuckled Drive From Cody to Sundance, WY?

Not for my Eldy....(Heh, heh, heh....she wasn't looking at the steering wheel or she would have seen otherwise! confesses E.) Actually, I was busy making stuff for the craft sale at the rally coming up at the end of the month. I have such supreme confidence in Eldy's driving abilities that I don't worry unless I smell something burning...Which I did...

"What's that smell?" I sweetly asked my honey on the drive today...."It must be the brakes, I've had to lean on them pretty hard driving through this pass just this last stretch." "Oh--I wondered what that was!" And I'm also wondering, do we have any brakes left? Is there any smoke coming out of the Honda being towed in the back? Did I forget to release the parking brake? Is there smoke coming out of the wheels on the motorhome? No, no, and I never put the parking brake on the CRV in the first place so I WON'T forget to release it, and-- no. Whew! But I did keep checking the rear camera for a few more minutes looking for smoke! However, the brake smell went away quickly, and I went back to my crafting.... 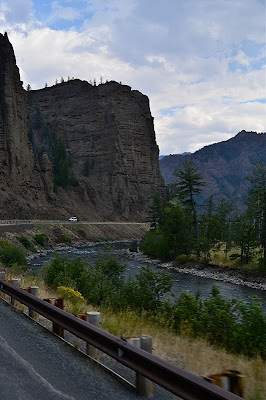 We had stopped in Cody at the visitor's center to ask what's the best way over the Bighorn Mountains to Sundance? There are two major passes of over 9,000 feet plus, and we thought about avoiding them all together by heading north up to Billings, Montana, then coming east, then back south. But the visitor's center asked a few questions about what we were driving, what we were towing, then recommended highway 14/16/20 from Cody to Greybull, then 789/16/20 south, then 16 east all the way as being the easiest of all three choices over the mountains, AND it was supposed to be a great scenic drive---it was! Eldy says if that was the easiest, he'd hate to see the other two. What was interesting is we crossed the highest pass, (9,666 feet) but yet the road had less switchbacks than the other choices, they said. Eldo was in third gear most of the time-- Gearheads (ladies included)  will know what that means...I'm not sure, I just know that he had to use his brakes hard on top of the exhaust brake to keep his speed under control. He did a great job, I had no idea what a challenge it was. Had we had the old Challenger gasser, I would have been the one with white knuckles and we probably would have had to pull off the side of the road so I could use the bathroom, or go hide my head under the covers in the back. That RV would have been so engine challenged to get over the mountains! It would make a very loud whining sound when the engine was pushed to the limits, so we're glad we have the more capable diesel pusher now. We got 'er done, and Eldy feels that was a valid recommendation as to the route to take for the size motorhome we are (40 ft. diesel and with a tow).  Spectacular views for a majority of the way....(But not for the driver, Eldo wants you to know. You are too busy watching your gauges and the road!) It was not one of those routes where the cliff drops right off the edge of the road like the Going to the Sun Road in Glacier, it was just lots of climbing and steep grades downward--some were 10% grades. 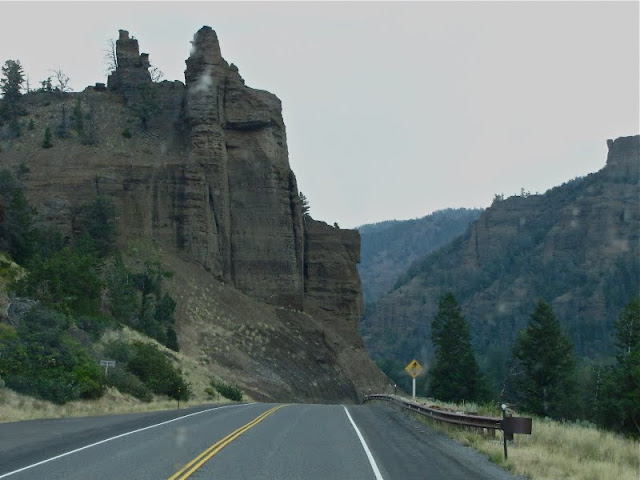 We made it safely to Sundance, WY...And NOT the Sundance Robert Redford is famous for, just so you ladies know...Boy, is that showing my age! Robert Redford is getting OLD and you don't hear much about him any more....We are at the Mountain View RV Park and Campground in Sundance, WY. The rate for this park is 16.00+ a night (Passport America). And we just happened to get a site right next to our friends, Sherry and David Boyd! (In the Direction of Our Dreams) We'll be here a total of two days. This park is a no frills park as far as sites. Fairly close together...They have a very small swimming pool which was still open (!), laundry, game room, hot showers, propane fill, wireless internet which was very speedy, 30/50 amp sites and some pull thrus. Our Verizon air card worked very well, AT & T phones were full bars and no problems.
There are lots of attractions here in the area--Devil's Tower, for one (the famous rock/cliff that was in the sci-fi movie Close Encounters of the Third Kind.  Other points of interest are the Vore Buffalo Jump, (where native Americas herded the buffalo into a deep pit to slay the buffalo) Warren Peak fire tower, Deadwood (old historical western town), and Spearfish Canyon. We are only going to be here one more day, so won't be able to see much. We mainly stopped by to see Sherry and David. Sherry is behaving herself and staying off her ankle as much as possible. David is doing a good job of attending to her needs and she is managing to do some activities despite the ankle.
Today is a very foggy day, we're socked in....looks like a "take it easy" day. Tomorrow we leave for Custer!
Posted by Jeannie and Eldy at 11:41 PM

Email ThisBlogThis!Share to TwitterShare to FacebookShare to Pinterest
Labels: driving from Cody to Sundance, WY