My, oh my! We didn't know we had such talented "ladies" among our midst! Every year that we have attended Nick's Gypsy Journal Rally, Eldy heads the other way when he sees Nick coming a couple of days before the beauty contest. Nick always makes the announcement the first day of the rally that he's looking for men in touch with their feminine side for the contest, and if he doesn't get his recruitment quota as the contest approaches, he comes looking for guys to agree to be in it. What do the guys get out of it? A whole lotta fun and a chance to help a charitable cause. This contest was called the "Buckeye Beauty" contest. When we were in Arizona, it was the "Cactus Queen" contest. In Elkhart, IN last year, it was the "Hoosier Honey" contest. It's a riot!

The men get dressed up in the craziest, goofiest, most daring womanly outfits, embarrass the heck out of themselves, and the hilarity that ensues guarantees that somebody is probably going to pee their pants from laughing so hard as the event unfolds. Nick makes up really crazy stories to go with each "persona" that is invented, and reads the contestant's "background" while each one sashays down the aisle on the arm of an almost equally embarrassed escort. They wiggle (or waddle, as the case may be). Eldy was an escort last year, and I never have seen his face as red as a ripe tomato before! The "ladies" ham it up, usually one ends up kissing Nick with bright red lipstick on his bald head, fanning their own body parts or something similar, and the raunchy humor and jokes that follow Nick's interviewing each "contestant" guarantee that SOMEBODY in the audience is going to be offended. BUT--you can't say you weren't warned. Nick says ahead of time, "If you are a person who's easily offended, you probably ought to leave now," but nobody ever does until it's too late! 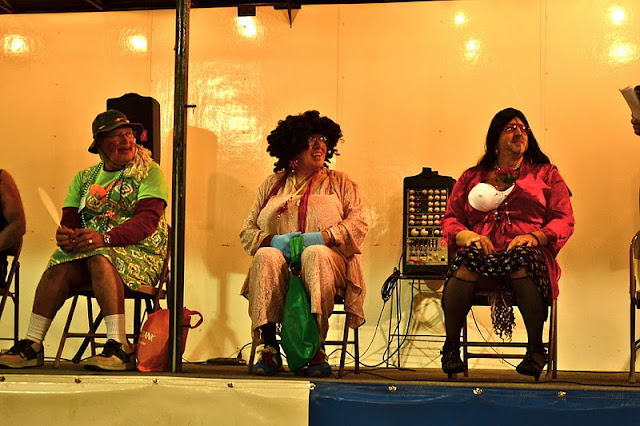 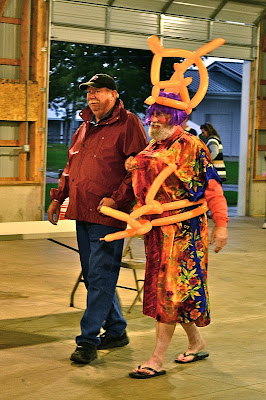 We had a great time last night, and there is one more night of door prizes....and the Washtub Two are going to play again Thursday night. They did a great job Tuesday night of entertaining the crowd, and even had Miss Terry and two other gals hamming it up on kazoos! (Sparky is still holding out for the Sea Eagle kayak, wish her luck! She needs all the luck she can get!) Tomorrow is clean up day at the rally, and Eldy and I will think about what other things can we not do without as far as RV supplies--he's got his eye on the "waterless" wash and wax system designed by a plane engineer and Boeing aircraft approved. Anybody have that or used that? So far we've purchased a couple of handy dandy gadgets for keeping your hoses under control, gotten our insurance updated and reviewed by an excellent couple that sells RVer insurance, and learned some driving tips and tips about systems in our RV. We've got a couple of seminars this afternoon and will report back tomorrow. In the afternoon, we'll be heading for Elkhart, IN our next destination, family here we come!...Bye for now!
Posted by Jeannie and Eldy at 11:00 PM