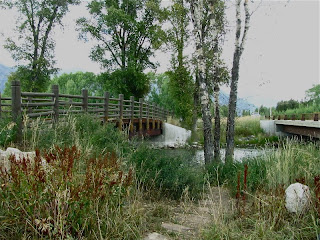 I did it! I got Eldo out on the bike trail for our last day here in Tetonia, ID, and boy, did he ride! He went 11.1 miles round trip on the same bike trail I went on yesterday, the one from the Teton Transit Center down to Teton Village...and we saw some more pretty views....Above is a little creek rest stop on the way to Teton Village...They have a couple of really nice places to stop and take a breather along the trail. 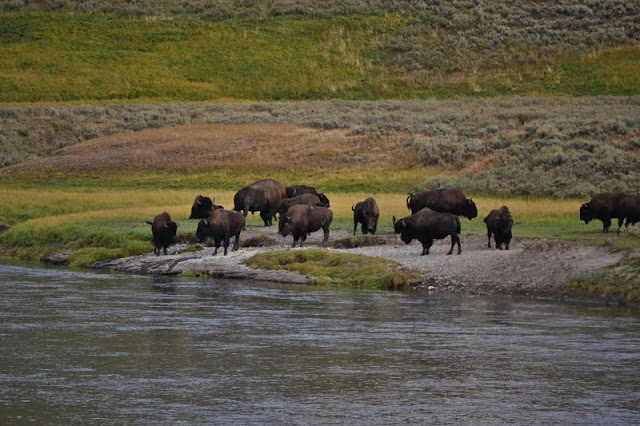 Yesterday we left Tetonia for the route to Cody/Wapiti--....It was an amazing drive! We decided to avoid Teton Pass and instead drive the motorhome and tow through Yellowstone--all the way through the park to the east entrance and on to highway 14/16/20 straight to Cody.....It was wonderful sitting up high in the motorhome and seeing herds of bison that we hadn't seen in our many trips through the park. The herds are back in Hayden Valley causing several traffic jams. One was for bison right by the side of the road, I mean just a few feet from the motorhome window. Sparky wanted to hop out the front door of the motorhome to get a shot just inches away from this big guy, but Eldo wanted to keep rollin' in the MH so the bull wouldn't get any ideas about butting the side of it! Sparky got a photo out the rain spotted window, but it doesn't look as close as he really was! We were looking eye to eye! (Glad I kept moving! exclaims Eldo). Yeah, especially since he turned and started coming toward the window after I snapped the shot, then crossed the road behind us! 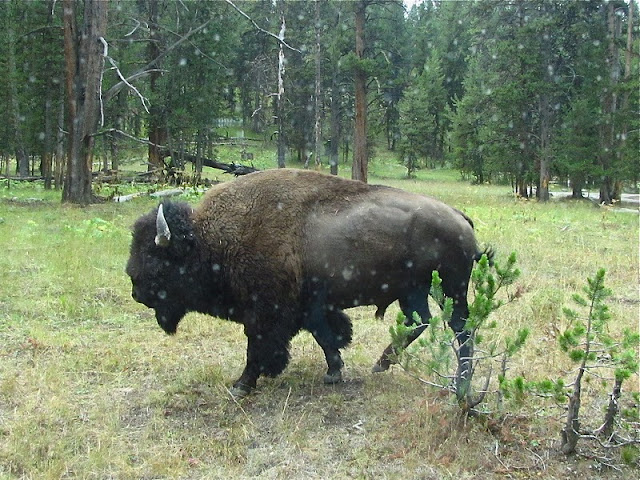 There was another traffic jam of at least 40 cars. We think it was a bear jam because there were no bison in sight by the time we passed through the clog, and there were steep hills on both sides of the road. Sparky was so disappointed that she didn't get to see a bear! (Not me! says E., with relief! I didn't have to buy that 50.00 can of bear spray to protect my impulsive Sparky!)

The drive through Yellowstone towards the east side had downhill switchbacks which required total concentration by awesome Eldo! Sparky was in the living room of the motorhome with both windows open on both sides of the coach, screens and all. The wind was whistling through the coach, and Sparky was flip flopping back and forth between the sides of the coach taking photos and exclaiming how fantastic the views were! If Eldo hadn't been negotiating curve after curve, he would have sworn the coach was rockin' there was so much movement in the back! She couldn't make up her mind which side to stay on to take photos. She was sticking her head so far out the window, people were laughing to see this crazy woman poppin' in and out of the windows with the camera sticking out. (It's a good thing you didn't get smacked by another big RV passing us by! says E.) Back and forth, back and forth she went and here's what she saw.....charred trees with new undergrowth changing to fall colors, making a stark contrast to the black trees (we saw forest fires in the distance and saw and smelled the smoke even closer....) 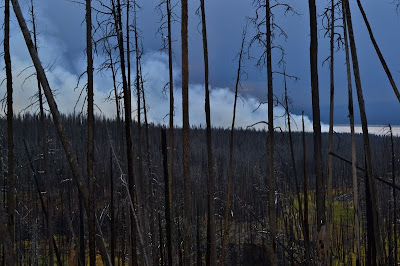 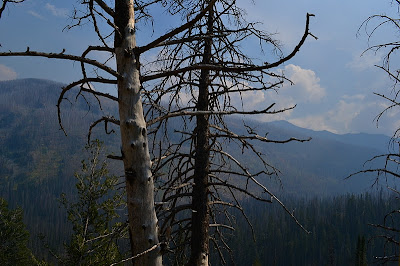 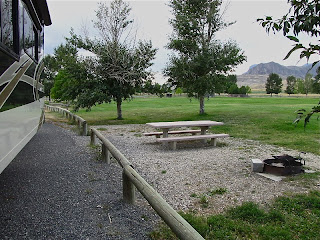 We made it to Yellowstone Inn and RV in Cody/Wapiti...supposedly a Passport America Park, BUT--it's not any longer! We didn't want to pay 31.00 a night, even with a Good Sam's discount, so on we pressed a little further.  We decided to stop at Buffalo Bill's State Park....We officially boondocked! Yay! Seventeen dollars a night, no hookups, but water was available and there was a dump. If you are a Wyoming resident, it's 10.00 a night, a little more reasonable...But the views---WOW! (See above photo)

We had a nice long pull through site...nice separate picnic area, there's a great playground in the middle of a huge field for families with children, and there is a campground section along the river that runs by the state park into the Buffalo Bill Reservoir. The campground was far enough away from the highway, so it was a very peaceful overnight stay. I rode my bike around the park for about six miles before calling it a day......Tomorrow is a big driving day, 300+ miles to Sundance, WY. We're going to catch up with Sherry and David, In the Direction of Our Dreams, to see how Sherry is doing with her broken ankle, and how David's holding up with Sherry, lol!
See you tomorrow...on the road through the Bighorn Mountains.....(Uh-oh! There are some 9,000+ foot passes on two out of three possible routes, worries E.) We'll see what Eldo decides to do!